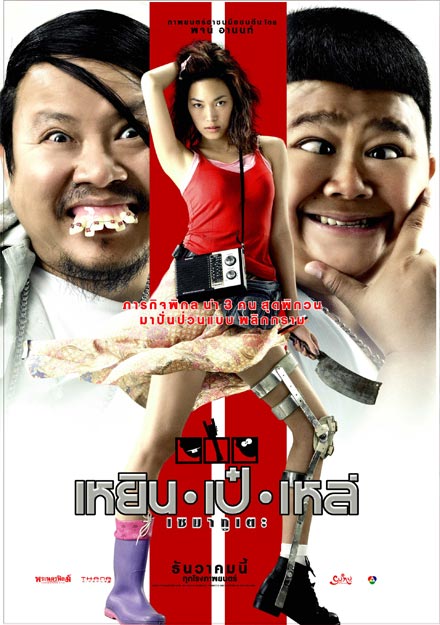 Yuen(Chaturong Mokjok) drives a taxi bus for a living, he decides he wants to get rich by joining the mafia gang. He invites his buddy Leh(Kohtee Aramboy) to join in with him. As Leh is crooked eyed, the two enter into hilarious mischief. Both made a pact that if one dies before the other they will both donate eyes and teeth to one another.

Both then decided to invite Peh(Pitchanart Sakakorn ) a pretty one legged cripple woman who sells fish in the market place who is also the girlfriend of Sahas(Thanakrit Panichwit) a young police officer to also join in the gang.

All three join Mr. Tok Kueng (Chalermchai Mahakejsiri) Mafia gang. One day he threw them a job to kidnap the son of a wealthy millionaire studying in an International School. As the van pulls up Leh and Peh rush to pull garbage bag over the victim and pull him into the van. The van speeds away only to find that they had kidnapped the wrong victim. The victim’s name is Sungwoo, the son of Mr. Boh (Eakchai Sriwichai) who has a big influence over the province and Mr. Tok’s big boss. All three then decide to release Sungwoo in the temple but the troubled Sunghoo refuses to go. All three must take in Sungwoo. While being hunted down, they all find a hiding place in the Karaoke shop owned by Ms. Pai (Panadda Wongpudee). Her employee Priew (Ashita Thanasattanan) falls secretly in love with Yuen. Mr. Tok’s gang tracks the four down to the Karaoke shop and they all quickly flee.

Mr. Boh also announced that if anything happens to his son, all three will be brutally tortured. What will become of them all is yet to be seen.