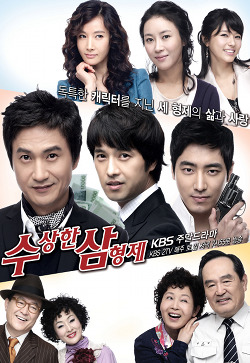 "Sesanghan Samhyeongje" explores the lives of three brothers and their marriages. Keong-kang (Ahn Nae-Sang) is the eldest son, who remarries at the chagrin of his father Sun-kyeong (Park In-Hwan). Middle son Hyeon-chal (Oh Dae-Gyu) is the pride of the family, with several successful businesses, but suffers with a less than ideal marriage. Youngest son Lee-sang (Lee Jun-Hyeok) follows in his father's footsteps by becoming a police officer, but raises the ire of his father by marrying the daughter of a bitter foe.

Madeleine Nov 22 2020 6:41 pm I loved this drama. The cast, the story, everything. This really was funny, sad, bitter and sweet all together. I recommend it to anyone who enjoys a good story about family, and marriage and romance. Has it all.

kdramaloverabb Jun 25 2018 7:20 am this was one of my favorite k dramas as a child and I re watched this now. It is a mix of comedy and there are also sad moments. I will totally miss the casts since the show is over.

K-fan Dec 23 2015 8:40 am oh my so few comments on this drama. funny, warm story line supported by good acting from the cast. Ahn Nea-Sang is my favorite actor. He can portray both rascal and heroic characters well.

she Feb 01 2015 5:28 am wtf they are spoiling the eldest son that is so not good. he needs to be independent and responsible

franklyn May 26 2014 11:47 pm The mother inlaw needs to be taken care of by WWE champion..UNDERTAKER bt its just a series and its captivating

Asie May 19 2013 7:45 pm Watching this now, and I am beyond irritated with the eldest brother and the mother in law... Apart from that I am enjoying this... I have been watching it all day

You're just jealous that I'm prettier than you, and I got both Isang AND Donghae