This Guy is the Biggest Mistake in My Life 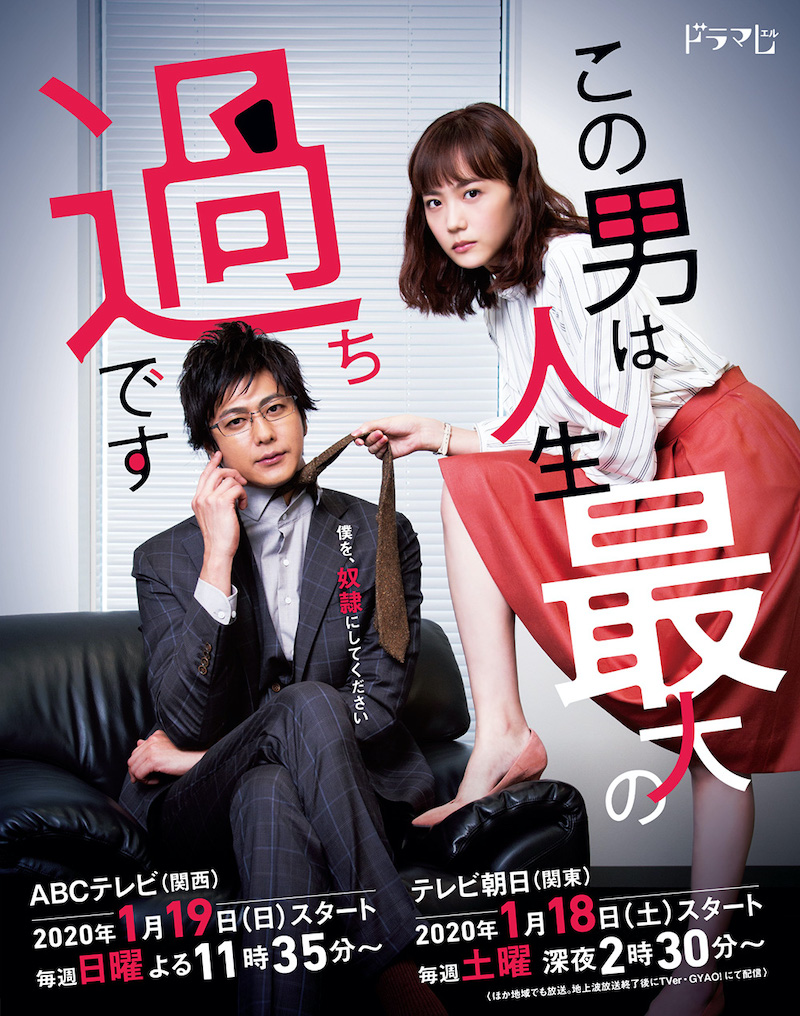 Yui Sato (Airi Matsui) is a dispatched contract worker at Amagi Pharmaceutical Company. Her pet has died and she feels deep sorrow over its death. One day, she drinks alone at a bar and shouts, with tears running down her face, "Develop medicine to bring back someone to life!" At that time, a man walks towards her. He makes a spiteful remark that that there is no such medicine that can bring someone back to life. He also tells her to stop barking and to go home. Yui Sato feels anger within herself and she trips him. She then leaves the bar. Yui Sato is unaware that the man she tripped is Kyoichi Amagi (Mokomichi Hayami) and he is the CEO of Amagi Pharmaceutical Company.

The next day, Yui Sato hears at work that the CEO is looking for her. When she gets to his office, she realizes the man she tripped in the bar is the CEO. She thinks that she might she get fired, but he suddenly tells her to "Please treat me as a slave."

shun's_hardcorefan Jun 09 2020 10:36 am somehow it remind me of old comedy from jdrama long ago? bcos i remember i just laugh out loud when i watch this even though i thought myself not to laugh out loud +_+

the comedy is gold xD i really cant with the president (but he really is a creep). i think this the first jdrama that i watch after a long time. so, i think it ok. it just that hmmmmm the ending is a bit of ummmmm how to say, not satisfy? ending was ok buttttt i really want to know one thing.-------spoiler alert--------------

Andechi Mar 31 2020 11:15 am It's hilarious, fast paced, and refreshing as expected from Mokomichi Hayami. I like all the leads character!!

Ame Feb 21 2020 5:01 pm I love this dorama. Its really funny specially when Yui chan hits Kyoichi. Mocomochi and Airi are so cute together. Kyoichi might be a little creppy but I think its so sweet the way he cares about Yu chan.

Burj sofita Feb 17 2020 5:14 pm i like the humour and the opening soundtrack very much. But why Ml has to be the ceo again. why can't he be her team leader or someone else? so corny.

Ryo-chan Dec 02 2019 12:23 pm This drama seems interesting to me. The character named Kyoichi Amagi played by Mokomichi Hayami is a masochist type because he liked when he was humiliated by the main female character named Yui Sato and this drama story sounds interesting to me because I can't wait to find out what kind of relationship the two main character will have. The drama named kimi wa petto for me is not the same like this drama because in kimi wa petto the main character named Sumire Iwaya met Takeshi Goda aka Momo outside of her house when he was find in a box. Then they made an agreement that he could stay only if he became her pet. The only thing these two dramas have in common is became both people pets had died but other then that? This drama and kimi wa petto have nothing in common with each other.