The Youth in Bare Foot 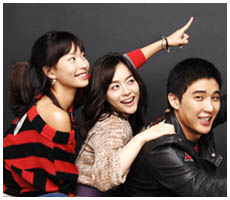 Uhm Gisuk, a boxer, finds out that he has a heart disease which is, in effect, telling him how he will reach the end or at least that he must invest a whole lot of money into his hope for recovery. Eventually Gisuk decides to give up boxing. He gets into a situation where he has to make a go of a new career for his family who don’t make a great living off their Laundromat. And for his sister, who, despite the fact that she is 30, her family can’t dare try to help her marry because she was prematurely born.

The only reason why he even started boxing was to make money because it his only change without a good education. Because that would be the only way he could build the finances necessary to set up a little restaurant for his sister. He would have done anything, and not only boxing, to reach this goal. Defending himself that way he quits boxing and is about to start a new life when love flows into him like an ambush.

Nah Kyung Joo lives with her mom and two younger siblings; they all work here and there to help her mother keep house. Her dream is to become a home shopping host. Her mom works as an insurance broker but her income is not sufficient and Kyung Joo isn’t much help either because she spends all her earnings buying clothes and whenever she has time she’s busy window shopping for designer brands to buy once she’s saved enough money to buy it. She thinks that doing these kinds of things is an investment for the knight in shining armor she’ll one day meet. Her little sister, an outstanding student, does not understand Kyung Joo’s actions and kind of looks down on her but she does not care. This somewhat snobbish and vain character falls in love with Gisuk. They meet in a subway station, Gisuk helps Kyung Joo catch a pickpocket who was trying to steal her wallet but gets completely exhausted and faints. So Kyung Joo takes him to the hospital but when the nurse asks her to go and pay the fee she just leaves there and runs away because all she has is a overcharged credit and no cash. Just then Gisuk wakes up only to hear this news. The next day Kyung Joo goes to the show host interview but gets rejected.

That night she feels very sad and decides to go to a little covered cart bar to have a drink, just then Gisuk walks in to clear his thoughts about how he’s going to tell his parents about his illness and what to do with his future that does not include boxing. The two meet again. Could this be fate? They sit together but Kyung Joo seems a little nervous and scared so Gisuk thanks her for taking him to the hospital. Kyung Joo is a little surprised because she thought that he would be angry at her for just leaving him at the hospital when he helped her, a little fire of love starts to sparks in her heart and immediately begins to grow.

Gisuk is not the knight in shining armor Kyung Joo has been waiting for all this time but the reason she fell in love with him is because of his faithfulness, purity and will to fight the world. But there love isn’t always good some hardships start to occur with the appearance of a couple other characters, Min Yujin and Hwang June Hyuk. First Min Yujin, ever since her late teens she has been a prostitute and into her thirties. She is about to get married when her fiance finds out about her past and does not show up at the wedding. She gets into the car that they were supposed to ride in together to their honeymoon as husband and wife. She goes alone to her little sister’s grave. Her sister was the only family she had left after her parents had passed away and, at the same time, a burden. She was the reason Yujin became a prostitute, to make money to pay for her sick sister; bills. Eventually she died before the age of twenty. Just then Gisuk was visiting his mother’s grave to tell her about his sickness and his plans. He was on his way back home when at the entrance he sees a car skid to stop and dangles on a cliff just waiting to fall and helps. A woman wearing a wedding dress just looks into the sky like nothing has happened and instead of thanking him for saving her life asks for a cigarette. Time passes and Gisuk meets her again but this time as her driver. This woman is Yujin. Meanwhile, Kyung Joo gets a decent job at a hotel, after moving from several other part-time jobs (actually she gets the job due to the help of her mother’s old friend who is the owner), there she meets Hwang June Hyuk, a guest staying in their hotel suite…