The Woman in the Septic Tank 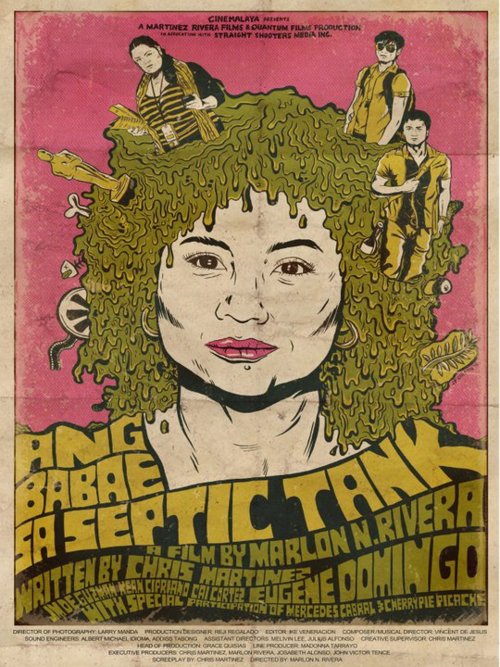 Ang Babae sa Septic Tank chronicles a day in the life of three ambitious, passionate but misguided filmmakers as they set out to do a quick pre-prod at Starbucks, a courtesy call to their lead actress, Eugene Domingo, and an ocular inspection of their film’s major location, the Payatas dumpsite. Director Rainier, Producer Bingbong and Production Assistant Jocelyn are well-to-do, well-educated film school graduates who are dead set on making an Oscar worthy film. They believe they have a winning script, the energy and the drive to make their dreams come true. Like most filmmakers they know, they have devised a screenplay that will show the real essence of our culture: poverty. In the course of one day, they brainstorm and exhaust all possible treatment of their project: the story of Mila (Eugene Domingo), a mother from the slums, who out of desperation to survive, has sold her child to a pedophile. As they discuss the possible executions of the story, the movie-within-a-movie gets reborn in Jocelyn’s imagination several times. As a gritty no frills neo-realist film, as a glossy musical, as an over-the-top melodrama and as a docu drama using non-actors. For their last task of the day, they visit the dumpsite for the first time. As filmmakers gunning for authenticity, they get excited with the ”beauty” of the squalor around them. Soon enough, they are faced with reality as they come face to face with the real effects of their chosen subject. Babae sa Septic Tank is a comedy about misguided ambitions, the art of making art and the romanticization of poverty.-- cinemalaya.org