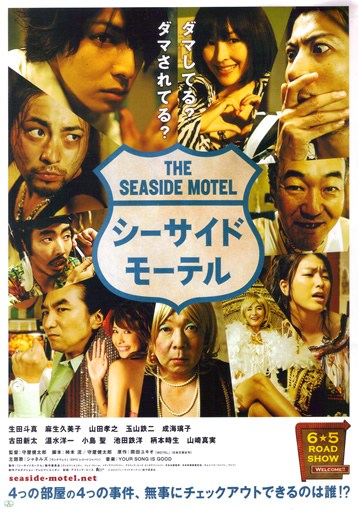 "Seaside Motel" is a romantic-comedy that takes place over the course of one evening at the oddly named Seaside Motel. The motel is in fact surrounded by mountains with no water in sight. One evening smooth talking swindler Kamedara (Toma Ikuta) stops in for the night at the Seaside Motel. During the evening he comes across a call girl named Candy (Kumiko Aso) whom he falls in love with ...

Mădălina Simonis Oct 15 2017 10:08 am For me, this movie is meant to prove we live in a world of appearances and preconceived ideas and it does so from its very beginning. It starts with a sound that I, personally, took it for the sound of an alarm clock, which in a moment proves to be a phone call actually. They let us see a table phone, which made me think that was the source of the phone call sound, but no, it was a mobile phone (the first character's mobile). Then we see the clock. It's 6. The "pm" near the hour is so small that you can hardly notice it unless your ability to notice details is really keen. I sincerely wonder how many of you noticed it was 6 p.m., not a.m., and how many associated the clock with the fact that the character was sleeping at that very time and were convinced it was 6 a.m. Here comes a first revealing of our (mine and others', if any) preconceived ideas: is it impossible for one to be sleeping at 6 p.m.? If someone is sleeping at 6, which law in this world may state that it should be in the morning at all costs? :)

Then a whole series of fake things and preconceived ideas will follow: fake destination (the so-called Seaside Motel is nowhere near at the seaside and is surrounded by mountains); fake love (the prostitute), fake body cream, fake devotion (the shop owner's wife), fake name (the cabaret girl Taeko Suzuki that calls herself Marine Chan), fake gender (the shop owner disguised as a woman), fake assassin, fake label ("I'm Aida of smiley faces", the Yakuza man explains, a smile on his face, when he comes to beat and torture his debtor). Finally, we even have the idea of fake cat: Doraemon. Ryu, the gambler's girlfriend, yearns for watching the Cat Parade in Belgium, but he promises to take her to Doraemon Parade; as Doraemon is not a real cat, we may very well take it for a symbol of not-real-love; fake love again. More than that, the yakuza man who takes care of her in the end will also suggest taking her to the same Doraemon parade. In conclusion, real love is hard or even impossible to find.

However, there is a gleam of hope that "sometimes what is fake may become genuine". First we have the woman who is fully satisfied with that fake cream. But what really proves to be genuine is the call girl's love for the young man who sells the cream. She became what she is because she "absolutely loves sex" while "it's so cliche to think that all call girls come from unfortunate backgrounds" (I quote from the subtitles of the movie). Still, she falls in love with the young salesman. What follows, however, casts a shadow of ill luck upon the image of pure love is the end, when she comes back to the hotel room and finds him no more: as he didn't know about her car accident, when she failed to show up as she'd promised he thought she'd been lying to him and left; when she finally comes and finds the room empty, she appears to think he had been lying when promising to be waiting for her. This is how an unfortunate event can overthrow situations, kill people's hopes and break relations forever. Appearances work at all levels, as it seems. This last idea is related to the picture hanging on the wall of each and every room of the motel. What I understood was that the picture represented each and every individual's dream: it could be anything that the viewer strives for. Love in the first place. In fact, this picture is another proof of us being overwhelmed by appearances: looking at it, anyone would believe they're watching a happy couple by the sea whereas the end of the movie reveals the truth.

I realise I haven't said a single word of the two funny, unfortunate policemen and the dog that roams the area. To be sincere, I have to work upon my ability to analyse a situation. Beyond making the action more vivid and hilarious, there should be more reasons why they are there. The two policemen are practically some other two examples of the fact that not everything is what it appears to be. Though their job is to apply the law and do justice, they are just like ordinary people who have temptations. The moment we see their hurt, bandaged hands as a result of being bitten by police dogs while trying to steal money is really enjoyable.

In the end I must say I'm kind of disappointed this movie, which I consider a masterpiece, did not get more international prizes. If you ask me, it should have got a Palme dOr, a Golden Bear or a Golden Lion. Many people may not agree with me, but this is what I feel. Tastes will be tastes. I strongly recommend it to anyone who thinks they have a sense of humor and drama at the same time. :)

jenniquack Apr 24 2010 7:34 am OMG!!!OMGOMGOMGOMGOMG i am so watching this!!! stellar cast (to me anyways) especially my now fave OTP ---- takayuki yamada and tetsuji yamayama !! ♥♥♥ i worship the genius who put them together in this movie!!!! may god bless you!! and shoving in toma/kumiko was not a bad move either ^^

brenda Nov 01 2009 3:32 pm omg Toma Ikuta and Kumiko Aso are staring in a drama together whoo and even narumi riko is going to be in it my dream came true :)