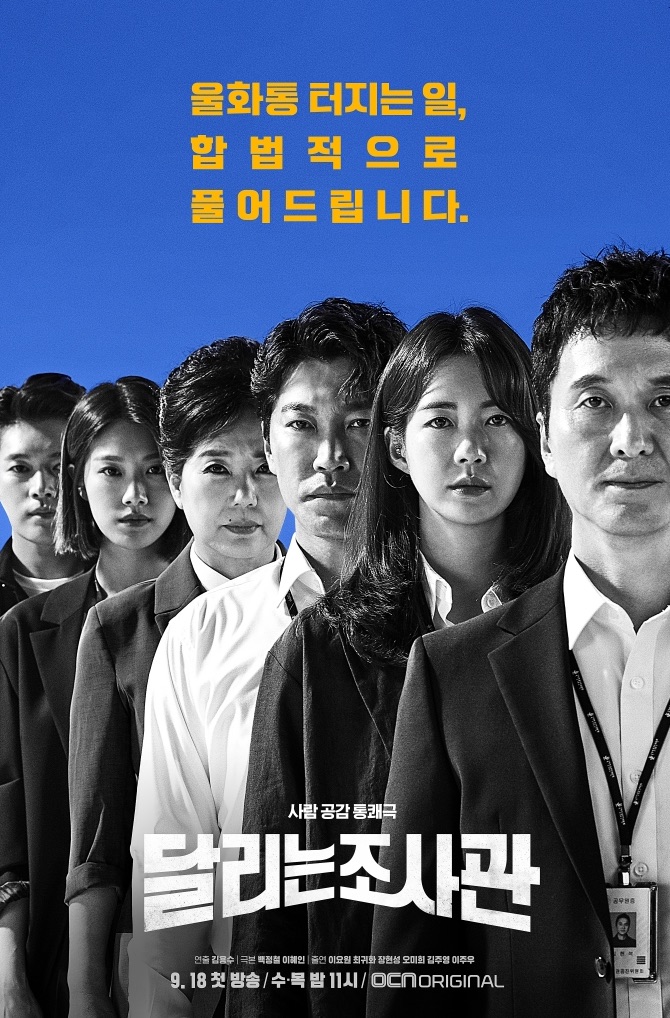 "The Defender: Human Rights" follows investigators for the Human Rights Promotion Commission. They fight for those whose human rights are violated.

Han Yoon-Seo (Lee Yo-Won) works as an investigator for the Human Rights Promotion Commission. She investigates cases based only on the only facts, while trying to stay impartial throughout the investigation. Because of this, she is often mistakenly thought to lack empathy. Han Yoon-Seo also carries a secret and an emotional scar from her past that she cannot tell anyone.

Bae Hong-Tae (Choi Gwi-Hwa) is a former prosecutor. He was dispatched to the Human Rights Promotion Commission and began to work as an investigator for that organization. He is righteous and tends to act before thinking things through.

Han Yoon-Seo and Bae Hong-Tae have conflicts on everything, but they work together for the people who need their help.

Jo Feb 25 2020 11:05 pm The reason for the low rating is the bad lead actress who drains the life out of this drama. She has the same empty, pouting facial expression throughout the whole drama, and does not incite any feelings in the viewer. I don't normally watch her shows. I tolerated this drama because of Choi Gwi-Hwa who is a very good actor, and all the other actors who made this drama come alive with their better acting.

Diannyakakak Nov 12 2019 7:44 pm Just finish the drama. Love how the story was different from other drama. Gonna miss all the cast in it . I wish a little romance would happen in the ending between our lead couple. But its a good show even without it :)

ranny francisco Jun 28 2019 6:42 pm LYw, my favorite actress. I super love her performance in many dramas, the most that I like being Surgeon Bong, Cruel Love, 49 days, Queen Seon Dock, Empire of Gold, Avengers and the latest Different Dreams. The other 2 dramas, Night Light ànd Horrible Boss I kind of miss something in her craft. This drama looks exciting and am looking forward to how she would fare as an investigator.

LKB Jun 26 2019 1:46 am Even though Lee Yo Won has been typecast because she is able to show immense restraint and act with her eyes (in some roles showing immense strain, fear, etc with her eyes only, in others like Different Dreams keeping her eyes stable which I can say with total certainty is much harder than what most expect which is a kind of average, emotionally exaggerated showcase like a grade school talent show or high school rendition of Shakespeare)... I know she is awesome for the kind of role. I just wish more actresses would up their games and not make her, Lee Bo Young, and maybe 2 others handle all the roles like this... people thinking lawyers or doctors losing their cool every day during their job duties is just weird! (I guess shows like House MD which isn't without merit but also shouldn't be the norm made it seem normal to have mentally unfit people with malpractice suits piling up left and right be key figures in more than a mental ward!) Anyway, I really hope someone, anyone, will let her bring out her charm the way Avengers Social Club did and how Different Dreams is doing much more delicately! Plenty of shows exist for an easy cheap laugh or cry, but really fierce talent and great scripts build it up slowly and make the dam burst before you realize it was nearing its tipping point for two weeks! I hope this "hidden scar" of hers is a really special different one. I won't lie. I am not a fan of the leading male. Even though in real life he is a kind of gullible schmuck of a gentle sweetheart, ugh, it is unpleasant to watch him after so so many roles of his totally bringing me to rage levels in those cheap anger ways... So many scripts turn him into a monster that others make him really uncomfortable ... He just looks cranky and mean and greedy even when his character has much more going on or even when it is someone totally good like this seems to be! At least w/Jang Hyun Sung the roles are pretty even with more overall good and the good really good enough of the time to still have warm feelings most often! Not quite so w/Choi Gwi Hwa; I like him more in shows/movies with vampires and total bad boys and druggies and such. Righteous human rights...oof, tough reset. This brain of a hard drive has a lot of corrupt files that are hard to debug (contradiction alert: he is hilarious on variety shows, though, like an actual different person...maybe stop dressing him so dramatically LOL?)

Oh Mi Hee has also been such a hideous greedy monster so often I kinda don't like seeing her on screen til I settle into the role! She needs to seriously transform considering the hell she put me through successfully making me want to destroy her character then daring with someone else's bad bad script to try doing the pity and understanding BS in the last 5% of the show! She picks a wide variety of shows, good bad and deplorable, roles likewise. No clue for this but I hope they can let Yo Wan shine and show fragility and compassion albeit restrained ie approaching cases coolly which usually = doing it well. I really want her to soften through the clients and have her sense of humor revealed! They keep putting her in roles that start far too stoic/cold/stone-faced when she has this 'Lee Young Ae circa Dae Jang Geum' adorable chipmunk looking small-mouthed cute-shy looking grin that totally crushes me! :P