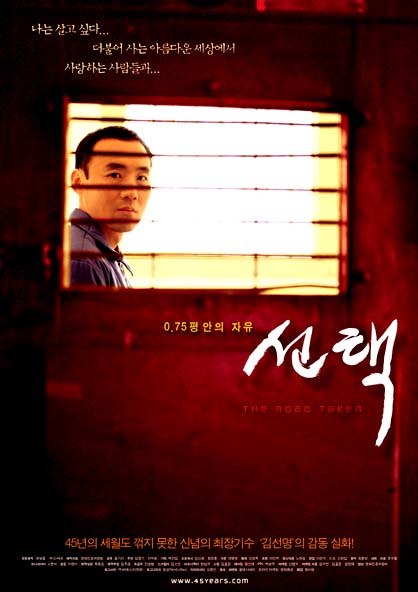 In 1953, South Korean Kim Sun-myung was sentenced to life imprisonment for defecting to the North and embracing communist beliefs. Refusing to repent and recant his ideals, Kim would ultimately serve more than 42 years in prison, longer than any other political prisoner in South Korea’s history. This true story has been adapted by director Hong Gi-seon, a filmmaker with a continued interest in social and political issues. The Road Taken is a stirring saga of personal conviction that gains much of its power from a simple and straightforward approach -—even those with a limited knowledge of Korea’s troubled history will find themselves moved by the story of human endurance. Kim (portrayed by Kim Jung-gi) has resigned himself to a life spent in incarceration, and over the years, he and his fellow political prisoners live only for the dream of a unified Korea, united by the socialist beliefs of the North. But over time, the resolve of Kim’s cellmates crumble, as they are cajoled into writing letters of conversion that allow them their freedom. But despite the cruel efforts of the prison’s warden, Kim refuses to surrender his beliefs. Along with Double Agent (also in the festival), Road Taken offers a refreshingly sympathetic examination of North Korean political attitudes, and the real Kim appears in affecting footage that comprises the film’s climax. -- Travis Crawford/Philadelphia Film Festival