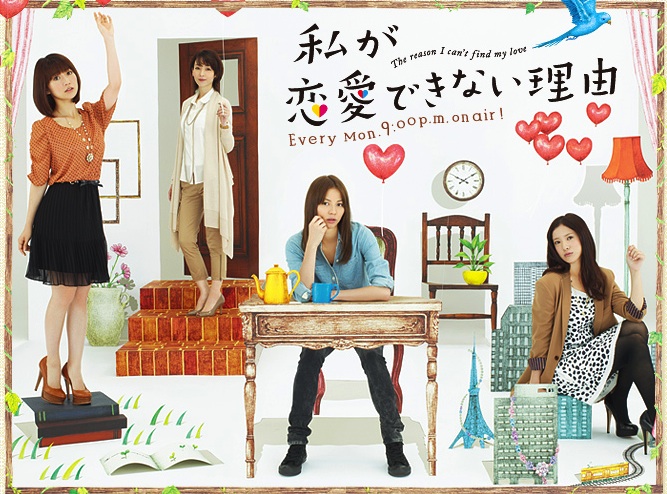 "The Reason I Can't Find My Love" follows the lives of three women who have difficulties in dating and finding love. They all went to the same high-school and now begin to live under the same roof by chance ...

27-year-old Emi Fujii (Karina) is a career woman who has yet to get over her ex-boyfriend. She works at an event lighting company. She is the only woman at her company. Her boss Junichi Tamura (Masanobu Katsumura) treats her like a man, but Emi doesn't care. She is actually more comfortable around men. Takumi Shiraishi(Masato Hagiwara) is the president of the company and his wife Misuzu Shiraishi (Izumi Inamori) works as a planner for an events company. She is an important client for Emi's company.

24 year old Saki Ogura (Yuriko Yoshitaka) graduated from the same high school with Emi and they were in the same theater group. Saki has difficulties in finding a job and lies to her mom and sister that she works at a big publishing company. Her mother and younger runs a dry cleaner. Saki intentionally flunked out of school and took a part time job at a hostess club. She used the money to pay for her tuition fees and sent some of her earnings to her family. Saki is popular with guys, because she is bright and smart. Yet, Saki has never been in love.

Emi and Saki then meet at their school's theater group reunion. They decide to room together to save money and avoid loneliness. Saki suggests they find one more roommate, because when they argue they can have a peacemaker. They then recruit 22-year-old Mako Hanzawa (Yuko Oshima), who was graduated from the same high school, as their new roommate. Mako was raised in a wealthy family and is a sincere person. She is currently a temporary employee. She holds an unrequited love for Shunya Kizaki (Ryu Nakamura) who works at the same company.

Before moving in the new roommates makes three rules - if they bring a man over or if they touch their savings or if they find a boyfriend, then their living arrangement will end. Soon, Emi's ex-boyfriend Yu Hasegawa (Kei Tanaka) comes back to Japan from America ...

Shiraiishi Dec 09 2016 9:02 am hahaha don't u guys realize that Tanaka Kei and Karina acted as lovers in a movie Love Come in 2010 then in this drama, Tanaka Kei acted as Karina's ex-boyfriend in 2011~ lol

frank Sep 03 2013 2:57 pm One of the best shows I've ever seen .... the whole cast is just great..... just happened to come across this great series on one of the UHF channels...Japan ROCKS!!! Our U.S. T.V. writers should ck out some of the Japanese T.V. shows, then maybe they could come up with some decent shows to put on the air here!!

Edil Abdi Omar Dec 10 2011 3:30 pm I love this drama :) especially the sound track; Namie Amuro - Love Story && of course the theme song, Sit! Stay! Wait! Down ! also by Namie xD This drama is worth watching, I just started it for fun and found myself waiting for the eps to update

Ai Nov 17 2011 10:36 am This is a very lovely story about love, friendship and life. The meaning is so deep. Really interesting!

MJ Oct 26 2011 10:44 am Actress Karina is a beautiful lady. Karina as Fujii Emi enjoy her character in this drama. Fujii Emi is my favorite character, and she reminds me of me.