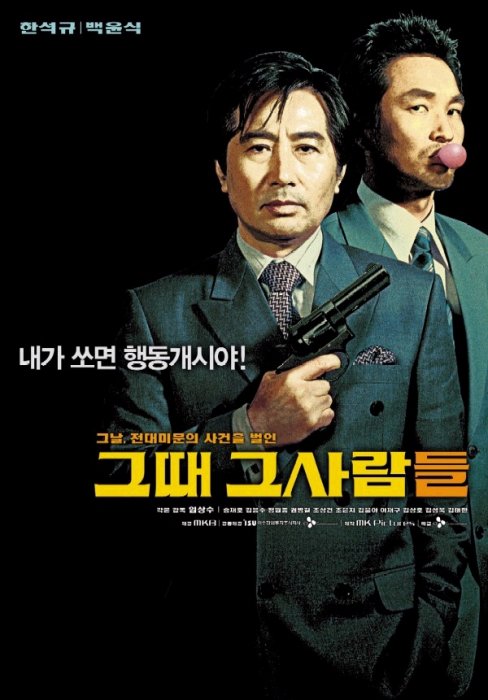 South Korean President Park Chunghee came to power via military coup in 1961 and ruled for 18 years with near dictatorial powers. In October, 1979, students and civilians called for democracy and protested Park’s oppressive rule, but Park’s military easily crushed the protesters.

On October 26, 1979, the day will go down in South Korean history as the President’s Last Bang. While the President, his chief bodyguard and Chief Secretary have dinner with two female escorts, the director of the Korean Central Intelligence Agency will attempt to assassinate the President. Director Kim of the KCIA, along with his two tops aides will now try to change history by ending the life of this charismatic political leader. 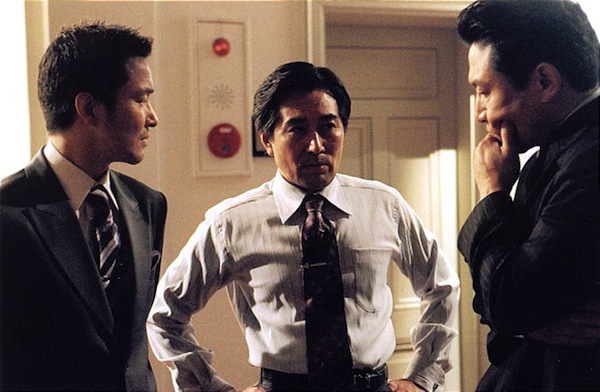 gasenadi Jan 29 2017 6:52 pm Can't beat Ki's exceptional review below. As for me, I have rarely guffawed in a political assassination movie as I did during parts of The President's Last Bang. Now to read up on that history!

gasenadi Jan 28 2017 5:05 am HOLY SMOKE! Just reading the scandal surrounding the film itself makes me want to see it. I'll check in after that - and probably finally getting to the PCH biography I've had on hold these last few years...

President Park Chunghee was one of the more controversial figures in Korean history. His reign over South Korea began in 1961, after a (bloodless) military coup. When he ascended to power, the country was at an extremely fragile stage. South Korea was only 8 years removed from the Korean War and featured an economy that was nearly non-existent. At the time when President Park took control of the nation, the country’s per capita income was less than a $100. By the time his reign ended, South Korea’s per capita income increased by a factor of 20 and he has been widely credited for the country’s transformation into an economic powerhouse by shifting the focus of the economy into an export-oriented economy.

Unfortunately, President Park’s 18 year tenure was also renown for his disregard for human rights and near dictatorship like control over the country. One of President Park’s first actions, after taking over the country, was the creation of the KCIA (Korean Central Intelligence Agency). The KCIA was created to prevent another military coup and to suppress all potential enemies domestically and internationally. The KCIA eventually gained near unlimited powers. They could arrest and detain any person on any charge, which resulted in a climate of of extreme fear and repression. The director of the KCIA, Kim Jae-kyu, is the person responsible for the assassination of President Park on October 26, 1979.

Not only did The President’s Last Bang criticize Park’s regime for their disregard of human rights (the film featured an impressive scene with the camera panning across various rooms in the KCIA, interrogating and torturing citizens), but also portrayed President Park as a Japanese sympathizer. The film even showed President Park speaking in Japanese with his Korean aides. If you want to rile up the blood of Korean citizens, just show one of their leaders as a sympathizer to the Japanese! Although it may be fiction that President Park spoke in Japanese with his political allies, he was trained at a military academy in Manchuria when the Japanese occupied China and he eventually normalized relations with the Japanese in 1975. This would probably be the main reasons why the film portrayed President Park as pro-Japanese.

Beyond these criticism of President Park in The Presidents Last Bang, the film also protrayed Park as a womanizer, that indulged heavily in alcohol. It should be noted that, President Park lost his wife in 1974, because of a botched assassination attempt on his life. Soon after the death of his wife, he became more withdrawn and perhaps this event led to this alleged type of behavior. There were also a few brief scenes that showed Park and his aides discussing the role of democracy in South Korean and other countries. They referred to a handful of other politcal leaders, including a President that started out as peanut farmer from rural Georgia. I really can’t say how accurate these comments were, but regardless, it was fascinating to observe the way politicians view themselves against other contemporaries.

As you can see by now, The President’s Last Bang is extremely controversial for its critical view on one of Korea’s most historical figures. Beyond the political aspects of The President’s Last Bang, the film is a gripping tale of an assassination attempt and the dreams of a small group of individuals wanting to change the status quo for the betterment of their country.

The ensemble cast was impressive all throughout. Baek Yun-Shik, who played the the KCIA director responsible for the assassination of the President, stood out the most for his realistic portrayal of a government official fed up with politics and wanting to make a change because of that. Han Suk-Kyu gave perhaps his finest performance ever, as one of Director Kim’s top aides in the assassination attempt. I should also make a note about Eun-ju Ho who played the escort that was with the President during the assassination attempt. As always she was charming, but in every film I have seen her in (Afrika, Who Are You?, My Scary Girl and now the President’s Last Bang) she has always played a prostitute or a variation of one! I’m starting to get the impression that she is typecast?

The President’s Last Bang not only provided a gripping tale of the night of the assassination, but the film featured impressive flowing camera work, that really helped give the viewer a more intimate view on how the assassination occurred. The long pans across the building where the President was having dinner was as appealing aesthetically as it was informative. As much as the movie injected its own political views into the events leading up to the assassination, once the attempt was started, the film actually took on a near neutral/documentary like view on the events afterward.