The Pancake and The Melon 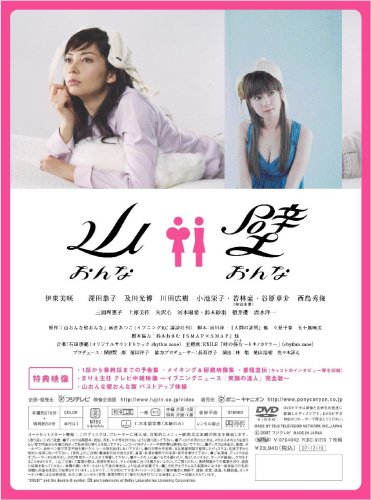 Marukoshi is the oldest department store with 300-year history in Japan. About 100,000 customers visit its main shop everyday where is like a shopping theme park with full of amazing products. And the most popular place in the shop is the 1st floor where you can buy cosmetics, shoes, bags, etc, basically anything women want. Megumi AOYAGI (Misaki ITO) is the chief and the best salesperson at the bag department, and is called the most beautiful woman in the shop. Marie MARIYA (Kyoko FUKADA) is a newly transferred salesperson who has dynamic breasts. When Megumi’s old friend calls her breasts “Wall” and Marie’s “Mountain”, Megumi’s inferior complex starts to haunt her! Based on a popular comic, this comedy follows women who enjoy, is troubled, and sometimes confronts the contemporary life.

Isabelle Aug 05 2014 4:53 am I started watching this drama not sure if it would be work, romance or comedy. It's a bit all three of them, but most of it is actually a comedy. The breast jokes would be a bit too much if it wasn't. The story itself revolves around a "Kabe Onna" (Wall Woman). She's a woman with very small breasts. She's the type who is bothered by it, but won't wear extreme push-up bras to compensate. While breasts are a central theme in the story, it's more about what she goes through with work, her love life, her family, and the people with whom she interacts. The story does lack a focus, and most of the time I was wondering where they were going with it. It felt more like a jumble of short stories with the same characters than a coherent thing. There were some other funny moments though, aside from the breast jokes.

This drama starts out a bit offensively, and I did almost stop watching at the beginning. The new employee at the store has exceptionally big breasts, and the female employees can't help but stare and take notice. Though I have to admit, I have been known to check and compare. I'm sure I'm not alone in that. Though not so blatantly. Then the male staff comes around, and things get really offensive. However, it's a comedy, so this shouldn't be taken seriously. Still, it feels awkward at times. I've been several different sizes in my life. From the regular B to a large C and back to a smaller B cup. Though I have to say that in today's clothing options, having big breasts is certainly a disadvantage. To this day I don't own a shirt, and had to have all the suit jackets adjusted at the back. It often seems like the fashion industry forgets that women's backs are narrower than their fronts. Luckily, I never had to wear a uniform. The "Yama Onna" (Hill Woman) doesn't have that luxury, and part of the comedy comes from her popping button. I didn't find it funny really, but maybe some people do.

I always look for things that I can learn about Japan in a series. It's interesting to watch customer service in this drama. I live in a country where most of the time when you go into a store, the sales people try to avoid you, or watch you like a hawk in case you're trying to steal something. They rarely offer to help you. In the drama they speak about representing the department store, and acting accordingly. Well, here they do a very bad job of that. Maybe the sales people in my country should watch this and learn. Another aspect that I always look for in a drama is what sort of serious question it discusses. This drama often brought up the question of marriage or work. In a way that isn't completely relevant in my culture, since most people keep on working after getting married. It's partly cultural, but also financial, since wages are so low most of the time, and there is so little job security, families need two incomes to get by. However, people generally don't focus so much on their work, and don't put in as many hours as is expected in Japan. I've heard that 12-hour workdays are the norm there, and no wonder people have to choose. It also came up a lot that if a woman works, she can't pay that much attention to her husband. I thought this was a bit archaic, though it could be another cultural difference. In Europe, where I live, marriage is considered more of a partnership, and the husband is generally expected to do his share at home, since they are both working. Therefore, it was hard for me to consider the different mind-set.

The people in this drama mostly work at a department store called Marukoshi. The male characters were all a bit strange. Aside from most of them seemingly being obsessed with staring at the Yama Onna, they were often over the top in their behaviour. I'm sure it was because I haven't watched a lot of Japanese comedy, and that seems to be the norm in these. The three main women in the series I really liked. Aoyagi Megumi (Ito Misaki) is the hard-working Kabe Onna. She's the perfectionist I can relate to. Her job takes centre stage in her life, and she only reluctantly lets men in. She wants to move up in her job, dreaming of becoming a store manager some day, and therefore has an internal struggle between the need to find a mate, and her professional desires. She is quite envious of the Yama Onna, but can't help liking her, in spite of everything. Mariya Marie (Fukada Kyoko) is the Yama Onna. She transfers from another store, and provides the starting point of the drama. The Kabe Onna doesn't seem to like her at first, but her sweet and quirky attitude warms everyone towards her. She is also hard working, but instead of wanting to be a manager, she wants to open her own little shop. She also has a strong connection to food, and her large appetite is a source of some of the jokes. Oyama Haruka (Koike Eiko) is sort of an antagonist for most of the drama, but I warmed to her in the end. She clashes with Aoyagi because she is as driven in her profession as she is, while being a Yama Onna herself. They clash because both are trying to be better than the other. Once she takes herself out of the equation, her demeanour towards Aoyagi changes as well.

Overall, interesting drama. I would have liked the story to have more of a focus. Sometimes the events felt random. A bit like real life, actually, but in a story that's not what can be expected. However, I had a good time watching it, even though some moments were cringe-worthy. It's worth giving a shot to, even though it may not be everyone's cup of tea.