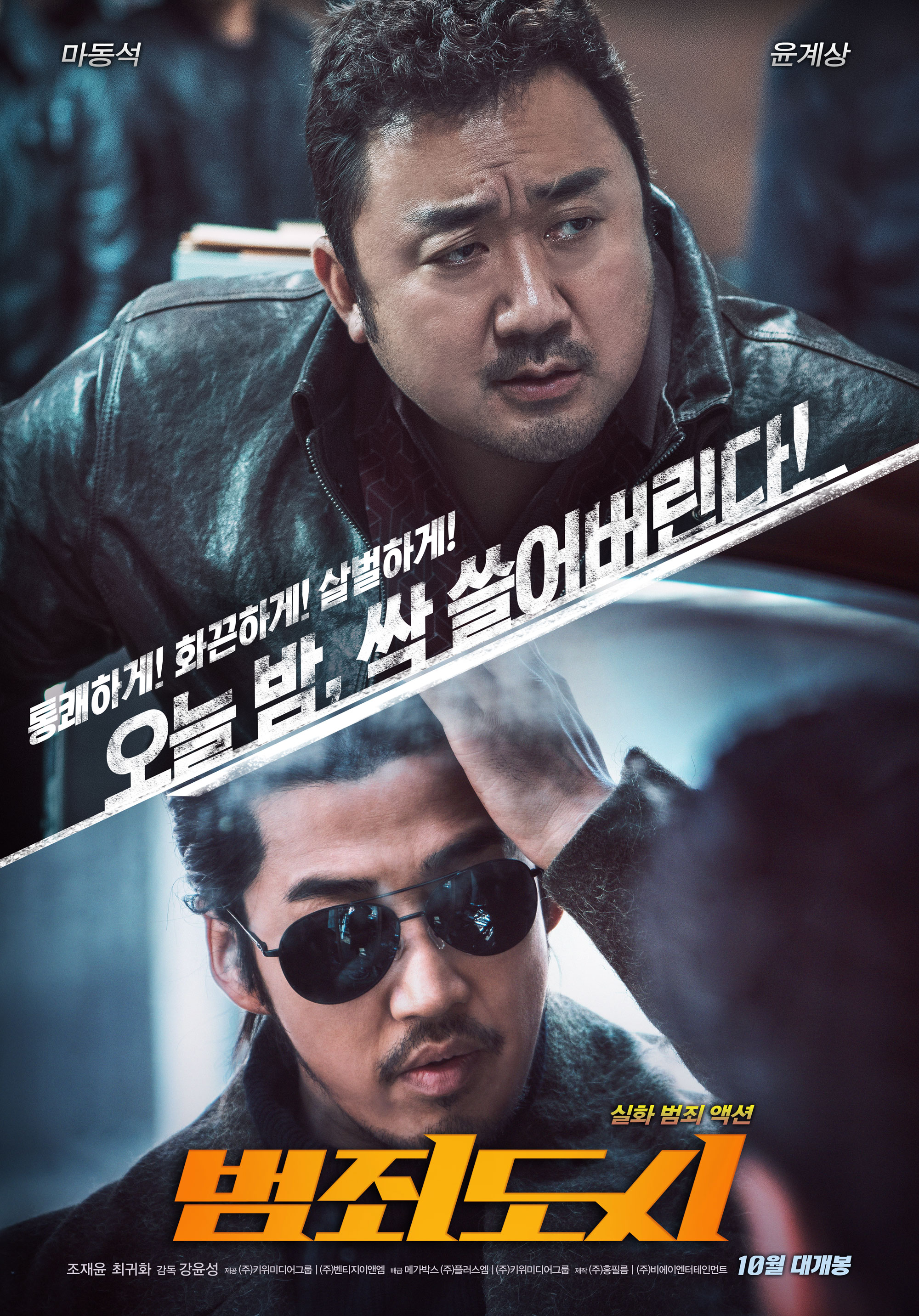 Jang Chen (Yoon Kye-Sang) came from China and now works as a loan shark in a seedy Chinatown area of Seoul. He's backed up by his bloodthirsty henchmen Wei Sung-Rak (Jin Sun-Kyu) and Yang-Tae (Kim Sung-Kyu). Jang Chen is beyond brutal in his methods to collect money. Meanwhile, Ma Suk-Do (Ma Dong-Seok) is a detective in the Chinatown area of Seoul. He tries to keep the peace, while two Chinese-Korean gangs battle over turf in the neighborhood. Jang Chen makes his move to take over.

OnePunceMaDongSeok Nov 13 2022 1:53 pm I watched this to find Mr.Ma power punch but happened to find Yoon Kye Sang is so much cool. Imagine the cop team who already united all gangs in the neighborhood now become useless because of 3 Chinese illegal immigrants. Only 3 men but really fcked up the whole town!! They chopped a gang into pieces, took over the business places of other gangs by force and tactic. Even 2 subordinates of Jang Chen when trapped in the middle of an alley was able to break out. Cops showed themselves so useless and the gangs are just loud but stupid. If Jang Chen wasn't going insane in the end, he could have escaped. Give me more Ma Dong Seok punches!!!

Arslan baig Mar 19 2020 4:10 pm What an awesome Gangster/Crime flick. It has a little bit of everything Good action, humor, suspense, crime elements, decent conflict/tension, emotions, thrills etc; And, it has a scary almost psychopathic villain and a great charismatic protagonist in Ma Dong-Seok. I'm sort of becoming a fan of his work.

Migthy Thor Sep 13 2018 4:24 am I am just so happy to have watched this movie! So marvelously FANTASTIC! I love the story , the fight scenes and the star studded cast! For those who like an action jam packed film, this is it!

Constable Odo Apr 30 2018 7:09 pm Darn good movie. Ma Dong-Seok is a rock as a hard-as-nails detective. Definitely a violent film. I caught this on Amazon Prime Video and I'd say it's a "must see" if you like tough guy movies. I had a choice of various Korean movies and since this was rated rather high, I went for it. Glad I did.

Lucy Apr 30 2018 3:24 am Bloody and violent. I enjoy a mostly male movie. Maybe I get my agression out on screen, so to speak. Well cast, slow at times, fast paced at others, suspenseful. I'll definitely check out the writers' and the director's other works.

maria Feb 21 2018 3:30 am [RECOMMENDED] I wasnt expecting this movie too be so good!! Yoon Kye Sang really did a good job as a handsome villain and Ma Dong Seokk wowowoowow his fighting skills in this really good! The suspense in this movie makes me so nervous n angry at the same tme. Good Job guys!!!

"The Outlaws" oozes out tension and just keeps building it up with a terrific screenplay and charismatic performances by Ma Dong-Seok and Yoon Kye-Sang. The screenplay features not only the duel between cop (Ma dong-Seok) and bad guy (Yoon Kye-Sang), but there's 3 other criminal groups that makes things even crazier and intense.

PatrickStar Oct 12 2017 9:54 am This film beat The Fortress in just one week screening, i've never expected this can be happened. This film "just" starring by top supporting actor Ma Dong-seok (rising main actor) and Yoon Kye-sang who not make a hit film yet, with an underrated Director (new), beating The Fortress with some A-list actors, and big director Hwang Dong-hyuk (Miss Granny). How on the earth this can happened? People say this film was so interesting. So, absolutely this film will be on my list.