The Odd Family: Zombie On Sale 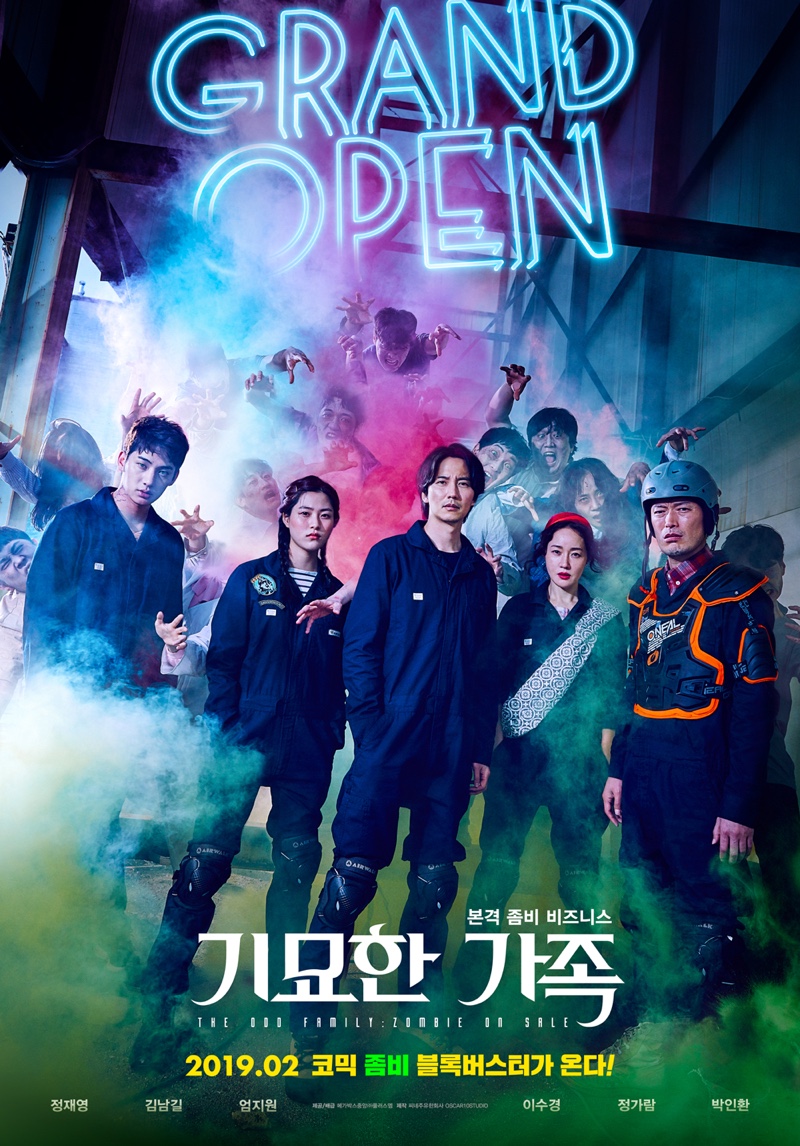 Man-Deok (Park In-Hwan) runs a gas station in a peaceful country village. He has three adult children: Joon-Gul (Jung Jae-Young), Min-Gul (Kim Nam-Gil) and Hae-Gul (Lee Soo-Kyung). Man-Deok only thinks about spending the rest of his life in Hawaii.

One day, a strange man (Jung Ga-Ram) appears in the country village. Due to him, Man-Deok’s family and the entire village is shaken.

Sakura Aug 31 2020 12:13 pm Super cute movie! Wasn’t expecting much, just really wanted to watch a zombie movie lol and so glad I found this! If you want a light and fun zombie movie or any movie at all, don’t hesitate and just click play! You definitely won’t regret it. Everything was perfect from start to finish~!

IM Aug 28 2020 3:08 am A must watch! This zombie-comedy movie is so entertaining and thrilling at the same time. Kudos for the actors! Jung Garam is the ost handsome zombie xp

Ds Aug 19 2020 2:43 am I just done watching this movie and i love this soooooo much !!! Family movie with no romance but heartwarming but have comedy also. I am feeling so good after watching good movie, the last movie i had this feeling is extreme job.

Unnie Jun 09 2020 6:17 am done watching this movie.. this is the most hilarious, unexpected ending and highly recommended zombie movie (next to train to busan).. I never thought Jung Ga-Ram is the most handsome zombie that I have ever watched. the first romance zombie movie that I love was warm bodies and i watched it 3 times or more. then after watching this.. this goes to my top list! I will watch this over and over again!!

Loveli May 09 2020 8:06 pm Extremely amusing zomcom with a dash of romance. KNG proves to be versatile ?

Kara Mar 11 2020 1:30 am This is a must-watch film! This film is amazing! This is a fusion of different genres ahahahah

maria Feb 15 2020 9:19 pm my God why did I watch it now when in fact I already downloaded it months ago ? this movie is so hilarious love the cast and the biting part ??

Jinijine Feb 02 2020 8:39 am This is the zombie film is so funny, i don't expect the ending will be like that this is hilarious, because of this movie, i think i can start watching zombie again, all the cast are amazing

Hunter Jan 12 2020 1:27 am I can't believe I've only watched this now. I know I will watch it over and over again as it is that enjoyable. Excellent story line, actors and scenery. The humour was on point. I hope more people see it as I believe it should be a cult classic.

K Sep 18 2019 8:36 pm This is the only zombie movie that I find satisfying! It's really hilarious and it keeps my eyes focused on the film haha

tess Mar 17 2019 12:30 am Maybe it's because I went in with no expectations (cos the film bombed quite badly in S.Korea), but I found The Odd Family quite a satisfying, witty little film. While it has no pretensions to art or even realism, it is actually very well put together, with rather gorgeous cinematography, and writing and editing that puts across the story and characters very clearly. All the actors do an excellent job - even the ones inclined towards going OTT, like Kim Nam Gil and Jung Jae Young, manage to rein themselves in to present distinctive characters responding plausibly to the situation. As for its genre credentials, I've got to admit it's not at all scary, but I'm not sure why some viewers think it isn't funny. I thought the set-up and the various scenarios were pretty hilarious; more importantly, IMO the laughs kind of emerged organically from the set-up, which I felt was a sign of pretty sophisticated writing. Oh well, different strokes...

WTF!!! Mar 16 2019 3:09 am OMG! The Zombie is so cute. Not even kidding. Jung Garam, hope to see your work more. Quite a few heart fluttering scene. The Train to Busan reference is funny though. Hahaha. This movie is well suited for spring season. Don't worry, its not your cliche zombie movie. Quite a few refreshing scene. At least for me. Its a horror/comedy. Recommend watching.

jon Feb 11 2019 9:09 am First time seeing this and the trailer looks hilarious can't wait for it to come to the states via streaming platforms.

mimsy Jul 13 2018 6:38 am Strange family? More like a strange and wonderful cast combining respected veterans with talented youngsters. (And Kim Nam Gil.) And a first-time director too. Sounds really interesting, but also risky. Good luck everyone and hope this turns out well!

Sannamgil Oct 11 2017 8:12 am Yeay finally KNG reunited with Jung Jae Young and his role model too. I love namgil oppa ??