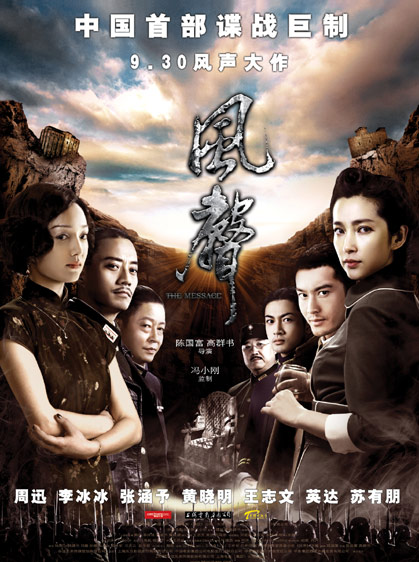 1942, Nanjing (Nanking). Following a series of assassination attempts on officials of the Japanese-controlled puppet government, the Japanese spy chief gathers a group of suspects in a mansion house for questioning. A tense game of "cat and mouse" ensues as the Chinese code-breaker attempts to send out a crucial message while protecting his/her own identity.

Andy Huang Nov 09 2011 11:25 am The Message or the original title: Feng Sheng ('Sound of Wind')' is an excellent movie, one produced under huge budget by the powerhouse Hua Yi Brothers, starring all the leading stars under Hua Yi: Li Bingbing, Zhou Xun, Zhang Hanyu and Huang Xiaoming.

The outcome is simply a killer show, a must to see one! It's so cool that i watch it a couple of times. Highly recommended!

I quote here those lines by John Li from movieexclusive:

"...The two hour movie manages to bring together some credible names to create an authentic look for the movie. Jake Pollock (Yang Yang)’s lush cinematography enhances the intricate costume design by Tim Yip (Red Cliff). The comfortable pacing of the editing, the well executed soundscape and the entrancing production design will mesmerize viewers from beginning to end.

And thankfully, the storytelling does not disappoint too. The gradual build up of the plot culminates in a finale which may be arguably predictable, but works well for a film of this genre. Credit goes to the spot on cast, all of whom shine in their own character. There is Zhang Hanyu (Assembly) as a long suffering militarist, Huang Xiaoming (Sniper) as the Japanese soldier, Alec Su (L-O-V-E) as a lieutenant and Li Bingbing (The Forbidden Kingdom). Zhang and Huang exudes charisma in their pain inflicted roles, Su creates quite a show with his portrayal of an effeminate officer and Li makes viewers feel her agony with a unique aura of quietness. There is nothing to fault with the acting, as it is with Zhou Xun’s (Perhaps Love) code breaker character. Effortlessly moving through the film with her distinctive allure, she is no doubt one of the greatest movie actresses of our time.

There is something about movies which help people like this reviewer to learn more about history. And despite being a fictional thriller, this finely made production has left this reviewer wondering what it was like to live in a time when you lived for your country."

iliekater Feb 07 2010 6:16 pm A very strong scenario with very good interpretations . It is for sure that in the future this film is going to be used as a reference for comperisons .