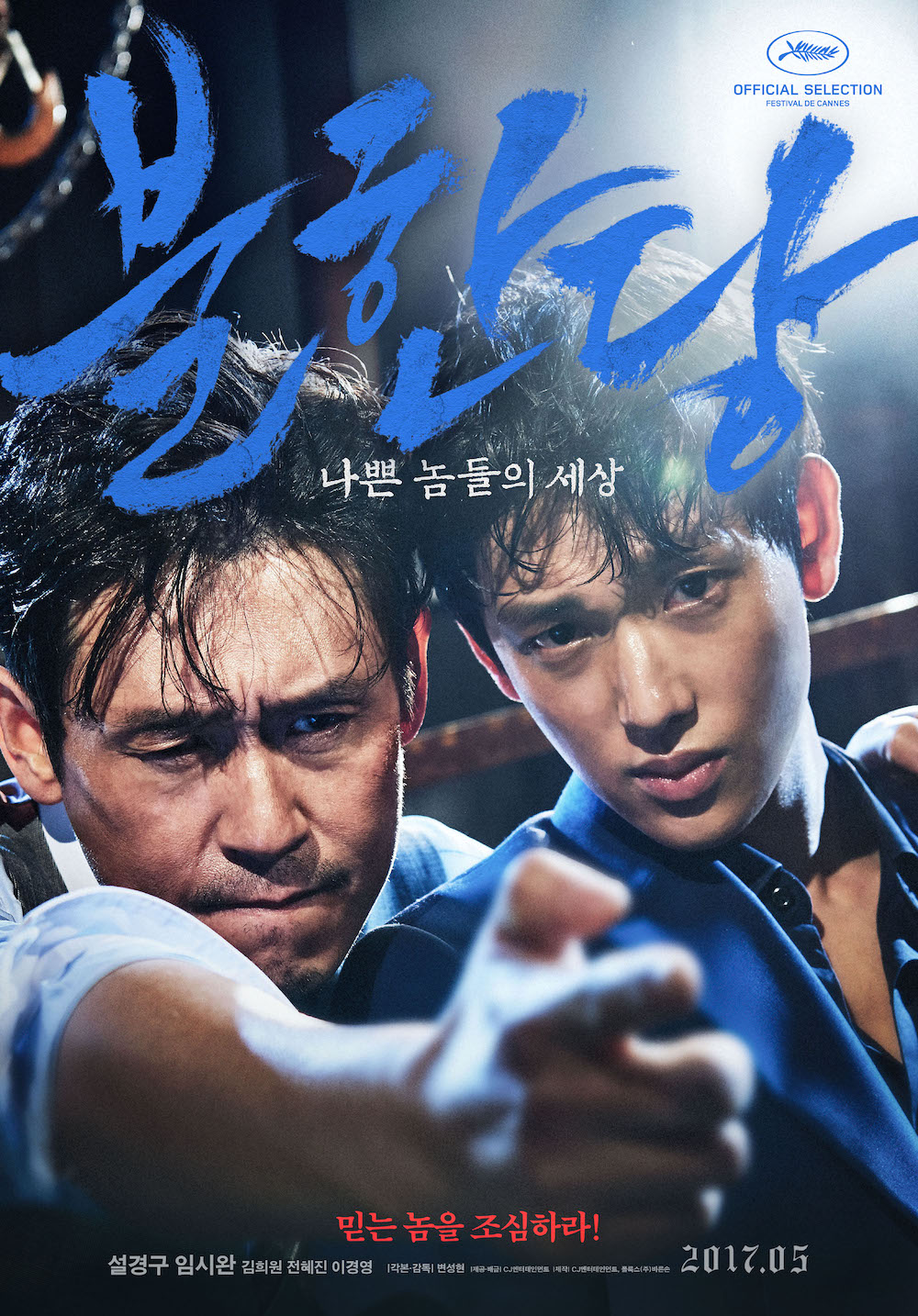 Jae-Ho (Sol Kyung-Gu) is a prisoner. He wields the most power among the inmates and makes rules for the inmates. Jae-Ho is also the #2 guy in a criminal gang outside of prison. He is ambitious enough to go after the #1 spot upon his release.

One day, Jae-Ho meets new prisoner Hyun-Soo (Im Si-Wan). Hyun-Soo doesn't follow the rules of the prison and he doesn't submit to anyone.

Great movie.All emotions are shown & delivered perfectly. Its worth to watch....love it. Cant wait for another tandem.

mmm Apr 01 2021 6:58 am Really perfect.. Their relationship is so unique. Nice, tough, sadly, funny, meaningfull, meaningless.. For me its a totally hyungromance.. Plot is awesome. Cast too. Please watch.

gummies Dec 29 2020 8:59 am I originally wanted to watch this movie because I wanted to see Im Siwan's acting. But after watch it, I think this movie is a masterpiece! The movie is very well written and the selection of players can bring the characters to life. I like the plot which is not easy to predict. The ending of this movie is very deep. They close the movie with feeling the main character's dilemma. I think that's where the story is all about. Never trust anyone. I highly recommend this movie, you need to watch it!

Ha Oct 11 2019 10:30 am Lol this movie wasn't underrated at all. It was really popular in korea atm and even got a chance to be in Cannes film festival.

The actors were perfect, they all fit the roles, especially the 2 main leads. It's so ridiculous to find such comment said one of the actors didn't fit the role and just suggested another actors, like, why're you like this dude

Anw, I got chills watching this movie! The chemistry between two main leads was the main content and it was ridiculously great!

Linda Mar 07 2019 2:03 pm Omg this was such a good movie! I liked it even though there were a lot of violence. There were a lot of plot twists and the bond between the main actors were the best part of the whole movie. I don’t even know where to begin when describing the mood of the movie, I got goosebumps at some parts. This movie is extremely underrated! If anyone sees my comment and is thinking about watching the movie, do it!

Mariem May 19 2018 10:05 am this movie portrays trust and betrayal...the plot makes me really shocked with the twist! Actors delivered amazingly!

so Feb 19 2018 9:06 pm i just rewatched this for the 3rd time today and it is definitely one of my fav korean films. the whole movie and plot revolved around the intense and blinding relationship between the 2 main characters so if the chemistry between the 2 lead actors was even the slightest bit lacking it wouldn't have work. but im siwan and sol kyung gu are brilliant actors who did have that chemistry so the whole movie was like a rollercoaster ride of emotions and feels till the end. (as for the relationship between them, i know i'm not the only one who thinks that it is a bit ambiguous and that there was a lot of subtext. i personally believe that this movie was actually a tragic love story between 2 unfortunate men so because of that every scene with the two of them and the ending made me feel even more heartbroken lol)

vmi Aug 24 2017 2:28 am the film is too chillingly beautiful to even comment. kudos to the 2 main actors and the director. smooth

Suns Jun 25 2017 10:45 am just watched it tonight and a bit disappointed. Siwan's acting is ok but it is not quite fit the character. I keep wondering if Lee Joon or Lee Jae Hoon take after this, maybe it gonna be much better?

Alister May 21 2017 2:34 am I want to deny it so badly, but Siwan is just such an amazing actor! I got chills just from watching the trailer, and every movie/show he's been in so far his acting is always over the top 150% Damn him and his beautiful big ears!

Panda Apr 09 2017 2:37 pm no need to wonder how he will do, he already looks badass in the trailer, He used to remind me of Park Bo Geum, in the sense that their characters are always cute,....on the other hand, Park Bo Geum, even when he was playing a creepy psycopath (which he pulled off by the way), people were still going "aaaw" at the same timeXD

aline Feb 02 2017 9:38 am Same here. I also wondering how Siwan pull that kind of character. He has played in many kind character except the badass character like this one. But I believe that he'll do good. He's a good actor though. I'm looking forward for this movie to see him

lukii Aug 29 2016 9:46 am Looks cool.. I love prison based movies. I'd be interesting to see Siwan pulling off this type of character, which is different from his usual kind/innocent character. I'll be looking forward to this movie.