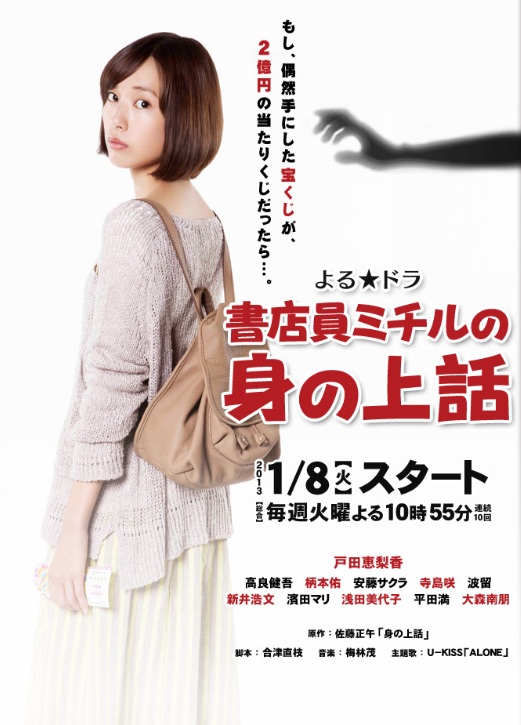 Michiru (Erika Toda) works at a book store in a small city. She has a boyfriend named Kyutaro (Tasuku Emoto), but falls into an affair with publishing company employee Toyomasu (Hirofumi Arai). Toyomasu visits the city from Tokyo. Michiru then plans to go to Tokyo with Toyomasu to eventually settle down there. Right before Michiru leaves for Tokyo, her co-worker asks her to a buy lottery ticket which she does. Later, Michiru finds out the lottery ticket she bought is the winning ticket of a 200 million yen prize. Her world is about to change.

A man who claims to be Michiru's husband tells the story of her personal life. Michiru's long time friend Takei (Kengo Kora) is the only she trust in Tokyo, but Takei has something to hide. Meanwhile, Toyomasu goes missing. Her former boyfriend Kyutaro arrives in Tokyo to find Michiru, but falls into an incident. A murder takes place.

rebecca Apr 13 2013 11:21 am i cannot believe that Michiru can still live after all the tragedies that happenined in her life

zaada Apr 10 2013 12:02 am This Drama was amazing!! One of the best I've seen recently! Usually I watch comedies but it was nice for something different! Shame it wasn't a little longer :(