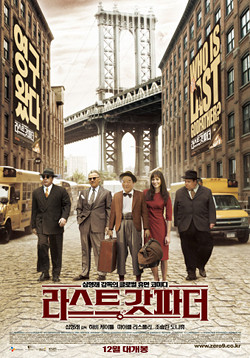 Young-Gu (Shim Hyung-Rae) is goofy looking man and acts like an idiot. He goes to New York to find his father Don Carini (Harvey Keitel), who happens to be the Godfather in the mafia. Young-Gu is then appointed the successor to Don Carini's organization. Young-Gu must now receive lessons in the mafia world.

Tony V (Michael Rispoli), the No. 2 man in the group, believed he would become the successor, but because of Young-Gu he was passed over. Now, Tony V is responsible for Young-Gu's education into the mafia world. Young-Gu does not appear to have any qualities that would make him a gangster. Tony V becomes frustrated by Young-Gu's lack of progress. Young-Gu also gets tired of the lessons.

One day, Young-Gu saves Nancy (Jocelin Donahue), who is the only daughter of rival crime boss Don Bonfante. Nancy and Young-Gu become friends. In order to appease his father, Young-Gu harasses merchants to pay their "tax". Strangely enough, Young-Gu's actions leads to him become a hero of the city.