The Land of Rain Trees 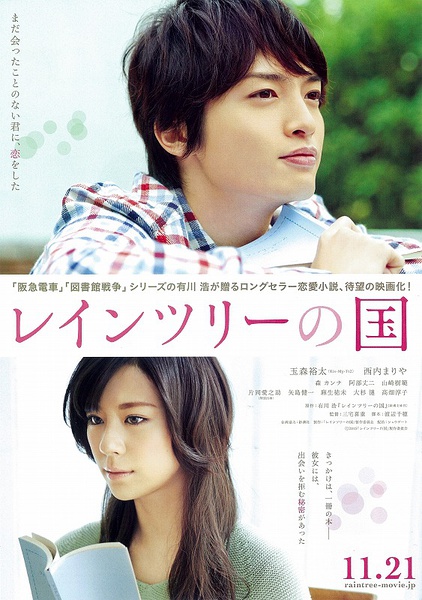 Nobuyuki Sakisaka (Yuta Tamamori) is a salaryman. When he was in middle school student, he read light novel "Fairy Game”. He still has that light novel, because he was so shocked by the ending. One day, Nobuyuki Sakisaka browses the internet and comes across the blog "Rein Tsuri no Kuni.” He learns that the blog writer, Rika Hitomi (Mariya Nishiuchi), also was shocked by the ending in light novel "Fairy Game." Nobuyuki and Rika soon begin to exchange emails. Nobuyuki wants to meet Rika, but she refuses due to her secret.

James Feb 28 2018 5:37 am Terrible film. What was that?? The whole film I admired her beautiful hair and he wants her to cut it!! Was it because he had mommy issues and he wanted her to look like his mom??

He took the gorgeous hair and said cut it and she said yes so she can look like her mother or his mother? Wow that film was weird and so counter emotional

rana Jun 30 2017 7:36 pm I love this movie his attitude is amazing and she'is soooo beautiful but the ending so cloche wahy always with a kiss I wish there was extra ending like her going to work with the now look show her confidence or better let hem peak her up for lunch break and ate in the park she goes to every day i am soooo disappointed

Shiraiishi Dec 09 2016 9:28 am Actually i was expecting Tao-chan and Tanaka Kei acted in this movie cause of their lovely chemistry in Library Wars and their related with the novel abt this movie~ but well Tama-chan and Mariya seems cute together in this movie.

Can someone tell me if there's any website that have eng sub for this?