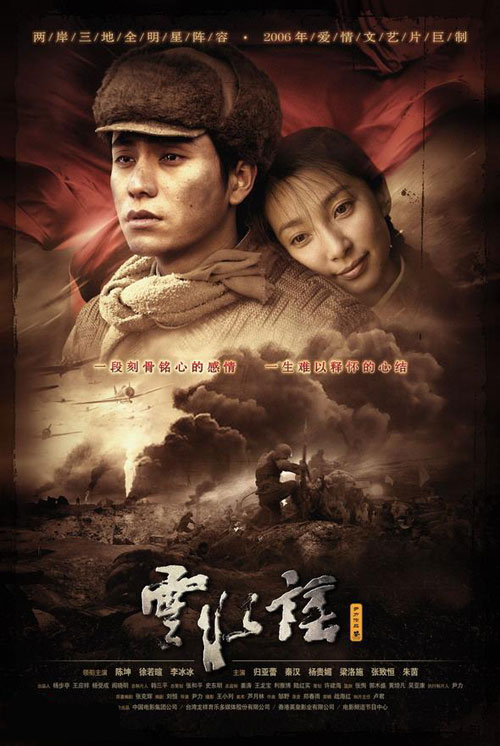 In the beginning... They fell in love. Chen Qiushui was 20. Wang Biyun was 18. When Qiushui fled Taiwan after the 228 Massacre, Biyun gave him a gold engagement ring and they promised to meet again. Qiushui served as an army doctor during the Korean War, where he met Wang Jindi, a nurse from Shanghai who fell in love with him instantly.

And then... Years had gone by, Jindi followed Qiushui to Tibet and was killed in an avalanche. While in Taiwan, Biyun buried Qiushui's mother and continued to pray for his return.

And now... Biyun is living in Los Angeles. Her adopted daughter has traveled to Tibet to retrace Qiushui's footsteps. Through the pictures she sends back via internet, Biyun can see Qiushui's final resting place...

The story of a pair of lovers separated by the Taiwan Strait is a co-production between filmmakers from the mainland, Hong Kong and Taiwan.

crushonyou Sep 18 2015 12:00 pm I watched this movie online and I believe that some scenes were edited or cut short. So I can't really judged how poorly or incoherent the present and flashbacks lay out.

I hate the ending. This movie is probably the first to make me depressed. He got married, and she still waited for him until he died. At the end, it's the woman that suffered the most while the man got to enjoy his life to the fullest. This got to be a production made by males. I didn't feel that bad when he died. What could have made me feel better is for that niece and son of Chen to get together. Like, at least somewhere in their family blood got together... but no, he's married. But then I wouldn't mind if they start an affair. Seriously though it was a perfect situation for the niece.