The Journals of Musan 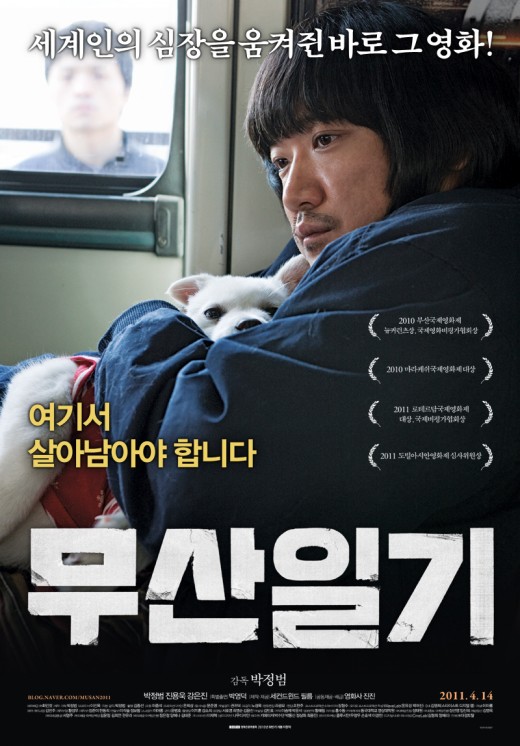 Seung-Chul works for a shady boss plastering posters of sex shops throughout the city. He is frequently short changed on his pay. The sole pleasure Seung-Chul seems to have found in Seoul is a woman named Young-Sook (Kang Eun-Jin ). Young-Sook sings in the choir at the same church Seung-Chul attends, but she doesn't even notice he exists and Seung-Chul doesn't have the fortitude to introduce himself. Nevertheless, in his free time, Seung-Chul follows Young-Sook around town and, one evening, he follows her to a karaoke bar where she apparently works at night.

Seung-Chul then applies for a job at the karaoke bar with Young-Sook's father (who owns the karaoke bar). Seung-Chul will make only 30,000 won a day in his part-time job, but he will get closer to Young-Sook. Days later when Young-Sook notices Seung-Chul at church she suddenly feels a sense of awkwardness. Meanwhile, rival poster layers constantly harass and beat-up Seung-Chul. Seung-Chul's roommate Kyung-Chul, who works as broker sending money between South and North Korean families, also finds himself in trouble after double-crossing clients. Finally, Seung-Chul's only friend in South Korea, a stray white puppy, goes missing ... 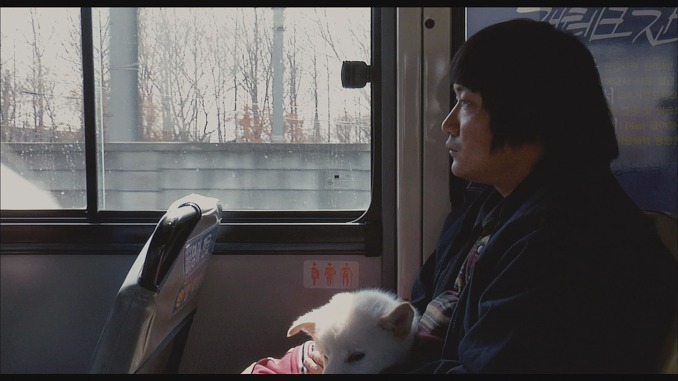 Stone Jul 18 2011 3:40 am "Silver Apricot" was awarded to this movie at the Golden Apricot International Film Festival in Yerevan !

Ki Apr 25 2011 12:00 am Absolutely loved this movie. From above, you can see the movie won a lot of awards at film festivals and deservedly so. The movie visually is pretty non-descript with occasional use of hand held camera in chase scenes. I don't recall much of a soundtrack either. Rather the movie focuses on main character Seung-Chul's attempts to integrate in South Korean society. This part is fascinating, with questions of morality spun around eventually and making you rethink what you thought before. Ambiguity between good and bad is never clear which makes the content all the more thought provoking. Story is well written that leaves the audience in anticipation of what will happen next. Story unfolds with North Korean defector Seung-Chul living in a crappy apartment in a crappy neighborhood on the outskirts of Seoul (perfect metaphor for his social status) with fellow North Korean defector Kyung-Chul. Whereas Kyung-Chul has acclimated himself into capitalistic Seoul - he's a fast talker, with questionable morals and a high drive to make the quick bucks - Seung-Chul is a loner without much to offer to get ahead in society. In fact, he's a lonely man and he resorts to stalking a woman at his church who doesn't know he exist. This part works great and gets more fascinating as the viewer learns the woman also works nights at a seedy karaoke bar owned by her father. When the lady later learns Seung-Chul also attends the same church a display of Korean ethics comes about in a fascinating way. There's also Seung-Chul being hounded by rival kids and the sub-plot of his puppy which has become his sole companion in Korea. Yes that dog is another metaphor. Everything comes together by the end of the runtime and when the end credits roll around you are left thinking by what transpired in front of you. Main actor/director Park Jung-Bum did an absolutely amazing portrayal of the engima known as Seung-Chul. This is a movie I will seek out to watch again in the not too distant future.