The Insects Unlisted in the Encyclopedia 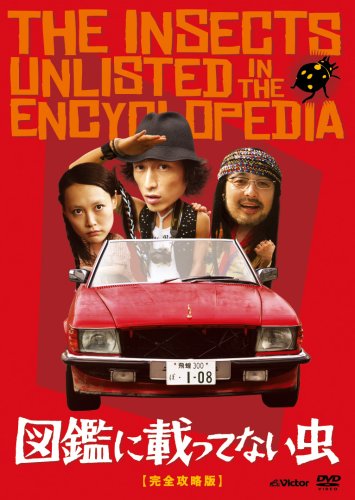 Miki's hero is a scuffling free-lance writer (Iseya) who gets an unusual assignment from the mildly deranged editor (Miki Mizuno) of the appropriately named rag "Kuroi Hon (Black Book)": Have a near-death experience and write a piece about after-life. The writer, after some arm-twisting, sweetened by a hefty cash advance, accepts the assignment.

In his search for a death-trip he can survive, the writer enlists the dubious assistance of Endo (Suzuki), the aforementioned hippie. First, though, they go looking for the writer's photographer buddy, Mashima (Yutaka Matsushige) — and discover that he has vanished from his disaster-zone of a flat.

Soon after, they encounter Sayoko (Kikuchi), a former S.&M. club performer who is contemplating suicide, as well as a pudgy gang boss, who yearns to start a new life, and his scrappy underling (Eri Fuse), who dresses, talks and acts like a guy beamed down from Planet Yakuza.

The writer's investigations lead him and Sayoko to a "near-death show" staged by an eerily grinning hanbun otoko (a man whose lower half has gone missing) and his voluptuous femme fatale assistant.

Though the show is a carny flimflam, the hanbun otoko tells them of a mysterious master (Noboru Mitani) who has the real return ticket to the other world they've been looking for.

The master, they hear, lives on an island full of homeless folk. When the writer, Sayoko and the rest of the gang arrive there, they find the master all right, as well as much else they hadn't bargained on.