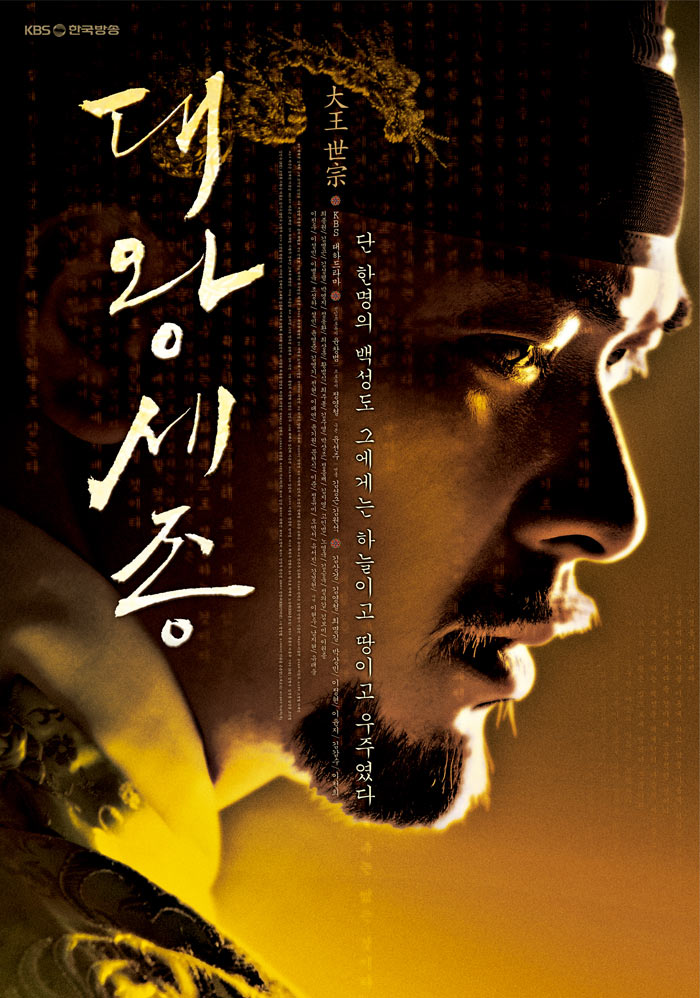 “Sejong the Great “is a full scale politic drama describing how King Sejong and his loyal retainers cooperate and contrive to make his dynasty a better place. While King Sejong was in throne, the Chosun Dynasty enjoyed the most fortunate and happy age ever.

The drama shows the dramatic processes of how so many new cultural heritages have been devised. At that time, “Hangul”, the native phonemic alphabet system for Korean language was first invented and introduced. Before it was made up, Chinese characters had been used for a written communication, which makes it extremely difficult for ordinary people to learn and use. “Hangul” is easy to learn for its simple and scientific principles, so wide-spread people instantly use the alphabet. Other than “hangul” itself, there had been so many cultural heritages created during his regime including a rain gauge, a sundial, an hourglass to name a few.

Also, King Sejong’s pragmatic diplomacy is concentrated in the drama. Then, the Chosun Dynasty was facing a powerful Myoung Empire of China, and King Sejong demonstrates the essence of pragmatism with dignity.

The drama location is a real palace such as Kyungbok Palace, Changduk Palace with touches of King Sejong, so the sceneries will give much more authentic fun to the King Sejong’s historical drama.

Toni Sep 27 2016 12:33 pm Just finished watching this drama. It was good for the most part and a bit difficult to accept how totally King Sejong was the total opposite of his father Taejong. Over and over those who served him went up against him and plotted to destroy his work. Foolishly wanting to hang onto living in the dark ages and subservient to the Ming. Each finally seeing how modest a man he was and so self sacrificing for All his people. At times I got very upset with the King's way of handling things. Being soft on those who were willing to take him off the throne, yet so hard on those who never gave a cause to be punished. The way he treated Jang Youngsil was way too harsh, crippling the poor modest. Wanting to save his life in this story was not enough reason for the torture. In real life the poor scientist was kicked out of the palace and someone else received credit for his invention. Wish they can write these historical stories true to form, factual.

Diane Apr 25 2016 10:34 pm This is a marvelous historical drama gem...well-written, well-acted, well-researched, and just well-done. Thank-you!....and a beautiful soundtrack as well. A worthy tribute to the truly Great King Sejong.

zerah Mar 30 2016 2:51 am congratulations! I learned so much things watching this special drama! thank you! my deep appreciations and respect to all the crew!

Rafael Vancamper Sep 07 2015 12:34 am His continuing education, the goodness of his heart, the love for his family, his high moral principles, his dedication in favor of the common welfare and its great intelligence, took him to be one of the kings most loved by his people.

His well-earned reputation as a good man, were the product of his great wisdom and his high moral principles.

The dedication to help his people, led him to develop inventions and ways to make more worthy the human life.

The history of King Sejong teaches us that the power and authority, do not corrupt you, and that it should rather be used to give a more dignified life to those who are the basis of power......... the people.

His life and his way of ruling are an example to all the kings and for those who govern the world of today.

gt Sep 02 2015 12:28 am This is a must see if you are into Korean historical drama. it shows you why King Sejong is so well loved. Through Jang and the king it also shows how inventions come about. Truly interesting and worth your time watching unless you are only interested in kissing or wars.

Katya Oct 05 2013 8:18 am This is my favorite historical drama and I’m sad it doesn’t get as much attention as other dramas. Though I take some comfort in the fact that quite a few actors got their well-deserved awards. I cared more about every single supporting character in this masterpiece than I did about some leads in other popular tv series. Utterly convincing portrayal by all these great actors accompanied by wonderful soundtrack moved me to tears quite a lot of times (and I'm not the type to get easily upset and cry). And kudos to the script writers and directors. I didn't skip a single scene (and I like doing it quite a lot). The plot is really amazing, all characters are well-written. And this interpretation of King Sejong as the "most exalted and humble person" is a real jewel among plethora of korean dramas.

James Narraga Dec 10 2012 2:48 am please to all korean movie concern please remake the historical movie The Ladies in the Palace...... thank you

Kikz Apr 04 2011 6:30 am I like this show very much. I'd always stay late every SAT and SUN just to watch it. Last weekend, there's no more SAT schedule for show and it is now shown on SUN from 11:40pm to 1:40AM. You know what, I still glued on the sofa waiting for the show to start. It's very fun to watch and there's a lot lesson to learn especially in dealing with our day-to-day life. Highly recommended.