The Girl Who Leapt Through Time (Japanese Drama) 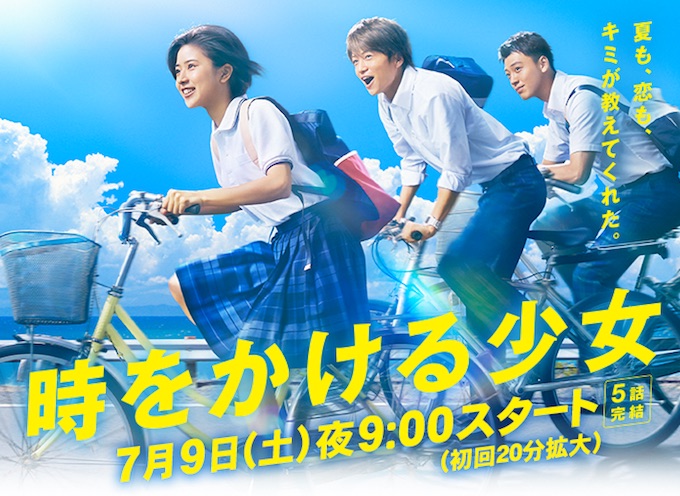 Mihane Yoshiyama (Yuina Kuroshima) is a 3rd grade high school student. She is a member of the photo club at her school. The day before her summer vacation, she smells a lavender scent in the science lab and she suddenly gains the ability to leap through time. Shohei Fukamachi (Fuma Kikuchi) is Mihane’s classmate. He actually came from the year 2122 and is a researcher. Shohei lost a drug that allows him to go back to 2122. In the meantime, Shohei hypnotizes those around him and lives as a high school student.

Mihane and Shohei become to have feelings for each other.

cane Oct 09 2018 12:14 am I don't feel any chemistry between shohei and the main girl. In the anime, shohei is so charming but in this drama, I am on team Goro. He is sincere and cute

Rin Cho Mar 23 2018 8:10 pm I downloaded this version since the anime and the movie became my all time favorite since i was a college student. I'm not sure what the difference it, but I hope it will give justice how beautiful the 2 other versions are. The anime is really good in a sense that it is youthful and hopeful. on the other hand, the movie is wonderfully bittersweet.

Secret Nov 19 2017 5:08 am Lol. That's what i thought as well. Shohei cheated on her since he brainwashed her. I'm all in for Goro and looks to me that mihane was actually supposed to be in-love with goro if it weren't for shohei then goro's confession to mihane should have went well in my opinion. In besides like what the previous guy mentioned, i didn't even pity shohei at the end. He's like a jerk who suddenly grabbed the girl in which your friend like the most! If it were me, i would have had punch that guys face already. XD

Rainy Feb 16 2017 3:10 am I never watch the anime though.. but i really dissapointed with the ending. Hiks.. This is really good drama, but i don't happy at all in mihane-shohei love line.. Goro is much better in any ways to be with mihane.. Moreover, mihane's feeling towards shohei at first was fake, right?

lily Oct 21 2016 9:55 am I give this drama 4/5. Goro is better in every way. Good drama though, but last episode doesn't get me anything. I don't feel sad over Shohei departs and I can't feel what the female lead feels. The only thing I could feel is Goro's heartbreak. Thankfully, he moved on.

coconut man Aug 30 2016 9:39 am shohei manipulated everyone especially mihane... that's totally lame...mihane is "BAKA"...choosing a stranger over her bestfriend...