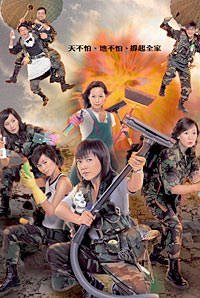 Many people say that housewives are good-for-nothing and will only idle away their time on boring chores. But Mung Ka-Ka (Sheren Tang), Ting Mui-Heung (Cecilia Yip) and Cho Mei-Ngo (Kiki Sheung) will prove them wrong. Contrary to what you might think, being a housewife is as stressful as fighting in the battlefield. The never-ending housework and the persistent family conflicts will put them on the alert at all times.

Ka suspects that her husband Fong Yin-Cho (Michael Tse) is a cross-dresser and her constant worries have caused her to suffer from anxiety disorder. Heung has contracted a sexually transmitted disease from her spouse while Ngo agrees to arrange a sham divorce for the sake of his husband without knowing that he has been cheating on her. The women’s neighbor Ko Wing-Kuen (John Chiang) was widowed in his younger days. Since the death of his wife, he has taken up all kinds of domestic work, which puts him in a very awkward position.

The wife of Kam Shing-Tsun (Kenneth Ma), the owner of a tea restaurant in the neighborhood, has recently committed suicide. Before the tragedy took place, the three housewives had given the lady a warning, about which they feel so guilty…