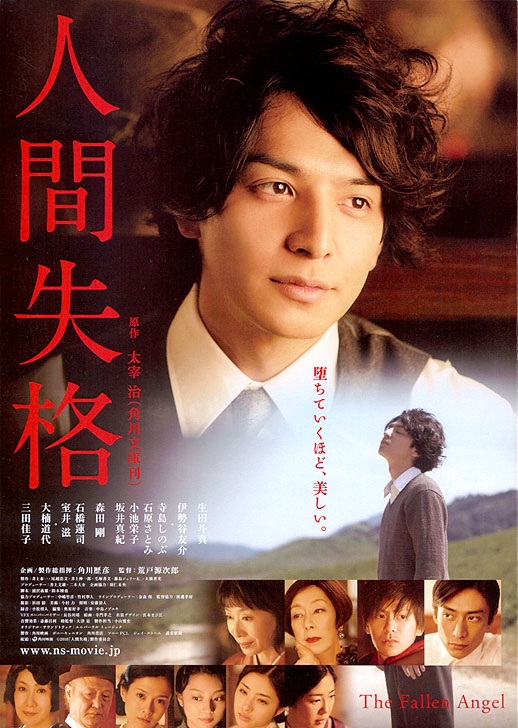 "No Longer Human" tells the story of a young man who has felt since childhood utterly alien from others around him. Since that time he has learned to put on a face to hide his alienation. He feels incapable of belonging to the human society, especially so by society's refusal to take him seriously. He then follows a descent into alcohol, drugs, & suicide ...

Yozo Oba (Toma Ikuta) was born into a wealthy family in Tsugaru. As a child he practiced smiling to hide his true feelings and to get along with others. His classmate Dakeichi found out about Yozo's eccentric behavior and told others about him. But Dakeichi also told Yozo a strange prediction about his life ... that he will become popular with the ladies and draw beautiful pictures.

During Yozo's high school years he moved to Tokyo. In Tokyo he meets Horiki (Yusuke Iseya), a guy six years older than him. Horiki is known for being a player and one day drags Yozo to the Blue Flower Bar run by Madame Ritsuko (Michiyo Ookusu). At the bar there is poet Chuya Nakahara (Go Morita) who proclaims "war is brown like the color of shit". Yozo doesn't say anything as he takes in the environment.

Yozo starts to drink more often and starts to live the fast life like Horiki. Like Dakeichi's prediction, Yozo also becomes popular with the ladies and always has a woman next to him. But, Yozo starts to become sick of this lifestyle.

At a cafe, Yozo meets Hisako (Shinobu Terajima) a women who lets him drink without paying. Yozo senses that Hisako feels a heavy sense of loneliness like himself. One day Yozo and Hisako attempts to kill themselves out in the Sea of Kamakura. Hisako dies, but Yozo survives. His family then takes Yozo to a sanitarium ...

Sunny May 30 2011 10:56 pm Ikuta Toma was brilliant! But some of the scenes made me snort and wonder, "WTF?" (The especially artsy/bizarre scenes -- Nakahara standing in the tunnel, etc.) Not that it wasn't enjoyable. :D

Ada May 24 2011 6:54 am I've watched this too, but I have mixed feelings, Ikuta Toma was brilliant, and the story too, but I think some parts were unfinished. By the way, I love it, it was really touched me, so I will watch it again and again:)

John Aug 29 2010 10:39 am I watched this on the plane home from Tokyo last week. It was a really excellent film. I have read reviews claiming that the role was miscast but I assure you that Ikuta really nails this one.