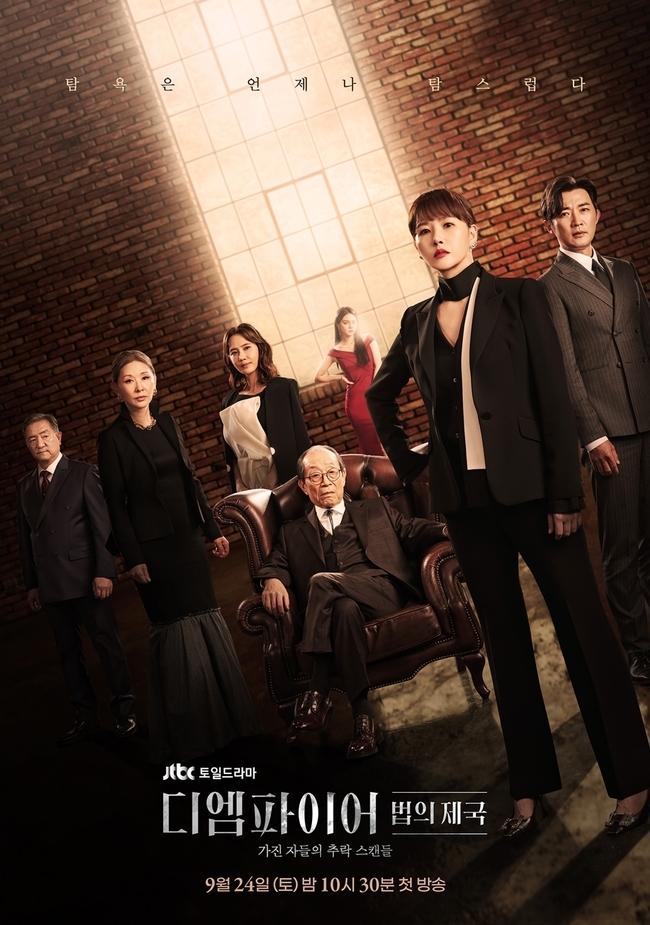 A family has accumulated vast wealth and power through the law. They face ruin because of scandals.

Han Hye-Ryool (Kim Sun-A) and her family come from a law background. She works as the chief of a special investigation team at the Central District Prosecutors’ Office. Her husband Na Geun-Woo (Ahn Jae-Wook) and her mother Ham Gwang-Jeon (Lee Mi-Sook) both work as law school professors. Her father Han Gun-Do (Song Young-Chang) works as a lawyer for the biggest law firm in South Korea.

Han Hye-Ryool carries out her job as a prosecutor in an excellent manner, but people denigrate her work because of her family's prestigious background. She wants to break free from her family ties and satisfy her own desires. Meanwhile, her husband Na Geun-Woo has been mentioned as a possible presidential candidate. He seems to have achieved everything he wants and is a good person, but people don't know who he really is. Han Hye-Ryool's mother Ham Gwang-Jeon and her father Han Gun-Do also use the law as tools to make more money and protect their status.

Hello Sep 27 2022 12:54 am I'm surprised that Lee Mi Sook is playing as Kim Sun Ah's mother here. She looks like KSA's older sister, or sis-in-law.. the fact that they have only 13 or 14 years age gap. Also, I thought she's the manager of the house (ha ha ha) when she's supervising everyone preparing breakfast for the family in episode 1, that's why I was surprised when KSA called her 'Mom'.

Clara Sep 26 2022 3:28 pm @Yay hes not bad but true bae soo bin and lee tae gon OMG those men would have been crazy befitting here. I think their studrnt teacher affair relationship isnt a big deal in terms of how they fell in love, hes a philanderer and shes an opportunist gold digger so its just a hookup relationship which are quite common in real world, there is no love there actually its hidden sex and her getting gifts and help in exchange thats what i gathered.

Yay Sep 26 2022 11:40 am The ML has no charisma or maybe he's not fit for this kind of role.. when I watched the first 2 episodes, I asked myself 'how Hye Ryung and that Nan Hee student fell in love with his character?'

Sorry for his fans here, I know he's a GREAT actor, but I guess Bae Soo Bin is fit for the ML role, or maybe Kim Seung Soo or Lee Tae Gon. ^_^

Confused Sep 26 2022 11:10 am So sorry.. after watching episode 2, I'm still confused about the plot of this drama. I don't understand what they're talking about — investigation about Jusung, Christmas Fund and the de@d people found in Episode 2... I'm confused. The story is mixed up and focuses more on ML's affair with his student.

granged Sep 26 2022 9:40 am ATleast he was caught early so they do not have to over stretch the affair ...they should focus on other aspects

Doee Sep 26 2022 12:28 am Ew the dad cheating with his student. He’s old enough to be her dad or grandpa…kdramas need to stop with this type of plot. It’s too predictable…

Poopoo Sep 25 2022 6:33 pm Does anyone die in that family? Its 4th generation going on. Hate sex and all that affair nonsense why korean dramas dont stop this cheating and poorlybfilmed sex scenes now it started from world of married and now its a millionth drama on this. Having said that i am interested in the central theme of the show and liking the sets too. So i will give it few more episodes actually ep 1 wasnt bad also. If it goes boring then iwill drop but for now law part is done interstingly.

Hey jessie Sep 25 2022 2:54 pm Same plot in every kdraMa…..rich wife, poor husband trying to take over, husband cheating with young mistress…mistress take revenge on wife….husband dont want to divorce wife because he still need her to keep the family together etc…..nothing new here

TDS Sep 25 2022 1:12 pm Got it the drama about money, power, and someone killing people over a Christmas Fund??? Han Hye-Ryool has a trophy husband and does see his infidelity. Private failure???? Just wondering the son is gay?????

Hmmm Sep 24 2022 7:26 pm Why is almost every drama in Korea now about lawyers? The dramas are practically interchangeable.

SunA Aug 25 2022 8:54 am Rooting for Kim Sun A ??? Her most anticipated comeback!❤️❤️ Excited to see what this drama can offer to the viewers.Since Kim Sun A is there, it will definitely exceed my expectations.Can’t wait for the drama to start.??