The Dog of Orthros 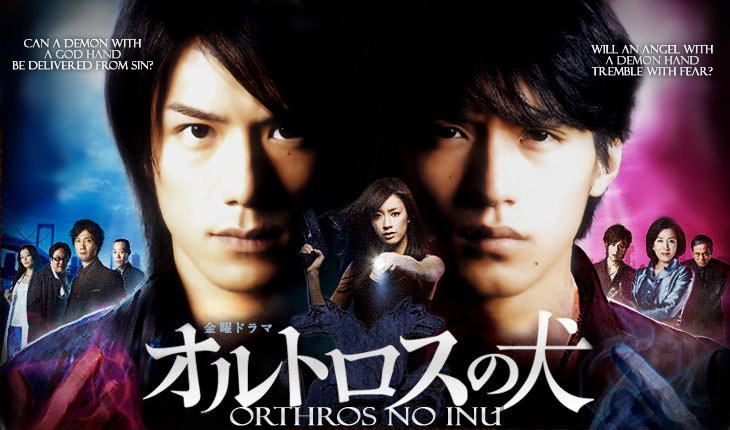 Shinji Ryuzaki (Hideaki Takizawa), who has the "Hand of God," can cure any disease, but is a mysterous figure who never reveals his true feelings. Ryosuke Aoi (Ryo Nishikido), who has the "Hand of the Devil," can kill with the slightest of touch, but has the temperament of an angel. These two diametrically opposed beings will face off in a epic battle.

Detective Nagisa Hasebe (Asami Mizukawa) works at the Minami Nagawa police station in Tokyo, Japan. She investigates a murder case involving a female university student. After pin-pointing a teen named Masaru Kumakiri (Hikaru Yaotome) as the likely culprit, she sneaks into a place to investigate further, but is caught by Masaru and his friends. At the moment she is about to be shot by the gang, she is saved by a stranger who merely touches one of the young men and that young man collapses to his death.

A few days later, a man named Ryosuke Aoi, who works as a high school teacher, comes into the Minami Nagawa police station and confesses to killing a young man. He states to the police that he killed the man by merely using his hand, which is the hand of the devil. The police unable to gather enough evidence lets Ryosuke Aoi walk.

alice Dec 21 2017 10:24 am Interesting concept. Though not without faults it's a interesting, thought-provoking show. I've finished it in a day.

Ryo is without doubt a great actor, but Tackey stole the show this time. Asami's character seems to be underrated sometimes, but I find it interesting how she started first as a police woman with a clear outlook on the world and its morality but slowly started to question it as she's interacting with both Ryuzaki and Aoi.

Tommy Jan 13 2016 8:26 pm Hideaki Takizawa is EXTREMELY handsome in this drama. I thought Kenichi Matsuyama was gorgeous which he is. But Hideaki is beyond beautiful and a great actor the complete package.

lisa Jul 04 2013 9:20 am i didnt even get passed the first episode because of my VERY slow and broken laptop, so i have to wait till it gets back up to speed, so all these coments are making exited and nervous!!! i heard that aoi and ryuzaki are brothers......is that true or just a false saying? i cant wait!!!!

LittleL Mar 22 2012 3:05 am I love this drama, I'm currently re-watching it because I can't seem to find another drama that is as good as this :) Of course I like other drama's too but this one has something special, something that's just a little more... :)

The characters are really well played by their actors and the story is, without a doubt, extremely interesting. It makes you wonder what'll happen or how they'll react to a certain situation. I liked everything from begin till the very last minute of it and I don't know why people whine about it all the time, I liked it. It seemed fitting for the rest of the drama/story so I have no complaints.

If you're doubting to watch this; go watch it now! My only regret is that this drama is just 9 episodes long but besides that everything is great. Watch it and I'm sure you won't regret it :)

sumoni Jan 05 2011 2:11 am I loved this show so much until the end! The plot was pure win and the characters were so cool. It had great action and more romance than I thought it would have. It really makes you think about what you would do if you had the same powers these two had. I did however find the jumps and flashbacks to the village annoying and out of place. I felt they could have explained it somewhat better instead of the interruptions. They didn't explain it all at once, they kept going back to it, trying to make the village seem mysterious, but all I wanted to do was return to the central plot. Also the ending left me very unsatisfied. I don't mind open endings too much, but the way that they ended it I felt was cheesy and over the top. There was too much dramatic talking and it dragged on for so long. Especially at the climax where things were coming together. They writers seemed to just be filling in time. The soundtrack was great too. Wonderful music.

fryn Apr 17 2010 7:29 am absolutely great!!! every episode is exciting and unexpected!!! the more you watched the drama, the more you got hooked til the end!!!