The Cornered Mouse Dreams of Cheese 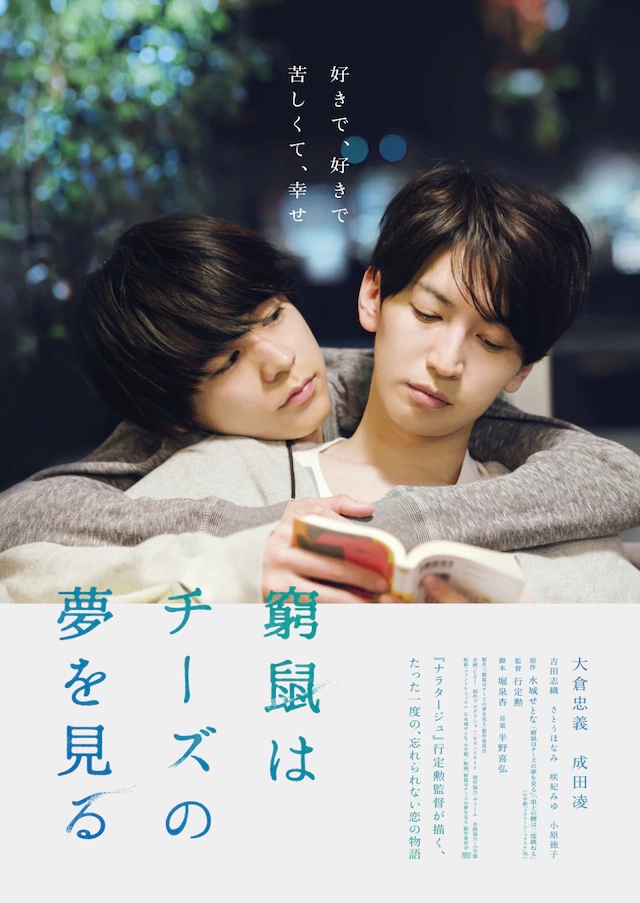 Kyoichi (Tadayoshi Okura) works at an advertising company. He has an indecisive personality. Even though he is married, he repeatedly has affairs. One day, a man appears in front of Kyoichi. The man is Wataru (Ryo Narita). Wataru graduated from the same universithy as Kyoichi. It's the first time they have met since Kyoichi graduated. Wateru currently works for a jack of all trades agency that does anything for their customers. He is sent by Kyoichi's wife to investigate whether Kyoichi is having an affair. Wataru tells Kyoichi that he has liked him for the past 7 years. He also tells Kyoichi that he wants to have a sexual relationship with him and in return he won't tell his wife about his infidelity.

Gkoi Feb 20 2021 12:29 pm I dont know why it has such a low score But I have to say the acting is superb! Both main leads did a great job on this. They successfully bring Otomo and Imagase into the real world as the real persons.

This is one of best J-movies for me.

You are afraid to love, but you need love. When you love with your whole heart, it somehow makes you lose yourself. The movie feels so real. (The ending of the film is not what I expect to see, but it ends as it should be... and personally, I think it is not the final ending for both of them.)

Deva Fassah Jan 16 2021 5:48 am I have to say that this adaptation is the best Japan made so far. I Love It. Even though the ending is not our ideal, but it is close to reality, it will broden your mind. Also, I did not expect Narita Ryo and Okura Tadayoshi would be so good at this. I am so convinced. I enjoy watching. My heart stops many time from the beginning ?

kkeyra Jun 21 2020 7:18 am whoaa the manga is like my favorite yaoi manga ever. kinda excited for the adaptation but idk, the casts didn’t really fit the image of imagase and ootomo I had in my mind. whatevs, hope the movie turned out to be good.

kurayamu Apr 18 2020 7:58 pm from the very start i'd like to commend Shiori Yoshida that her acting skills is already the best! i hope she can have more lead role in the future cuz' she's got a potential. I love this drama it speaks of reality of LGBT community

The manga is one of my favorites, and now the live-action has Ryo Narita in it. I'm done ???