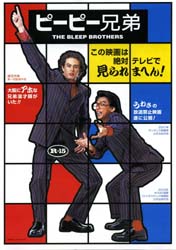 Two 30-something Japanese brothers work for their parents' funeral home. They transport the bodies. They do pick ups and deliveries. They watch the make-up artist put lipstick on the dead bodies. All the while the brothers work driving dead bodies, they dream of a better life. The brothers perform Manzai comedy at a local strip club, but they are not a big hit. Then one day, one of the brothers becomes frustrated and seriously veers off the scritped path. He starts ad-libbing sexually explicit stories about his own personal sexual conquests. The audience eats it up and the brothers are soon on their ways to stardom.