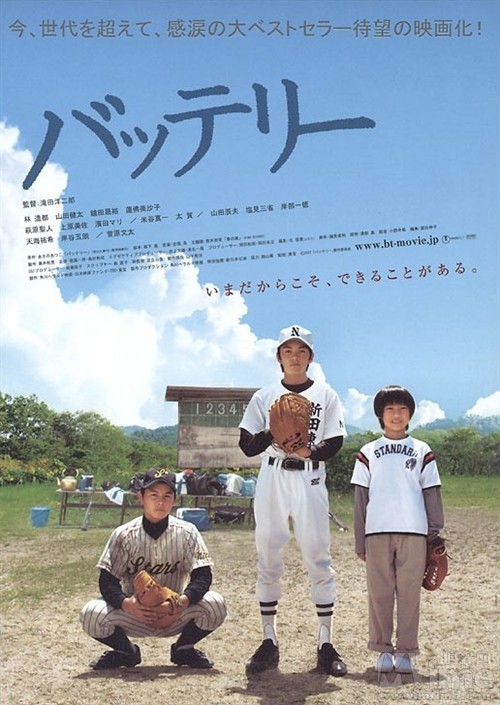 Takumi Harada (Kento Hayashi) moves to Okayama Prefecture with his family during spring break before his entry to Junior High School. On the baseball field, Takumi has enormous confidence in his ability as pitcher, but socially he is a loner and appears unapproachable to others. His family consists of his constitutionally weak younger brother Seiha (Akihiro Yarita); his mother Makiko (Yuki Amami) who is so protective of Seiha that she cannot help acting coldly to Takumi; and his grandfather Yozo who was once a famous high school baseball coach who lead his team to the national high school baseball convention at Koshien Stadium. Even his warm, caring family is not sure at times how to deal with the solitary side of Takumi. Takumi meets a new classmate Goh Nagakura (Kenta Yamada). Goh is captivated by Takumi's pitching and is eager to pair up with him as his catcher. The two join the Nitta East Junior High School baseball team, only to discover that baseball there is under the "complete control" of a dictator-like coach. Unwilling to compromise his beliefs, Takumi defies and clashes with the coach. His classmate Mayu Yajima is gradually attracted to Takumi's relentlessness. Takumi and Goh seem to beg doing very well together, until the disparity of their skills start to come between them. Eventually, Goh brings up dissolving their duo and Takumi accepts. Seiha desperately tries to bring the two back together. "You gotta pitch!" The two rejoin again, but just at that moment, Seiha falls ill. Takumi's mother pushes him away claiming that involving Seiha with baseball was the cause of his illness. However, the father Hiroshi suggests that perhaps Takumi had continued to play baseball to avoid worrying about his weak younger brother and to divert his mind from the loneliness of not getting attention from his parents. Finally, with his own life is in danger, Seiha asks Takumi right before the big game, "Make sure you win...okay Takumi?" With Seiha's words marked in his heart, Takumi heads toward the baseball field.