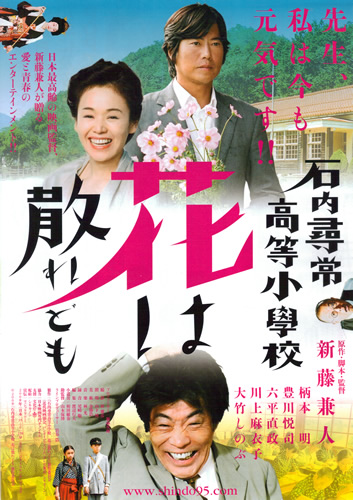 Set at the end of the Taisho era (1920s) at Ishiuchi Jinjo Higher Elementary School in the mountains of Hiroshima prefecture, there was a fervent teacher called Mr. Ichikawa (Akira Emoto). He always placed his pupils first and took any issues to heart. His warm personality is forever remembered by his former pupils. For Yoshito (Etsushi Toyokawa), who skipped town after his family went bankrupt, Mr. Ichikawa's memory remains especially precious. 30 years later, a reunion is organized to celebrate Mr. Ichikawa's retirement. Yoshito, who has gone to Tokyo but remains a struggling screenwriter, musters courage to attend the gathering where he has a tearful reunion with the teacher. Thereafter, Yoshito visits Mr. Ichikawa whenever possible, however, his advancing age means he is getting closer to the end of his life.