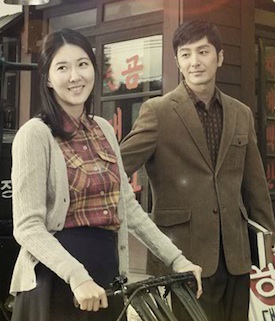 Bok-Hee (Jang Mi In Nae) is a girl who studies very hard and works at a brewery. When she was 5-years-old, her parents' divorced and Bok-Hee then lived with her mother. Her father died in a coal mine accident.

Bok-Hee came to brewery company Dukchun with her younger stepbrother after her mother married Song Byung-Man, the owner of Dukchun. Bok-Hee addresses her mother as "aunt," to avoid getting her mother into trouble. Finally, people learn that Bok-Hee is the daughter. Her stepbrother is sent off to an orphanage and Bok-Hee leaves for Seoul.

Joon-Mo (Ryu Tae-Joon) worked as a stuntman, but due to injury had to quit his job and come to Dukchun to work as a temporary teacher. Joon-Mo meets Bok-Hee for the first time when she peers through a classroom window in which he teaches. Joon-Mo sees the passion in her eyes and becomes her mentor.

lrt Dec 18 2020 11:37 am Finally a writer that knows how to write!!! Loved this. The evolution and mindset of the main character and how she changes peoples attitudes as she grows is worth the ride. Learned a lot about garment factories and old school rice wine making!

Clare Fagan Apr 23 2014 8:09 pm I just started watching Korean Dramas, and I love, love, love them!!! The best part of my day is when "Bok Hee" comes on! I would love to see a continuation of Bok Hee with the same cast of actors and actresses!

squidoo.com Jan 20 2014 7:48 pm Article Source: you looking for more information regarding business gifts for men. College students usually remember to take their razors, shampoo, and soap, but will they remember some of these other essential things. A gift is the best way to see an instant smile on the face of any person whether young or old.

penny Sep 14 2012 6:28 am What ever happened to the man who helped Boukee start her business. Love the show and am so sorry its over. Many people watch and hope they will continue programs with english sub titles

letty torres May 18 2012 7:40 am i love watching this drama i never miss it because there is a replay in the afternoon i wish there are still more to come.i congratulate all the cast of the drama they are all great in their acting .kudos to all and the director of course.thanks a lot

salwa wazwaz May 14 2012 12:37 pm i love to read, so with KBS and its english subtitles. i have been hooked for years. i love the series they are all great. but this series hit the spot. i love this show

sujubloom May 10 2012 5:57 am hi everyone! please update me about this drama.. the last time i watch was when bokhui is trying to save the winery.. what happened to every character especially young pyo and geumju? our kbs channel has been moved to digital cable so i can no longer watched this as well as my other favorite shows such as 2 days and 1 night and musicbank.. so sad :( thanks for future reply..

Pat McClenton May 03 2012 9:59 am I love Korean dramas! Now I can understand them with the English sub-titles. Great story lines. Oh, how I wish they were on for a longer time period - like an hour!

loudette Apr 30 2012 9:19 am ...nice drama...I love watching this drama because of Yeongpyo and Geumju...hope Bokhui ends up with Mr Hong and not pathetic Mr. Kang who spoils his stepdaughter...Mr. Kang should end up with the "puppy" nurse as she's willing to look after the spoiled stepdaughter... Hoping dear my sister will have a happy ending...Geumju marrying Yeongpyo upon her return from France.

Donna Apr 19 2012 8:01 pm I have been watching Korean dramas for about three years and I want to say this is not only a slow starter but one of the worse dramas I've seen so far.

Mufaaz yousuf sheikh Apr 19 2012 10:49 am I am from Kashmir I do not know about Korean language.Thanks to channel we are able to watch and love Korean channel. About Dear my sister is the best and great drama.Please continu it FOREVER we will love to watch it till the end of world . I have two sisters in drama and mr and mrs kana .That means their acting is superb.About BOkhia she is tremendous I wish I would have that type of attitude GREAT WORK!!!!!!!!!!!

Iris Apr 04 2012 8:19 pm Geumju's just horrible, who cares if she's pretty. Call me crazy but Bokhui and Yeongpyo would be so much better together.

Cleo Feb 18 2012 6:05 am I knew about the time slot change but I just found out my dear sister shows on saturday w/subtitles as well...how long has that been goin on? Im soooo excit

Cleo Feb 17 2012 6:17 am Im not an early bird by far...but I get up every mornin @6:20am(since the time slot changed) religiously to watch this korean drama...im half korean so korean drama is nothin new to me but this korean drama leaves me wantin to see more all the time..I CANT WAIT TIL MONDAY...LOL!!!

Helen Feb 15 2012 9:04 am I have watched this drama series since it started but for the past 3 days I wasn't able to watch it since you changed the time slot. I really love this drama novel.Are there any replays. Pls. update I love all the characters especially Boknam he's so cute. Thank you Kamsamnidah.

Hussain Isa Feb 07 2012 9:52 am I've been watching the show until recently, where I've to start work. Thus, it cos me lot of heartache. So may i know where I can watch episode 56 onward. It has great storyline, simple n easy to understand. Plus the acting by all the actors n actressess are good. Keep it up guys.

Cleo Jan 27 2012 9:44 am When you were born into a poor family back then this is how rich korean people handled the poor...you couldnt eat from the same table or get paid for your services similiar to slavery how the white folks handled the black folks...nowadays its gotton better in korea...but on a better note I love this korean drama and I cant wait to see the rest of it

Darlene Jan 25 2012 12:53 pm I am horrified by the way the grandmother is abusive as well as the young girls in the family. Is this a true depiction of the Korean family?