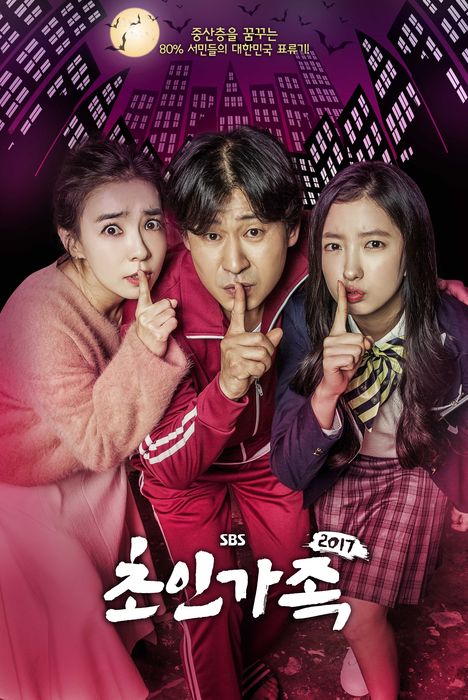 Chun-Il (Park Hyuk-Kwon) is married to Ra-Yeon (Park Sun-Young) and they have a daughter Ik-Hee (Kim Ji-Min). Chun-Il works as a salaryman and tries to survive at his company. Ra-Yeon is worried about her husband's low salary and Ik-Hee going through adolescence.

Hsu Nov 20 2022 7:07 am It take me time by hesitating many. I thought it would be just a funny, sloppy drama even though park sun young starred in it. Looked down to this. But I started watching a few, I really got to know how realistic and effortlessly funny yet meaningful about parenting, ordinary family, a teenager behavior. It shows how ordinary families build their families. I agreed with @Deedee.

Hater of Na Ik-hee's character Feb 11 2020 9:32 pm When i watched this drama, i felt grateful that none of my nieces and nephews acted like Na Ik-Hee who didn't want to know the financial situation of her parents and could only demand for this and that...

Deedee Jun 13 2017 3:38 pm This drama seems like very simple show but every episode is so appealing based on reality of decent social life. Always gives me a good laugh of this family. Love the father, Na and mother, Maeng and their beautiful daughter, Ik-hee.

aqeela Apr 26 2017 3:08 am this show really funny and entertaining but why no rating at all ckckckckk

Bill Apr 14 2017 4:02 pm The entire cast is terrific but I think the chemistry between the three actors playing the family is exceptional and the comedic timing between them is impeccable.

Fun show and a great opportunity for me to listen to contemporary Korean.

Michumichu Apr 02 2017 12:05 am This drama i can relate with myself and others..its not easy as parents as kis as youngster..but we can see how they work hard for their little happiness...like episode 12 were the got 3 training and know someone get connection...the twist is thers and the young man who work hard and the end cant get the job...i can relate because nowdays its so hard to get work within your study...

Hua-wei Mar 25 2017 2:47 am Many young netrizens don't like to watch all this family dramas but some of them are really good and reality in life. They should make some times to watch some of it. It is a lesson to learn in these days. Maybe, I found it useful after I have a family and teen kids. They only know how to demand and never care or know how difficult their parents earn their money? Yes, now generation is so much different from before, a lot of hitech devices are needed in modern lifes but please don't forget, there are also a lot of workplaces needed part-timers, why can't they work? Most of them just want to make excuses that they need to sturdy, busy for assignments etc. By right, they busied texting, whatsapp and surf internets.

Reeves Mar 25 2017 2:25 am Wth! the toilet cleaner lady stood there and talking with the man still peeing in the toilet like nothing is embarrassing or shy. I think only Korean societies are too open. Please, have some dignity and praise!

nesganes Mar 02 2017 5:42 pm I didn't know this drama could be so fun and entertaining! They teach you to value small things in life, and how we should always be grateful for everything. This drama also give you some tips to deal with everyday struggles especially if you live in korea. xD If you want to watch a family drama that not too heavy and Funny as hell! I highly recommend you to watch this drama.

Kelly Willy ani Feb 20 2017 4:14 pm Although i didn'f watch family's drama cuz have many episodes but only for hoya,i'll watch his drama!!