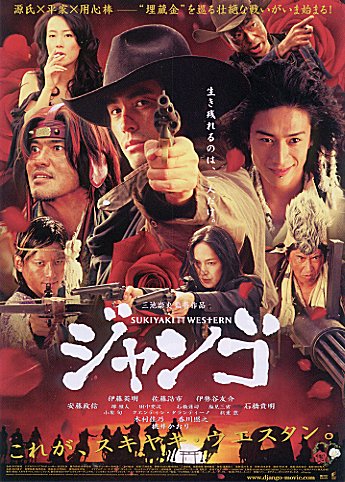 Several hundred years after the Battle of Dannoura, the Genji and Heike clans face off again in a poor mountain town with a buried treasure legend. Yoshitsune commands his Genji gang in white while Kiyomori leads his Heike gang in red.

A long gunman, burdened with emotional scars and blessed with incredible skill, drifts into town. Expectations collide as the key players wonder which gang the gunman will join.

Dirty tricks, betrayal, desire and finally, love, get jumbled together, as the situation erupts into a showdown.

ace Feb 06 2019 6:57 am Remake. Homage. Pastiche. Call it what you will. This is a pretty great movie. Great cast. Great director. Good set design. Good cinematography.

anonymous May 15 2013 1:55 pm I'm sorry for the fans of this movie, but if you are a native English speaker, you are going to have a tough time handling this movie. I got to the 20 minute mark and had to just stop. This movie has amazing style with an amazing cast, but the dialogue is just.. so rigid.

tyloaklywat Oct 12 2011 12:18 am Howdy I will be lucky to view only you can spot Now i'm totally new to the aboard, and then prefer to show by myself referred to as in the next full week. If you happen to explore some other sort of message boards, you might look at everyone upon them moreover. I do hope you are experiencing a fantastic time of day.