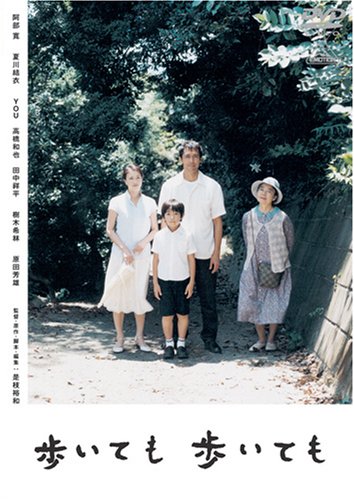 Ryota (Hiroshi Abe) is the 40 year-old son of the Yokoyama family. He has recently married a widow with a ten year-old son from her previous marriage, who are joining him on a rare visit home. Only his elderly parents now live in the house, which once doubled as a flourishing medical clinic. The annex, a medical examining room still boasting a wall of pharmaceuticals, remains unchanged, though the patriarchal doctor has retired. Despite the unchanged outward appearances, everything has slightly aged.

The family has gathered to remember Junpei, the eldest son, who died in a terrible accident fifteen years ago. Ryota has never lived up to his brilliant brother who was supposed to take over the family clinic and remains uncomfortable with his father. He arrives home, determined to hide the fact that he is currently unemployed ...

Ki Jan 27 2009 8:44 pm Hirokazu Koreeda, well known for such film festival favorites as “Nobody Knows” and “After Life,” has struck gold (again) with his latest film “Still Walking“. Koreeda stated the idea for the film came about from his own personal experiences, specifically the feelings of regret he holds from not interacting more with his parents prior to their deaths. With that said, “Still Walking” isn’t about histrionics or death bed scenes. Rather the film takes place over a one day period, some 15 years after the first traumatic event in the Yokoyama family and a few years before the next traumatic event.

In “Still Walking,” Ryoto Yokoyama is the second eldest son in the Yokoyama family. The day is the 15th anniversary of the death of his eldest brother, Junpei. Ryoto takes his newly married wife Yukari (who herself is a widow) and his step-son Atsushi to his parents home for his brother’s anniversary. Ryoto works in the painting restoration business, but he’s currently unemployed. He asks his wife not mention his job status to his parents. Ryoto’s parents are still reeling from the death of their eldest son fifteen years after his death.

With this set-up the film then wallows in the miniature life of the Yokoyama family for an all too brief, but memorable, one day period. Much of the time, Koreeda focuses on the family nucleus, from mother Yokoyama (played brilliantly by Kirin Kiki) preparing dishes with her daughter Chinami Kataoka (played by You - the mother from Koreeda’s Nobody Knows) to the terse conversations between Ryota Yokoyama and his father Kyohei Yokoyama (Yoshio Harada). Watching these scenes, images of my own life as I visited my parents in Korea came to life. But before you erroneously conclude this film might be nothing more than a prolonged “Joy Luck Club” type of montage, guess again. All of the characters are flawed to a realistic perfection. Even the seemingly genial Mrs. Yokoyama has a bite familiar to most Asian folks, but perhaps surprising to western audiences. Although she never raises her voice, she cuts to the chase when the moment fits, telling her son in no uncertain terms to not to have a child, because it’s easier to divorce without children. Furthermore, Mrs. Yokoyama tells Ryota’s wife that in her days women never emptied a glass of beer in front of men. This only a few hours after Ryota’s wife drank leisurely with her husband and his father. Right or wrong, these types of cross-generational clashes arises in Asian family get-togethers and Koreeda recreated those moments to sublime perfection.

Ryota’s relationship with his father is more estranged. Ryota, the black sheep of the family, feels the pain from his parents unbridled love for his deceased brother and, also, his own inner guilt from not living up to his parents’ standards. Furthermore, like real life itself, Ryota’s feelings isn’t always black and white. Although Ryota feels bitterness towards his parents, he’s also very concerned for their physical well being, although he will never tell his parents so. When Ryota notices the newly placed handrail in his parents’ shower, his concern over their physical well being is shown clearly in a few solitary seconds.

The film’s theme, specifically the pain incurred from taking family members for granted, will likely reverberate with you long after the end credits roll around. Thematically the film will bring to mind another recent Japanese film, “Tokyo Tower: Mom and Me, and Sometimes Dad” which just so happens to also star Kiki Kirin, but “Still Walking” is a stronger film, more real film, and ultimately more fulfilling film. Kudos to Hirokazu Koreeda for making such an insightful film on parental relationships with their grown children. I’m already excited about Koreeda’s next film…starring none other than South Korean actress Du-na Bae.