Stay The Night at The Grave 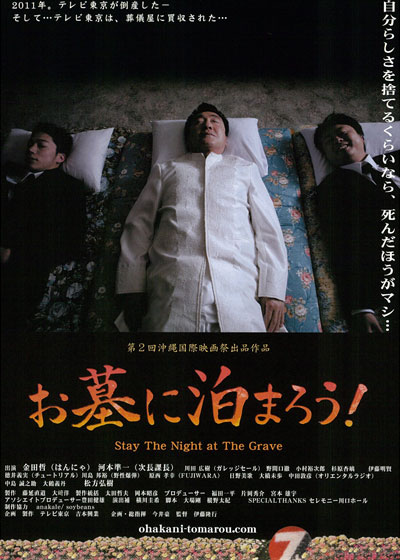 When the transition to digital TV completed in 2011, TV Tokyo went bankrupt. TV Tokyo is bought out by a funeral home. Many employees depart and broadcasts are cut down to just three hours a day, with most time being spent helping out funerals.

Imai, who had joined the company because of his love for TV Tokyo's variety programs, is utterly disappointed at how the network has completely changed. The saddest thing of all is that Ito, the producer once referred to as the "Hero of Variety Programs," is transferred to the Funeral Bureau. Is this reality?

Just then, a news comes in that could turn things around! The former company president, Shimada has died. His only dying request is to turn his funeral "into the world's most ridiculous funeral" Heeding the president's request, the producers set about making a good-for-nothing funeral program. Is this a documentary depicting a drastically changing TV network? Or is it fi ction? No, it's action! Oops, I haven't even started fi lming.- Okinawa International Film Festival