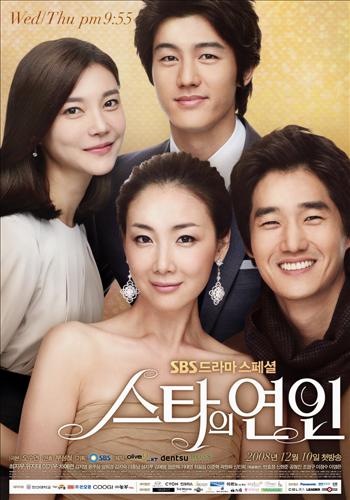 As the ghostwriter for star actress Lee Ma-ri’s bestselling travel essay ‘Lovers in Asuka’, Chul-soo gets to meet Lee Ma-ri one day. Around that time, Lee Ma-ri also has a chance meeting with Jung Woo-jin, who happens to have the same name as her first boyfriend. She feels her heart flutter for the first time since her former boyfriend Kang Woo-jin suddenly vanished from her life. Lee Ma-ri finds out that Jung Woo-jin became interested in her after reading her travel essay, which was actually ghostwritten. So she tries to brush up her knowledge of culture by contacting Chul-soo for private lessons. So this is how Chul-soo and Lee Ma-ri meet again. However, Chul-soo's life becomes complicated after Lee Ma-ri enters his life. Meanwhile, Byung-joon, a friend of Chul-soo and a journalist, discovers that Chul-soo is the actual writer of the travel essay, "Lovers in Asuka" and so he proposes that Chul-soo sell a story about Lee Ma-ri's personal life. He urges Chul-soo to seriously consider his proposal because he knows that Chul-soo needs the money desperately for his ailing sister. While Chul-soo weighs his options, Jung Woo-jin returns to Korea and Lee Ma-ri becomes more concerned about improving her cultural and literature understanding so she asks Chul-soo to live at her home to teach her intensively. Amidst this, Lee Ma-ri and Jung Woo-jin begin to see each other more frequently and Chul-soo becomes indispensable to Ma-ri as a private tutor. One day, Chul-soo realizes that he is no longer needed by Ma-ri and this triggers conflicting emotions within him. Since Chul-soo is pressed for money to pay for the operation that his sister desperately needs, he decides to sell his story about Ma-ri's personal life to his journalist friend Byung-joon. When the story about Ma-ri turns into a big scandal, Woo-jin’s resolve to marry Ma-ri becomes stronger and he proposes marriage to her. As a wedding gift, Jung Woo-jin tells Ma-ri that he'll bankroll a documentary film based on her travel essay, "Lovers in Asuka." He then asks his former professor to recommend a couple of writers for his documentary film and that is how Chul-soo and Eun-young join the film project as writers. When Chul-soo and Ma-ri meet again during the filming of the documentary...

Kate Apr 09 2021 8:57 pm This is a heart-wrenching drama and I was literally feeling with how the characters feel in it. Their struggles was too tough and they surpassed it. It's a great drama but it seems that I don't want this type of genre. It's too heavy for me.

Madina May 23 2020 5:51 pm I love this drama, the story is amazing. I see this drama after follow drama yoo ji tae When My Love Blooms.

Jho Dec 14 2017 8:59 pm one of my favorite kdramas of all time... the lead stars gave justice to their characters.. the story was so intense and very emotional.. u can also feel the pain of lee ma ri of wanting to love and be loved. She has everything but she's lonely...and ji-tae whooo you're my first crush hahahahaha. I super love his acting and his character here.. i super recommend this kdrama... watching this again for the --th time...and the ost of this kdrama was super good.... though im so sad that this kdrama was not really given recognition way back then.

mei Dec 05 2017 10:35 pm It is one of her best drama, her acting from a naive, innocent but adored actress, to this woman in love, what a heart wrenching story, the story is solid as well. She is so beautiful in this drama. Yoo, was a movie star already and supported CJW very well indeed, much had been said by previous people. My only complain is the director interjected a lot of unnecessary scenes by the sub casts.

Carolina alvez Oct 23 2017 9:43 pm this is a great drama about what true love is. I read some unfavorable comment about Choi , her melodramatic play and that she has aged. Well, she may have aged but for me, true beauty is found in her heart. That's why I love her. Her drama is all about love and in Stars Lover she cries a lot becoz though she has everything, and full of love to give yet she was wanting of love. A great lesson to everyone.

Larry V Jan 04 2017 1:50 pm Who is the composer of Star's Lover instrumental "Love Kiss?"... a very beautiful piece of music. Though there are several great songs in this drama. My favorite drama and favorite actress CJW.

Harry Sep 20 2015 3:50 am Really awesome drama! I have seen Choi Ji-Woo in First Kiss and Yoo Ji-Tae in Hello Schoolgirl. But to see them together in this drama was a treat! Their chemistry was one of the best i have seen. The plot too was interesting and it had the momentum going without getting bored. The ending was great and I felt the drama concluded in a very holistic manner without leaving any loose ends.

One more thing i liked was the cute romantic subplot between Lee Jun-Hyuk and Shim Eun-Jin. It was nice to see their funny scenes.

Overall a great kdrama with a good story for people who love happy endings.

Clarkdale44 Jun 25 2015 5:08 pm Outstanding performance by both leads.... Specially Choi Ji-Woo... its no surprise that she amazed me yet again. I am gonna keep it short. The plot-line was good enough that i was stuck to my seat until the end. But casting really does makes sense, i wouldn't have watched it so seriously if it wasn't for the main leads. There was no hardly any scene that i could skip nor i found any boring scene. Every scene was full of emotions. I don't regret spending 20 hours on it, i can proudly say"it was worth it."

(Read further only if you have finished watching this drama.) Although i liked the ending, i still feel bad for the supporting leads, specially bad for Choi Eun-Young. She supported Chul-Soo during his down time. She even helped him publish novel without his knowledge several times. She liked him since long before Chul Soo met Ma-Ri. It feels sad, she was great for him, yet i don't understand why he didn't liked her in the first place. I wish there could be an alternating ending, where Chul soo could end up with Eun-Young,, same goes for Jung Woo-Jin.

GEM Feb 24 2015 8:33 am Love the chemistry betwn CJW & YJT. The interplay of emotions were so charged that I was afraid my screen would sizzle to fire (phew...especially those kisses..omg!) Have personally like YJT since I've watched a few of his movies before...CJW is an added bonus. Only started to watch SL after Temptation..M gonna watch SL again, Heh heh heh!

naraya Feb 19 2015 11:54 pm Love CJW and YJT here. YJT was splended and CJW was like Giana in My Love From Another Star, they situation prety much the same and both acting was really great.

dramaqueen Aug 17 2014 9:28 am I just watched this, the best happy ending love story I've seen in Korean drama history! Love that it has a happy ending! Need to see more like this! Please show more love stories with CJW with happy endings! These days we need more of feel good movies. I'm watching Temptation with choi ji woo now, beautiful as ever! Love the drama!

CJWFAN Aug 03 2014 8:52 am This is one of the best korean dramas I've seen. I've watched this many times not too long ago and think it is even better than some of the #1 korean dramas of today based on "ratings" which I don't think is very accurate. CJW and YJT are such great actors and the drama didn't get the recognition it deserved 5 years ago. Love CJW!

herbmom Apr 02 2014 2:23 pm I have mixed feelings about this drama. YJT and CJW were excellent as the lead characters, and really carried the whole show. CYR was so annoying. Her story line went on waaay too long and I cringed every episode when she would show up again. Get a life!! The writing was a mixed bag. The middle was very boring, but in episode 19 things were resolved in a lovely way. The ending was enjoyable to watch....no drama, just fun to see the couple working it out. LKW's talent was wasted, as he had nothing to do.

msPeachy Jun 21 2013 8:13 am Just finished watching it. I love the chemistry between the two leads, the acting was great. I love Ji-Woo and Ji-Tae, they look good together.

Shu May 02 2012 5:15 am I love the plot. I love the lead cast. I love the costume changes. There is so much love,so much sweet pain and the ending is great! Yoo Ji -Tae is soooooooo dreamy, I'm sad to know he's already married.