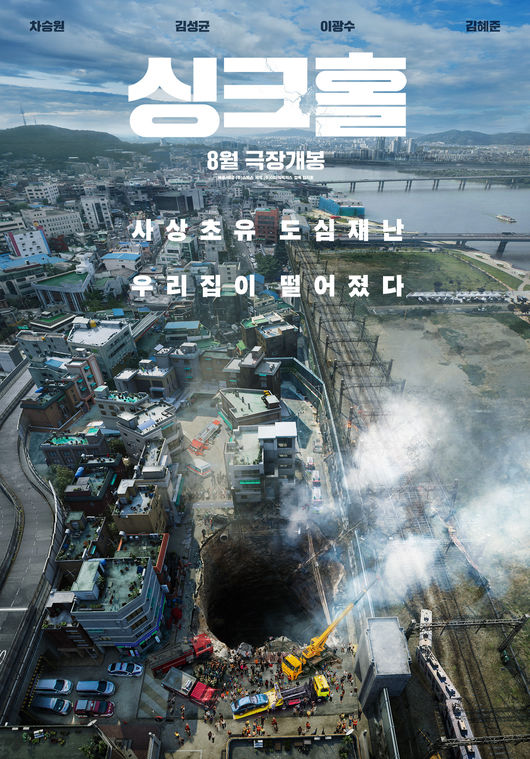 Jung Man-Soo (Cha Seung-Won) is a resident of Chungwoon Villa, which is a cheap apartment building. He works hard to raise his son alone. Park Dong-Won (Kim Sung-Kyun) works at a company. He finally becomes a homeowner after 10 years, but his home falls into a sinkhole. Park Dong-Won and his co-worker Kim Seung-Hyun (Lee Kwang-Soo) are stuck in the fallen house.

Dudu mi me mo Oct 17 2021 5:32 am Came here for Kwang Soo oppa. A bit unrealistic like the poster itself. But it’s fun to watch if you are looking for something light and funny. No spoiler haha

This is a simple movie but relaxing and heartwarming too.

Eme alh Oct 01 2021 10:53 am One of the best Korean movies I've ever watched, loved the balance between the comedy and the tragedy. I literally cried and laughed like an idiot. Their acting is brilliant and superb, I felt the tension like I was there with them. It kept me interested from the first to the last second. Highly recommended!

GG Sep 25 2021 11:48 pm Just watched this today as I had it on my “to watch” list at random to see Cha Seung-won and was waiting for English subs. I know it was filmed in 2019-2020, but just came out in August 2021, two months after the collapse of the Miami Fla USA condominium collapse. The story was funny at first until building fell into sinkhole, and then I realized it was not a comedy but a real disaster movie and eerily similar to the Miami condo collapse. OMG, I cried the rest of the movie until the end. I won’t spoil it for anyone but I’m absolutely stunned by the similarities to the real disaster. I will say as a Fictional Movie, it was Exceptional! Everyone of the actors and actresses and the filmography were incredibly real and intense. Kudos to the whole crew who made this movie and prayers for the unfortunate people who were lost in the real disaster that was so similar.

Ley Sep 24 2021 10:00 pm It's fun to watch! It's a disaster movie but it's actually funny~ though there will be touching moments too.. this movie feels like the movie EXIT.. disaster comedy, a good watch too~

zia Aug 27 2021 11:42 am Never thought I'll have a super great laugh with the rest of audience in cinema throughout the movie! Ofc there's some touching moments which broke my heart, but overall its a very pleasant comedy disaster movie, huge thumbs up to the great actors actresses and even the graphic just so awesome!

linda Jan 07 2021 6:09 am Cha Seung Won oppa fighting!!! Hope you will shine in this movie besides giraffe Kwang Soo.

Nameless Nie Jun 05 2020 5:59 am I am too interested in Lee Kwang Soo and Lee Sun Bin Couple. I am also expecting Lee Kwang Soo to cast in a new Drama like 'Live'.

Nameless V Mar 07 2020 5:30 am Lee Kwang Soo Fighting. Actually I am curious about Lee Kwang Soo and Lee Sun Bin after their dating news. No other updates after than makes me some what nervous. I am really rooting for this couple.