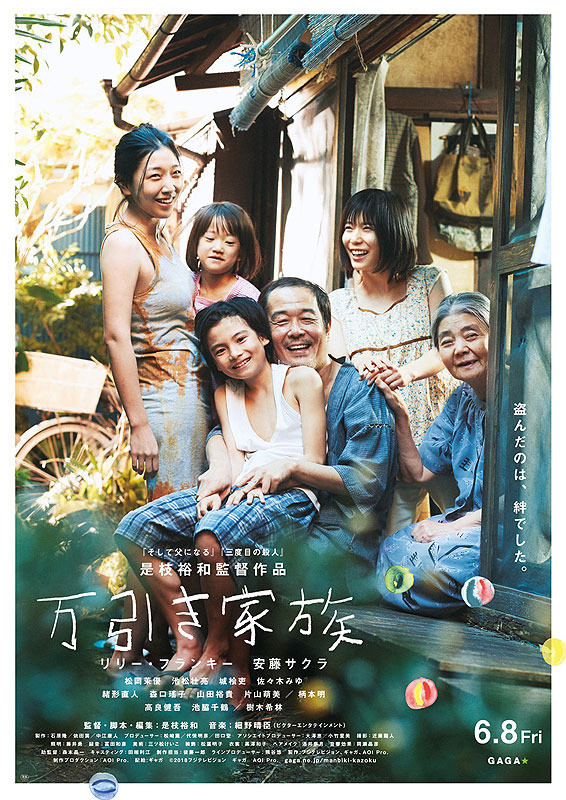 Osamu (Lily Franky) works as a day laborer. He and his son Shota (Kairi Jyo) like to shoplift together.

On the way back home from a shoplifting session, Osamu finds little Yuri (Miyu Sasaki) freezing. He takes her home with them. His wife Nobuyo (Sakura Ando) gets angry at him for bringing the girl home, but she takes care of Yuri. Also living with them is Nobuyo’s younger sister Aki (Mayu Matsuoka). The family relies on their grandmother Hatsue's (Kirin Kiki) pension to make ends meet. They are a poor, but happy family.

K Feb 26 2019 11:35 am Just finished watching this movie. Man! what a masterpiece. As expected from Koreeda! Great list of cast, everyone (even the child actors) plays their roles well. Sakura Ando especially, her performances is just brilliant!

doram Feb 22 2019 11:00 pm Maybe it's just me but I expected too much from this movie. This movie might won the award, but if I have to recommend Koreeda's film, this is definitely not on my top list. His other movies are still better than this... But again, this is just my personal opinion.

Aya Feb 14 2019 5:35 am The movie's heart warming and I really love Shota's character. All of the casts really did well but my attention was caught by Kairi Jyo. Hoping that he'll be receiving more acting projects in the future. The ending's unsatisfying though ?. How about Lin/Yuri's character? Aki too? Waaah I need to know so that I'll feel at ease. ?

Yuko Mar 17 2018 5:57 pm A great cast, interesting trailer and the poster looks really beautiful. Looking forward to the movie, it seems to be great.