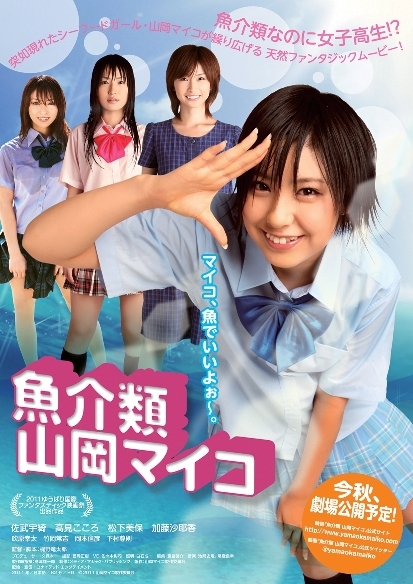 Kamoka and Inuo are at the beach picking up seashells. Suddenly, Kamoka spots a girl sprouting out of the water dressed like a high school student. The girl's nam is Maiko and although she looks human, she is actually a fish! Kamoka ends up taking Maiko back to her apartment.

Kamoka and Maiko eventually strike up a close friendship. One day, Kamoka, Maiko and Inuo go to Inuo's friend Mochiro's house for dinner. Kamoka mistakenly construes Mochiro having feelings for cute Maiko. What they don't know is that Mochiro has other plans, specifically to cook up Maiko as a fine cuisine dish! A sudden transformation also starts to take place within Maiko ...

Q&A took place after a screening of "Seafood Girl Maiko" at the 2011 Puchon International Fantastic Film Festival on July 17, 2011. Appearing on stage is director Ryutaro Kajino, actress Miho Matsushita, and a person dressed in a red suit. AsianWiki editor Ki Mun was there and transcribed/translated the session.