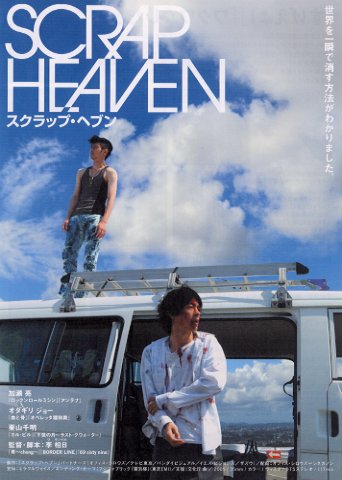 Shingo is a frustrated clerk at a police station, Tetsu is stressed out over his mentally ill father and Saki has an inferiority complex over her artificial eye. Together they have the misfortune to be riding the same bus when a terrorist strikes. Shingo is frozen with fear as he helplessly watches Tetsu get shot and the gunman take aim at Saki. A few months later, Shingo is back to shuffling paper at his dead end desk job with no hopes of becoming a detective. He also still suffers guilt over the bus incident. One day, Shingo coincidentally runs into Tetsu and he pours out his suppressed feelings about the shooting. Together they fantasize about revenge, talk about retaliation and how they can make a business out of it. Their scheme is simple. A client must provide ID credentials. The request for revenge cannot be revealed to the third party. There is no second chance and nobody gets hurt. They scrawl graffiti to solicit customers and begin to get customers. Their first clients include a patient after a doctor for malpractice and a kid who wants to get back at his abusive mother. Tetsu and Shingo keep playing the revenge game walking the thin line to becoming full on criminals! Shingo starts to crave the feeling of power and omnipotence. He feels some debt to Saki after the bus attack but his efforts to help her always fail. Meanwhile Tetsu increasingly approaches the revenge game like child's play and hatches a plan to steal guns from police boxes. Eventually, the game goes too far and Tetsu and Shingo dangerously spin out of control.

b Jun 01 2009 1:40 am does anyone know the song from the fight scene where shingo is fighting the sleazy guy above the subway?