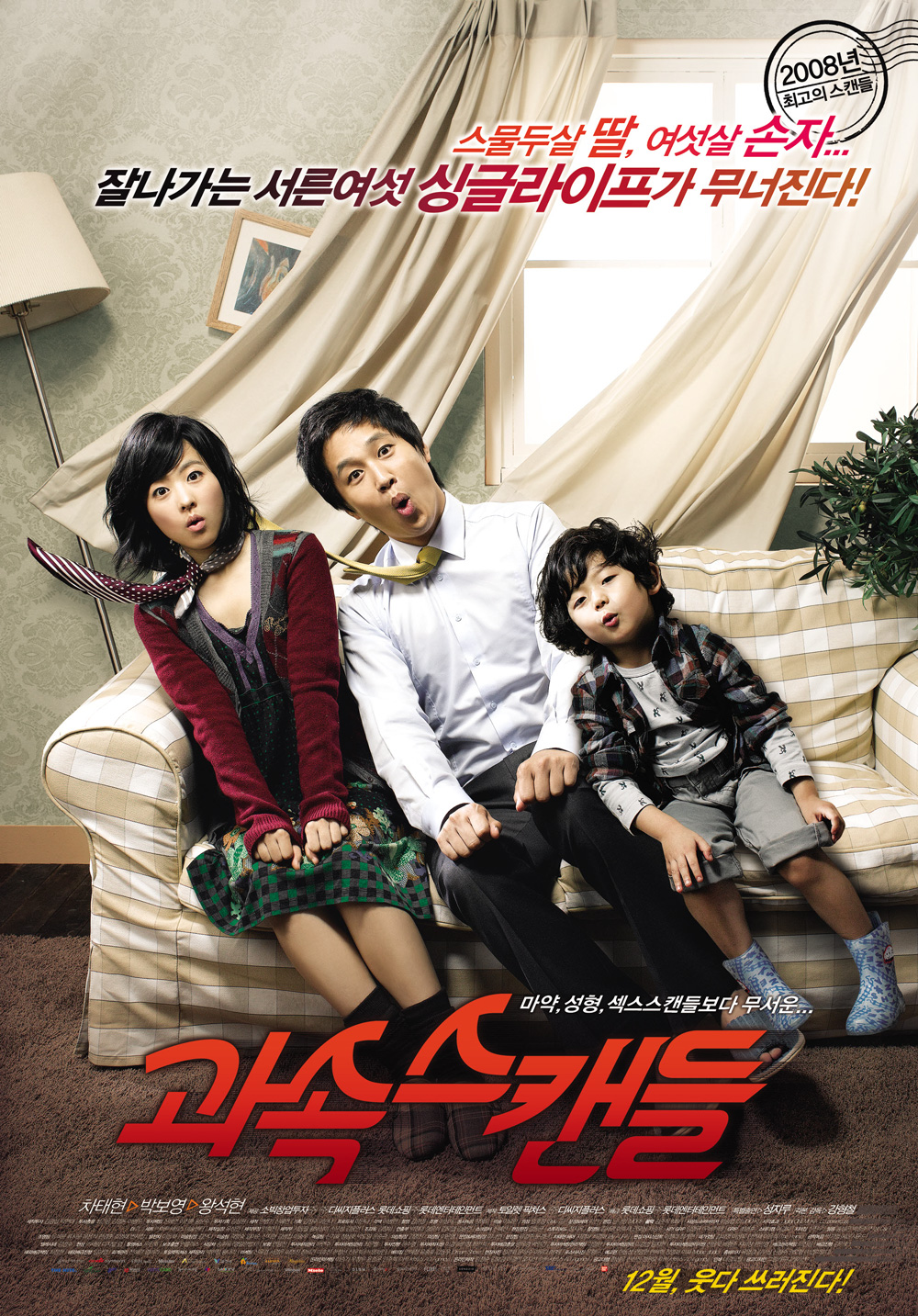 Mid 30's Nam Hyun-Soo (Cha Tae-Hyun) is a popular radio DJ and entertainer. When he was younger, he was even more popular as a teen idol.

One day, his apartment doorbell rings and a young lady named Hwang Jung-Nam (Park Bo-Young) appears and a young boy appear on his doorstep. The young lady tells Hyun-Soo that he is her father and he is also a grandfather to her son Ki-Dong (Wang Suk-Hyun). Hyun-Soo not believing any of this, attempts to close the door, but when Jung-Nam threatens to go to the press he allows them to stay in his apartment. Complications arise when they are spotted outside and people assume they are romantically involved! 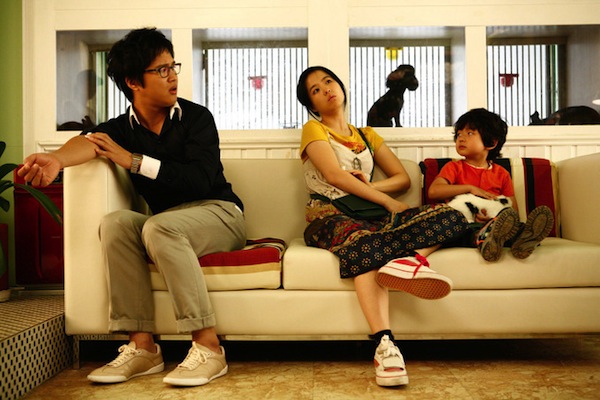 Terry Apr 03 2021 10:13 am I don't normally watch any Kdramas or movies before 2010 because the style and fixtures are not nostalgic at all. But i watched this and i can say it actually didn't really feel like an old movie. My only problem with the show as a whole was the singing and the obvious bad lip syncing. Seriously, they could have found an actress that could sing, and i love bo young so its not her particularly, and they would have had better scenes.

Amyus Nov 12 2016 8:03 am As already commented upon by 'Ki' (see comments below) 'Scandal Makers' does explore already familiar themes and in that respect it can be compared to '200 Pound Beauty' and similar. There are the somewhat predictable highs and lows and 'Scandal Makers' has the obligatory 'cute' child as well, but the story ambles along at a good pace with the actors clearing enjoying their respective roles and it is that that makes this film a winner. We, the viewers, are drawn into the story by the performances as much as by the clever script. Ignore the inconsistencies, grab a bowl of popcorn and sit back to enjoy a daft, silly and fun film with some great music and a huge helping of 'heart'. I particularly enjoyed the end titles cover version of Katrina and The Waves' 'Walking on Sunshine'. This film will leave you with a big smile on your face.

You Funny Person Dec 20 2015 8:19 am @베아 They didn't talk about the woman very much, but the theme of this movie is about family, not racism, so she was most likely not Filipino because in most Korean movies, people from some other Asian countries are treated with disrespect and racism. And yes, the child is Park Bo-Young. All we know about the woman is that she was older(I think they said by 5 years) than the man who impregnated her when they had sex(only once) and they loved each other, but had to break up because their lives would take different paths.

베아 Jan 18 2015 9:45 pm Sorry if this is a stupid question but, I thought I heard someone saying in the movie that he (the father) made a Filipino woman pregnant, and that this child is Park Bo Yeong? Or was it just an assumption of someone? Do we know anything about the mother? I watched it without subtitles in Korean so I didn't that part lol...

ace Nov 03 2014 2:46 pm Pretty funny at times. He was such a jerk but I really felt for him and how upside-down his life was tossed upon their arrival. On the other hand, the kids were jerks too but i felt for them too. But while there is the obligatory familial bonding through conflict that is popular in film, it is the comedy I enjoyed the most. I especially liked the grandfather and grandson relationship. They bonded over gifts and the teacher. The kid was a little ninja while getting info. Park Bo-Young had the best dialogue though. I have not seen her in anything before that I recall but I'd watch her again.

kai Sep 30 2014 7:48 am omg no awards to our Cha Taehyun?! actually he is the one who moved my heart completely when he scream "Don't touch my daughter!!" and when he hit the man who made his daughter pregnant... Love you Cha! Our family-comedy actor~ ♥

Imelda J. Valdez Apr 26 2014 10:12 am A very funny but a good movie to watch especially for parents and kids having difficulties to understand and accept each other's situation because of some reasons.. Isaid it already but I would like to say it again Cae Ta-hyun is a good actor... I like him really.

Imelda J. Valdez Apr 26 2014 9:21 am A very funny but a good movie to watch especially for parents and kids having difficulties to understand and accept each other's situation because of some reasons.. I laughed and cried and smile... Cha Tae-Hyun is really a good actor. I like all his movies that I have watched...

Such a GREAT MOVIE :P

this movie never fails to make me laugh!!!(really!)

RaX Sep 25 2011 7:52 pm Just watched it yesterday from mall of asia, was a pleasant surprised. I would recommend this film.

it's not a movie with the most wonderful storyline, but all the little hilarious acts and the few touching parts made it all up. the kid is just too cute to resist and the female lead, Park Bo-yeong, is considered a very good actress for a newcomer. Of course, the reason why i'm watching the show - Cha Tae-Hyun didn't disappoint me with his (comedian) acting. :)

I watched this movie in the airplane way back to Dubai. I really love watching korean movies. I liked the story. It was funny that everytime I was travelling through airplane, Cha Tae Hyun's movies are there. I watched My Sassy Girl, Babo and this movie already. He was a good actor. Also Park & Wang, their's so cute! Good acting..wihihi..XD

Ki May 26 2009 5:49 pm Somewhat like “200 Pounds Beauty,” last year’s “Scandal Makers” turned into a huge sleeper hit that would go on to become South Korea’s top box office draw of 2008. That includes even surpassing Ji-woon Kim’s highly anticipated “The Good, The Bad, The Weird” in ticket sales. What made the success of “Scandal Makers” even more surprising is that the movie doesn’t have any big names. It does feature Tae-hyun Cha from “My Sassy Girl” in the lead role, but Cha hasn’t had a whole lot of success since Sassy Girl. So what’s the attraction of “Scandal Makers” you ask? Well, the movie cleverly adopts traits from “200 Pounds Beauty” that made it a hit and builds upon that foundation its own feel good story. The film also features a precocious little kid that will have a lot of people raving.

In “Scandal Makers,” former teen pop star now in his early 30’s Hyeon-su (Tae-hyun Cha) attempts to resurrect his entertainment career. He currently holds a low profile job as a radio talk show host, but hopes to use this gig as a stepping stone for better opportunities. One day, Hyeon-su receives a knock on his door and is surprised to find a teenage girl standing on his doorsteps. The girl named Jeong-nam (Bo-yeong Park) claims to be his daughter and also has with her a young boy who she claims to be his grandchild! Hyeon-su not wanting to believe any of this, asks the mother and son to leave, but Jeong-nam’s threat to go to the media makes Hyeon-su have a quick change of heart. Hyeon-su then allows Jeong-nam and her son to stay in his apartment as he devices a plan to quietly rid himself of them. Things become more complicated when Hyeon-su and Jeong-nam are spotted in public and assumed to be romantically involved.

The similarities between “Scandal Makers” and “200 Pounds Beauty” is evident throughout, but not so much that you feel you’re watching a badly made clone. Similarities exist from the secret father and daughter relationship, to the daughter’s transformation into a beauty, to the heavy use of live music performances in both films. There’s also the eerily similar scene when the father is rough-handled by security during the climatic concert in “200 Pounds Beauty” and when the daughter is rough-handled by security during the award ceremony in “Scandal Makers.” In both scenes the main character is forced to quickly choose between continuing their onstage persona or protecting their loved ones … and it doesn’t take a rocket scientist to guess which one they will pick. Even with these similarities, “Speed Scandal” does a lot of other things right to make it stand on its own.

Tae-hyun Cha gets to unleash his biggest crowd pleasing performance since "My Sassy Girl" (possibly due to the parallels between Tae-hyun Cha's own career & Hyeon-su's entertainment career). Hyeon-su's transformation from a self centered person to a more well rounded fatherly figure is also done well - without that forced feeling. There's also young Seok-hyeon Wang who played the young grandchild Ki-dong. He will make just about everyone go "awwwwww" throughout the film. Bo-yeong Park. who played the teenage mother, has a more reserved role and doesn't really catch your eye until the more dramatic scenes later on in the film. During these moments you do take notice of her. The musical soundtrack also features plenty of nostalgic Korean pop tracks to bring smiles to those familiar with those songs.

After watching “Scandal Makers” it’s easy to understand why the film became such a huge hit in Korea. The comedic elements found in the first half of the film works well & the dramatic moments found in the second half doesn’t feel unnaturally forced. As a nice addition, the resulting feel good feeling from watching the movie is likely to linger with you well after the film’s conclusion. Make no doubt it, if you’re in the mood for a feel good comedy look no further than “Scandal Makers.”