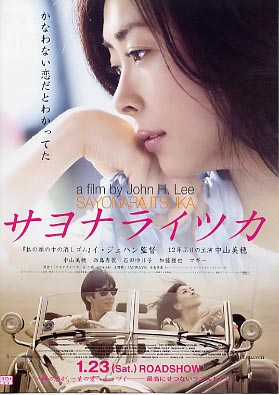 Higashigaito Yutaka (Hidetoshi Nishijima) is transferred to the Bangkok branch of Eastern Airlines. In three months, he will marry Michiko (Yuriko Ishida), a relative of the airline’s founder, and though he doesn’t love her, he knows he could be CEO one day if they wed. In Thailand, Yutaka meets a girl, (Miho Nakayama) Toko, at a bar and is instantly drawn to her. His relationship with her only intensifies as the wedding date approaches but eventually decides to break up with her to proceed with his wedding. Twenty-five years later, they bump into each other and realize their love for each other remains, but reality pulls them apart once again.

Al Feb 24 2018 4:33 am it's a sad movie indeed. from my point of view, this story reflects the greed of the man himself. He want both love and power. To be honest, even this is a good movie i hate the idea of it since this typical of 'affair' is a betrayal. He should convince himself about the matters

Clarkdale44 Nov 20 2013 8:42 am Fantastic movie... Miho Nakayama's best performance. Story is great. Ending is sad but its still a masterpiece. I don't have anymore words to describe it.

Rosiene Aquino Mar 27 2013 3:21 am The movie was intended to captivate each one's heart wether you are attached or not, you can shed tears to the movie As i repeatedly watch the movie another tears flow down on my cheeksas if it was my first time to watch it it was an amazing movie Sometimes, we really have to decide things which can cause us so much of pain the ratio between happiness and sadness of the decision we made is quite unproportional , and that is the reality that we have to face in.

Steve Apr 15 2012 11:49 am This is a beautiful movie of passion, love found and love lost. This is not for anyone under 30 who will not be able to appreciate the life lessons so poignantly portrayed here. Miho is a knockout, proving that beautiful women are gorgeous no matter how old they are. If you are not teary at the end you have not lived or loved sufficiently. John Lee's direction is spot on and the cinematography os wonderful.

Anthony Feb 22 2012 12:46 am What a beautiful movie! Miho Nakayama won my heart. I was very impressed with the cinematography! A definite thumbs up!

NickJ Nov 30 2011 1:16 am A beautiful and exquisitely sad movie. Miho Nakayama is wonderful.

Fraciatti Nov 26 2010 11:30 am An enjoyable movie but nothing you will remember as really touching or strongly amazing. The plot is obvious and only the warm colours of its beautiful fuzzy images are giving something more to the movie. Ah ... I've forgotten Miho Nakayama: she is always very capable and intense. Just a single movement of her eyes express a lot of sensations, more than the entire movie! Surely a mile above Hidetoshi Nishijima. Her beautiful face comes also better though years are passing by. Isn't she wasted for this movie? Yes for me!