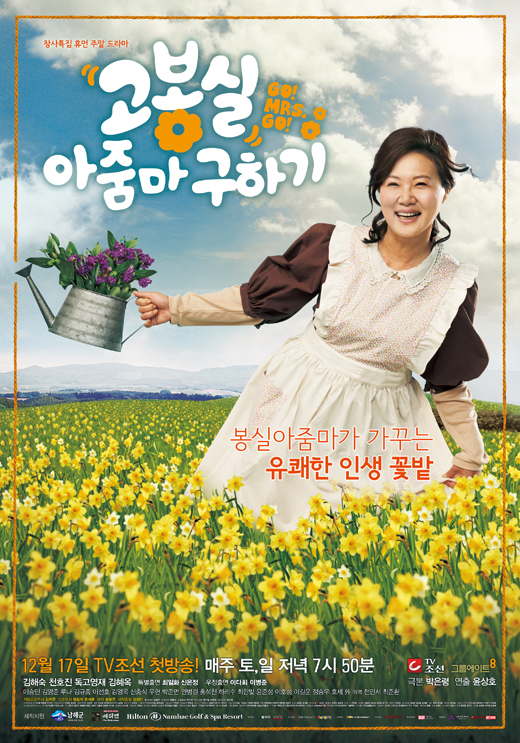 A 50'ish woman named Go Bong-Shil lives peacefully in a country village in Namhae, Gyeongsangnam-do. After Go Bong-Shil's husband passes away, her family faces bankruptcy. The family then moves to Seoul and settle down in Itaewon. Go Bong-Shil then becomes a successful best-selling writer.

Chloe-USA Oct 10 2016 9:11 pm Kim Hae-Sook and Cheon Ho-Jin: You two must be Korea's most formidable and enigmatic, most beloved actors. You two are the best combination of talent that is rare and always give award-worthy performances no matter what the role is. I love watching you two in so many projects! Never disappointed! It;s a joy just watching the way you become your character and take your audiences on the most amazing emotional ride!!! Saving Mrs Go is proof that that. The full performance is excellently cast!!! Award-Worthy and outstanding performances from Jung Seong Woo (think I'm in love!) and Choi Han-Bit (Bravo! wishing you success) - definitely want to see much more of each of you!!!!

Luffy Sep 04 2016 1:24 pm Great drama so far. The youngest daughter is way too whiny and annoying and the older daughter is kind of mean and selfish, but most of the other characters are great and it's a very good.

ChaRang May 28 2016 12:17 pm I'm loving this show so far. The only two thing I'm not liking is the utter annoyance of the younger daughters crying. It's the worse, and the oldest daughters need to control everything.

jenn May 26 2016 4:05 pm Am I alone in that I can't stand the youngest daughter and all her whiny crying poor me hysterics? I just want to slap her!

Donna Evans Mar 25 2016 5:59 pm I am from the U.S.A My family is from Korea. My mother liveed in the country. I wanted to show her this . Can I purchase the videos for her. I loved the show. Beautiful storyline.My mother also was from a well to do family . A large family . They lost everything .My mother is a very successful woman . Though she had worked very hard to achieve her success. This movie reminds me of her so much Thank you.