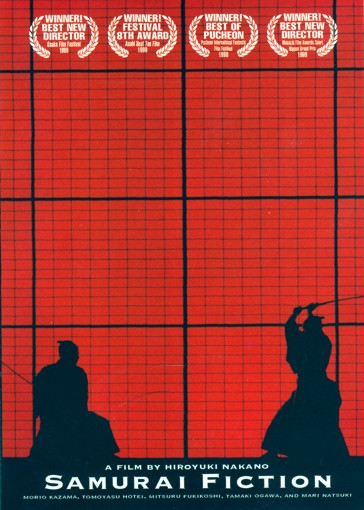 300 years ago Japan was ruled by the Shogun. His warrior administrators, the samurai, ensured good government which brought a lasting peace to a land that had been in turmoil for centuries. Heishiro Inukai (Mitsuru Fukikoshi), short-tempered and always ready to fight is just back from the Shogun's capital of Edo, where he had been mastering the martial art of fencing. The Nagashima clan to which Heishiro belongs had previously hired a renegade swordsman, Kazamatsuri (Tomoyasu Hotei), to guard the castle's treasures. Far from protecting the treasures, Kazamatsuri actually steals the clan's most precious object, a sword entrusted to the clan by the very Shogun himself. Knowing full well that if word of the stolen sword reached the ears of the shogunate, the clan would be disbanded and exiled in disgrace, the clan leaders hatch a plan to both recover the relic and install a carefully made copy.

Recently returned Heishiro, son of Clan Senior Councilor Kanzen (Taketoshi Naito), sets out to find Kazamatsuri and recover the sword. Heishiro and his two closest friends, Kurosawa and Suzuki, soon come upon Kazamatsuri who easily handles the three would-be-heroes. With Kurosawa dead and Heishiro badly wounded, Suzuki hastens back to the fief, leaving his friends in the care of a passing samurai. "Lapsed samurai" would be a better description for Hanbei Mizoguchi (Morio Kazama), a man with no official post who ekes out a living in a mountain hut he shares with his pretty daughter, Koharu (Tamaki Ogawa).

Unlike most samurai, Hanbei is a pacifist who adheres to the Way of Peace philosophy which forswears violence. As Heishiro slowly recovers from his wounds, Hanbei feeds him a steady diet of pacificist philosophy while Koharu tends to both men's material needs. Heishiro, while eager to gain revenge on Kazamatsuri and recover the clan treasure, manages to fall in love with the gentle Koharu. Meanwhile, Kazamatsuri is employed as a bodyguard by a vamp gambler in a nearby town. While bumbling ninja sent by Heishiro's father keep careful watch over Kazamatsuri, Heishiro gathers his strength for the showdown.