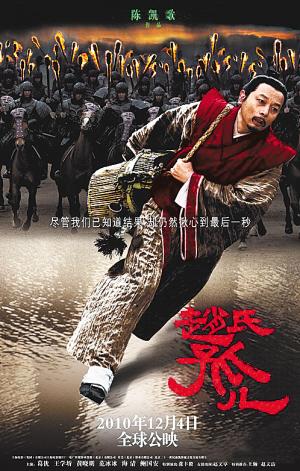 For more than four generations the members of the Zhao clan have held the highest positions in the land. Zhao Dun is currently chancellor and his son, Zhao Shuo, a general in the royal army. He is married to the king’s older sister, Zhuang Ji. Tu’an Gu, the Zhao’s arch-enemy, is not content to accept the clan’s power and influence; he incites a massacre which decimates the entire Zhao clan – over 300 members of this family fall victim to the carnage which leaves no-one alive. As her husband faces death, Zhuang Ji goes into labour and gives birth to the last Zhao. She dies after childbirth and the doctor, Cheng Ying, takes the baby into his care. This news reaches Tu’an Gu and, angered that his plan to wipe out the clan might be thwarted, he takes all the babies of the city hostage until the last descendant of the Zhao is found. The doctor Cheng Ying has also just become a father. When Tu’an Gu’s soldiers arrive to take away his son, his wife hides her own child and gives the soldiers the little Zhao, pretending that he is her child. Shortly afterwards they find the baby that Cheng Ying’s wife was hiding. Taking him to be the last member of the Zhao clan, Tu’an Gu has the boy killed. The townsfolk’s children that were being held hostage are given back to their families. The last Zhao now grows up as Cheng Ying’s son in the doctor’s house. Years go by. Cheng Ying decides to take his step-son with him to serve at Tu’an Gu’s court. Tu’an Gu becomes a patron of the last Zhao. But Cheng Ying has other plans in mind – plans in which his step-son will play a central role. -- Berlin Film Festival