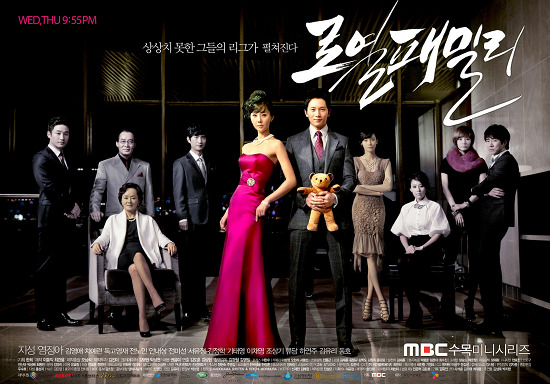 Han Ji-Hoon overcame an underprivileged childhood to pass the judicial examination and become an elite prosecutor. Kim In-Sook lives in the shadow of a Chaebol family, but finally becomes the head of a large corporation.

For Han Ji-Hoon (Ji Sung), Kim In-Sook (Yum Jung-Ah) is the woman who made his difficult life tolerable. Ji-Hoon grew up in an orphanage. He once became the prime suspect of a murder just because his teddy bear was found at the scene of the crime. During that time, Kim In-Sook sent the best lawyer to take up his defense. Ji-Hoon was cleared of the charges. Without Kim In-Sook, Ji-Hoon's life would have been destroyed. Instead, Ji-Hoon eventually became a star prosecutor after he caught the criminal who committed the murder in which Ji-Hoon was the first suspect.

Kim In-Sook has lived in the shadow of the powerful JK family for 18 years. She is the daughter-in-law of a chaebol family, but ignored by her in-laws. Making matters worse, her husband died in a helicopter accident. In-Sook's mother-in-law, Kong Soon-Ho, planned a conspiracy to make In-Sook appear incompetent and take custody over her son. The end result would have been Kim-In-Sook's expulsion from the JK family.

Ji-Hoon watched In-Sook at her husband's funeral. He was stunned to see In-Sook's beaten down appearance. Furthermore, Ji-Hoon learned of her mother-in-law's scheme to oust her from the family.

Ji-Hoon then set the goal to make In-Sook the head of the JK family. While he struggled to accomplish this goal, Ji-Hoon realized his feelings towards Kim In-Sook wasn't from a sense of pity or compassion. Rather, Ji-Hoon was in love with In-Sook. Finally, he accomplished his goal of having her become the president of the JK group.

But at that time, Ji-Hoon learns of a homicide involving a black male. As he digs up more information on the case, the cluse all point to one person - Kim In-Sook. As he gets closer to the truth, the more he doesn't want to know the truth ...

SHT Mar 12 2015 12:35 am Jesus, Lee. She's within her rights when she acts within the restrictions of the law. What you listed is plainly illegal.

Lee Jul 26 2014 6:25 pm it was basically enjoyable. but near the end i thoughtt the writers put in a deus ex machina element which seemed a bit much -- blackmail to achieve a desired seemed to me, to be cheating and not really a legitimate way for the heroine to "win".

also, except for a few instances of ruthlessness -- fabricating mental illnes, forced detention, and plotting a murder, i thought the chairwoman, while not a nice human being, was well within ber rights in terms of her actions. it was her money and fortune and she had a right (within the bounds of the law) to bestow on whom she chose.

Lee Jul 18 2014 11:10 pm kim yong pil -- he seemed to have exactly one facial expression whenever he was onscreen - "frozen". not a good quality for an actor to have.. it made it hard to empathize/connect with him as a character..

JC Feb 18 2014 10:37 pm Royal Family was such an amazing and intense drama! I decided to watch it because of Ji Sung as all his projects are among my favorites but once the story began, it caught my interest right away and it only kept getting better. The drama was full of suspense and plot twists that really keeps you engaged throughout the series. Though I started watching it because of Ji Sung, every cast member played their role excellently.

For me, I feel that a drama is good when it leaves you with a deep impression after it ends, making you miss the journey and sad that it has ended, so I highly recommend this drama.

Sally Jan 24 2014 6:36 pm I just finished watching this drama and i loved it! It is so deep and intense. I am sure many viewers won't be able to handle the depth and subtleties of the fight of good and evil and the world of karma. Heavy drama. Great writing and acting. I even liked the end... it made sense to me to end it that way. South Korea you really impress me with your intelligent and deep K-dramas. Thank you

Clarkdale44 Jan 08 2014 11:42 am What am i supposed to write for such drama...Firstly it was not my type but as Ji Sung was in it, i thought i should at least try. I must warn all, from romance prospective i don't think there is any in this.. All are talking about how to gain profit and become the heir of their company. I have never seen such a family, every member talk like they have their own country or something and others can't step on. It was stupid of me to watch it i wasted my 15+ hours on this shit for nothing. I told myself lots of time that i should stop watching it but somehow i kept on my streak. Casting was superb by both Yum Jung-Ah and Ji Sung, Casting is the only thing i liked about this drama. The suspense level of this drama is too much... There were many times when i wanted to smash my head on the wall, but i kept going and going until final episode. The conclusion is this drama was not for me, there is no romance. Waste of time for me. It is for those who likes suspense, and who doesn't care about romance.

Don't read further if you have yet to watch the drama. I just don't believe how could someone have so much hatred like this grandmother. She betrayed her own son to give up his own shares of JK Medical. I simply cannot understand the whole family. I am regretting why i watched it. Even if someone gives me money to watch it again... I would not do so. All this drama has is this stupid mystery. The ending is even more weird, well i knew the grandmother has something up on her sleeves, as she stated she won't die alone, she will take K with her.. After K and Ji Hoon flies back to see grandmother, they goes missing.. Well i think they died, (That Richard guy must have done something to the helicopter) what else can be said...! I am coming to this conclusion because there is no way K would leave her son Byeong-Joon just to live happily with Ji Hoon after becoming the president of the JK Group. I also didn't found any chemistry between K and Ji Hoon, i also don't think K has any special romantic feelings towards Ji Hoon. She just treats him like a Noona.

CICI May 03 2013 4:39 pm I just finished watching "Royal Family" and I thought it is one of the most suspenseful dramas I've seen in a long time. It kept me guessing and intrigued until the very end. Many of the actors & actresses are favorites of mine from other shows and I think Yum Jung-Ah and Ji Sung were magnificent. I highly recommend watching this.. I hope the ending was preparing us for a sequel. I'd definitely love a "Royal Family 2" with all the same people.

Lis Jul 13 2011 8:41 am Amazing plot, amazing story. Every episode has an interesting twist. Good work to all actors and actresses!

kiara Jun 22 2011 8:19 am I think the author in the middle part have been forgotten, The film shows several scenes Johnny with his teddy bear Even the prosecutor review of airport security files But Ji Hoon is still accused Second, how formal it is common in Korea the kids love men and women that they support them The age difference does not matter I think the pure incentive is destroyed when it involved in sexual relationship. so pity of these actors.

gottalovehae Jun 04 2011 5:35 am one of the interesting dramas i've seen. very emotional, powerful-- great performance from the actors.

however i'm quite disappointed with the ending. the writers botchered it. :(

but it's a nice drama overall. i like some of the scenes especially those between yum jeong ah and jeon mi seon, or kim young ae. the three of them are indeed great actresses.

Metaverse Apr 14 2011 1:05 am The best K-drama I've ever seen! Ji Sung is a very good actor, love to see him playing prosecutor Han Ji-Hoon. I hope he will get an award for this role!

jmhadl Mar 26 2011 3:11 pm i love the first episode i hope someone will sub the rest episode to english... im looking forward to watch the other episode