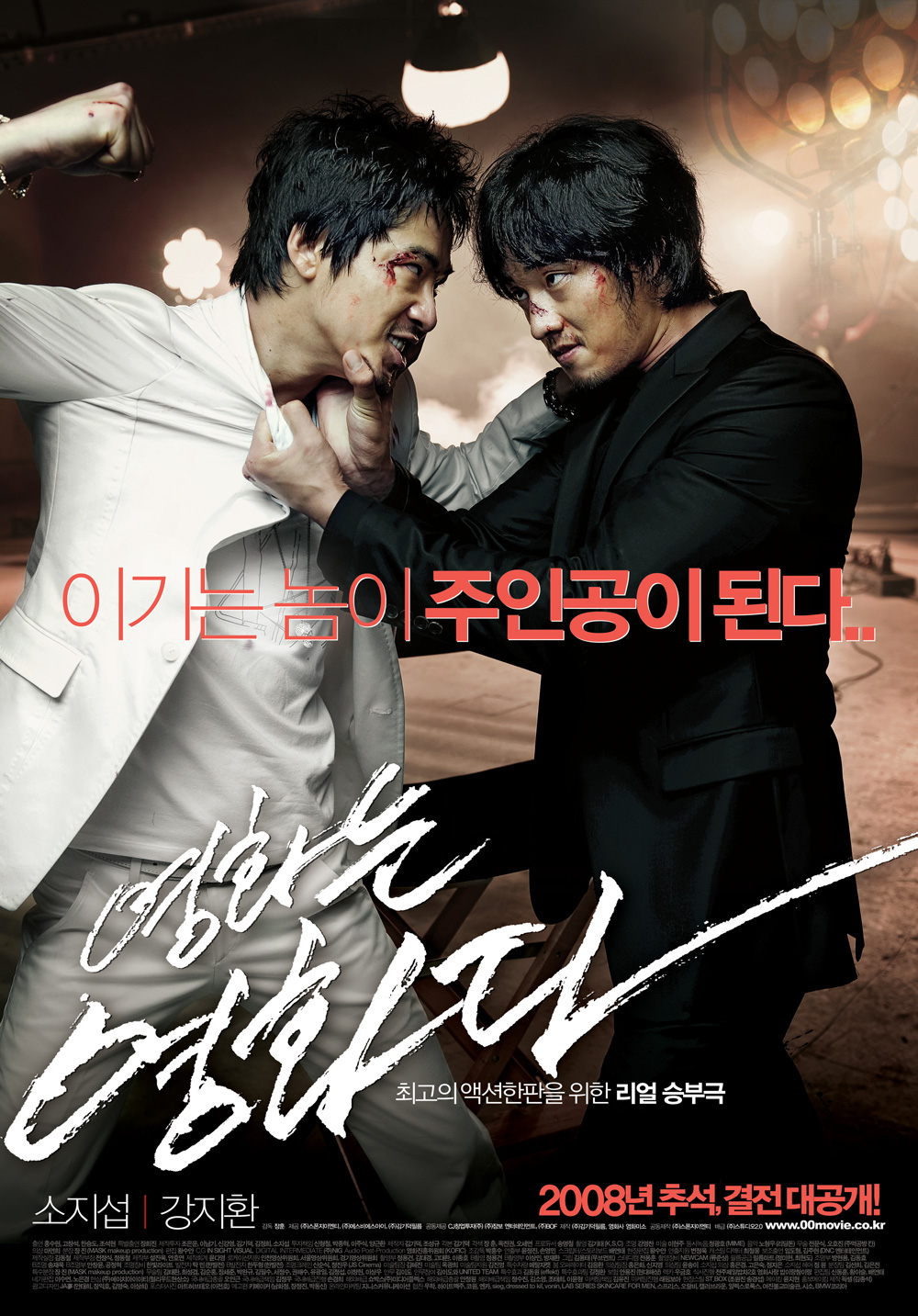 Gang-Pae (So Ji-Sub) has risen to the #2 rank in his mafia organization by using unflinching violence. Even though he has made his name by his violent nature, Gang-Pae has a softer side and loves nothing more than to catch a matinee showing all by himself. Meanwhile, Su-Ta (Kang Ji-Hwan) is a popular actor who has a similar violent edge. Su-Ta has already knocked one actor out of commission while filming a fight scene.

One night, Gang-Pae hears that Su-Ta is drinking in the same bar and he orders one of his men to get Su-ta’s autograph. The short-tempered Su-ta refuses and this leads to a confrontation between Gang-Pae and Su-Ta.

A few days later, Su-Ta critically injures another actor while filming a fight scene. Filming now comes to a halt, because no other actors are willing to perform alongside the short tempered movie star. Su-ta then thinks backs to his confrontation with Gang-Pae and recalls Gang-Pae mentioning he performed as an extra in a film before. He then contacts Gang-Pae and offers him the co-starring role. Gang-Pae is willing to take the part, but only if they are to do the fight scenes for real. 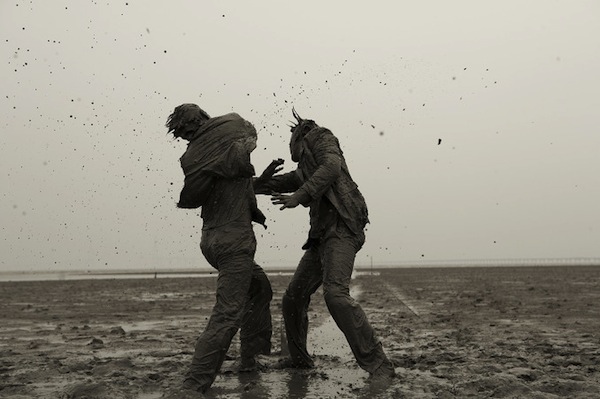 Arihant Dec 04 2017 6:37 am I don't normally like Kim ki Duk movies (too much sex,Gore,violence for my taste) but this movie scripted by him was Electric..Maybe a different director with a more commercial bent of mind helped but the end result was awesome.I saw this close to 7 years back but the experience remains fresh.

This was the first time i saw so Ji sub and I was blown away with the intensity he brings to this really different role.Also was surprised by Kang Ji hwan(had only seen him in My girlfriend is an agent earlier).

This movie is a true example of no frills filmmaking being used to maximum impact,investing huge belief in actors abilities.I literally had my jaw open through many scenes at how strong this film is stylistically.

One of those rare movies about movie making that actually had something to say.

Margeaux May 04 2016 3:56 pm What a movie! Such a unique storyline, portrayed with such passion and raw gut as well as skill. Ah, what more can I say?

So Ji Sub, you were absolutely superb in the movie. You got me to feel for Gang-pae as a human being. I also felt that juxtaposing the two main characters and the profound meaning in the way they portrayed themselves and the way they were living their lives was awesome.

Such a beautiful story. It was so gripping that I felt it was short! The fight scenes were great but at the end of it all, it was the vulnerability of Gang-pae that got to me.

Please keep on acting to showcase your awesome talent.

kallang riverside May 24 2014 9:32 am Can I simply just say what a relief to discover an individual who actually understands what they're discussing on the web.

You certainly know how to bring a problem to light and make it important. More and more people should read this and understand this side of your story. I can't believe you're not more popular since you surely have the gift.

faranak Feb 11 2014 3:59 pm woah!! breath taking !! so great ..so ji sub is a wonderful talented actor..i really believe his acting every time i watch a movie or serial of him,,,love him

shakira Feb 09 2014 1:22 am Everytime I see Ji-Sub in anything, I fall in love all over again!! Yet another great movie of his. I was having this conversation with myself, since I watched it alone, whether Gang-pae's last act was out of survival or acceptance of who he is? Or both? I love a movie that leaves you with food for thought!!!! I give it a big, shiny, bright 10!!!

Adrienne Feb 02 2014 1:52 am I really enjoyed this movie mainly because it avoided so many of the cliche gangster scenarios. So Ji Sub certainly stole the show in this one. His natural charisma while playing such a complicated character made the movie very interesting. There were certainly a lot of clever visual choices throughout the movie (example Ji Sub's character the gangster is always in black, where you find Ji Hwan, the movie star, usually in white showing the status in reality), a lot of bloody fights, and a brilliant ending that leaves you frustrated, wanting more, but very satisfied. All in all I'd give it a 9/10. This is why I love watching foreign films that break the Hollywood standardized script. :)

In this movie is quite better because they do in dark. Lol. And not so long. Lol. Peace.

maria Apr 01 2013 6:35 pm Wow! I accidentally discovered another great Korean movie! I loved all the elements of this film. And thanks "Ki" for your review of the movie (12/06/08). I will follow the lead actors' careers with interest.

Farah Fauziah May 10 2010 9:18 am I just love this movie!! i think so ji sub very good portrait gang pae the gangster and kang ji hwan really suit the role and they are compatible each other great storyline with the great actors!! what an incredible movie

and the very last scene was so intense !!!! typical kim ki duk !!! i remember another movie with an ending as qualitative as this one : TIME (by kim ki duk)

James Iha Oct 03 2009 9:36 pm Dark comedy, berserk and one of the finest movie of the year (I'm not Korean). The 'Gang-pae' character was quite immense and only those with cold-hearted and adamant soul suit with the character portrayed. Brilliantly played by Ji-seob and I wonder none other than him or Charles Bronson can take the challenge.

Ki Dec 06 2008 5:03 pm Something off the beaten path in the Korean “gangster” film world, is “Rough Cut,” with the literal Korean title “Movie is a Movie.” The film’s director Jang Hun isn’t a name you’ll recognize instantly, but like the 2008 film “Beautiful” (Arumdabda), “Rough Cut”’s producer & writer is none other than Ki-duk Kim. Jang Hun has previously worked as an assistant director in Ki-Duk Kim’s “Time” - a film that shares similar lensing qualities and identity issues with “Rough Cut”. But with that said, “Rough Cut” isn’t as cryptic as your average Ki-duk Kim film and, consequently, a whole lot more accessible for the masses. The film features a superb performance by Ji-seop So, which has already helped him land the lead role, alongside Ziyi Zhang, in next year’s Chinese-Korean Romantic-Comedy “Sophie Revenge.”

With the movie's interesting premise, “Rough Cut” weaves an unpredictable path between gangster film, the movie within a movie, and character study of two seemingly disparate characters who are shown to be a lot more similar than originally thought. The movie also exhibits a quirky sense of humor, with plenty of insider jokes. The names of the two main characters jumps out immediately: Gang-pae and Su-ta. “Gang-pae” is the Korean word for “Gangster” (a gangster named gangster) and “Su-ta” is a play on the English word “star” (a movie star named star). Meanwhile, the fictional director in the movie is named “Director Bong”. You probably know of another famous director in Korea named Bong, who directed the Host (a movie that got Ki-duk Kim in a lot of hot water after he made negative remarks about the film’s dominance over the Korean box-office market). You’ll also see snippets of Korean classic gangster pic “Green Fish” shown in “Rough Cut” (first time when Ji-seob So watches a movie alone in the theater and second time when Ji-sob So is superimposed into a scene in “Green Fish” as a car driver).

With these humorous jokes aside, “Rough Cut” then delves into parallel stories involving Gang-pae’s gangster life, the filming of the movie within a movie, and Su-ta’s personal life. If the story seems complicated don’t worry, the story itself is linear and doesn’t bother to delve more than skin deep examining those issues. The film’s focus is rather on two men and their violent confrontation on screen. Ji-seob So strikes an incredibly charismatic figure. Using a calm demeanor that anoints a monsoon of emotions underneath, Ji-seob So gradually takes over the film, until literally “Rough Cut” is his movie. His counterpart, and good friend in real life, Ji-hwan Kang, performs adequately as “Su-ta,” but there’s a country mile difference between those actor’s screen presence.

What “Rough Cut” has to offer is a tantalizing premise and that eye-popping performance by Ji-seob So. The movie also has plenty of energetic action sequences, the final duel between Gang-pae & Su-tae being particularly memorable. The movie’s drawbacks would be the lack of depth in addressing the duality of the main character’s selves & the bad habit of becoming too much tongue-in-cheek at times. In particular, “Rough Cut”’s plot relies on Gang-pae committing a gaff that no series cut-throat mobster would commit in real life, but again, going with the whole “film within a film” theme, this gaff is an all to common occurrence in gangster movies and, such, “Rough Cut” proudly uses it to make its screenplay work. No doubt, there would have been more impact without relying on this trite error in judgment, but, nevertheless, “Rough Cut” has what it takes to win you over with ease.