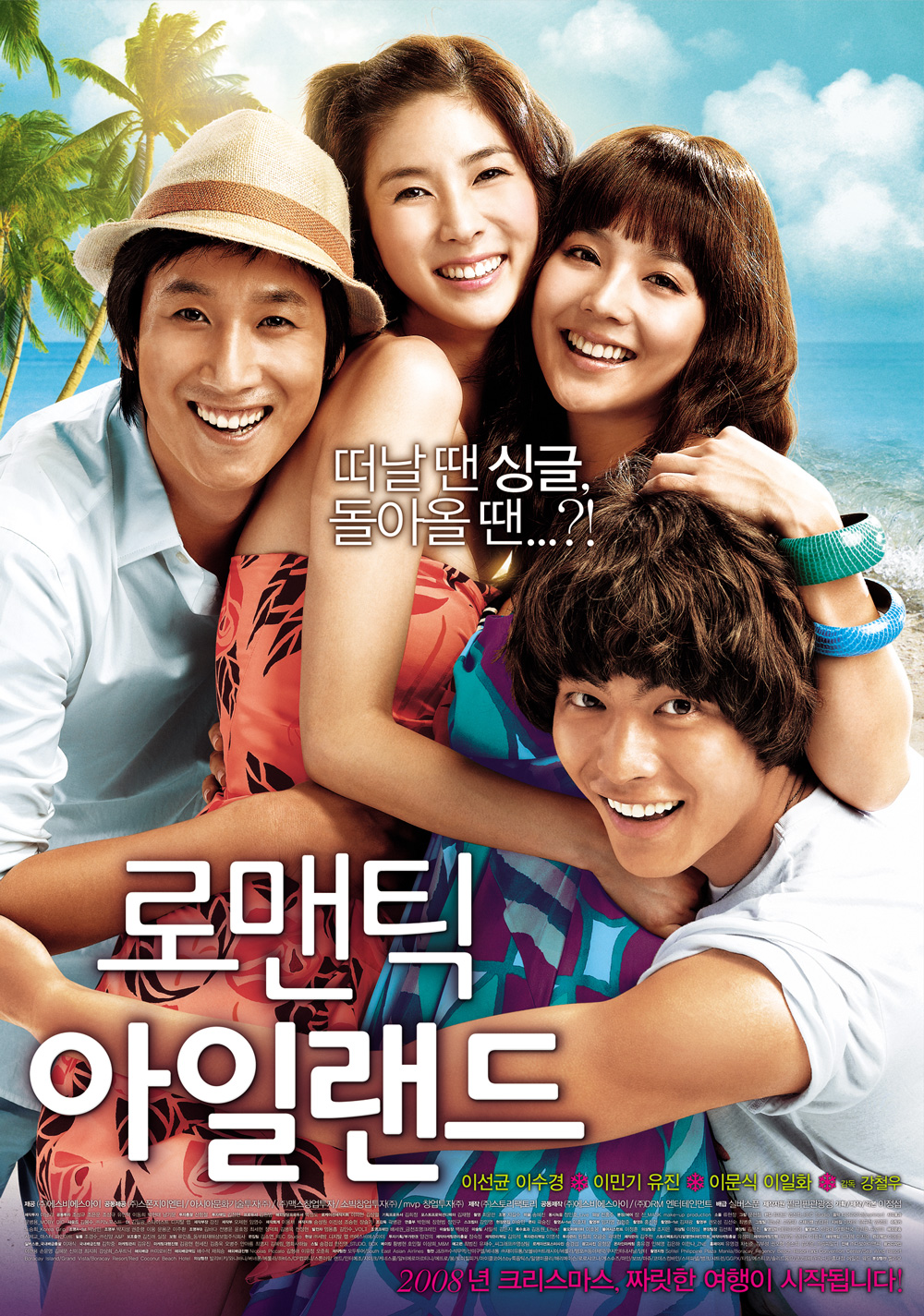 In “Romantic Island” three couples pair off after arriving in Manila, Philippines.

The first couple are a middle-aged husband & wife tandem that are taking their first ever trip overseas. The husband (Lee Moon-Sik) has never taken his wife anywhere before, but he has reasons for taking her on their first trip. The husband has a brain tumor and he plans to end his life in the Philippines for insurance money.

Convenience store clerk Jung-Hwan (Lee Min-Ki) is offered a free ticket to the Philippines by a friend. Although Jung-hwan is broke he is more than happy to go, especially to forget his ex-girlfriend who dumped him because of his inability to find a better paying job. At the Manila airport, Jung-Hwan is stunned when famous Korean pop singer Yu Ga-Young (Eugene) approaches him to use his cellphone. For Ga-Young, coming to the Philippines is a spur of the moment decision to get away from the pressures of making her next album.

Soo-Jin used her entire savings to come to the Philippines Her home life is a mess and she is in part running away from her family. At her hotel in Manila, she encounters a fellow Korean named Jae-Hyuk (Lee Sun-Kyun). Jae-Hyuk is a successful businessman that came to the Philippines for family matters. His long estranged father, who re-married in Manila, has passed away. Soo-jin accompanies Jae-hyuk to meet his step-sister. 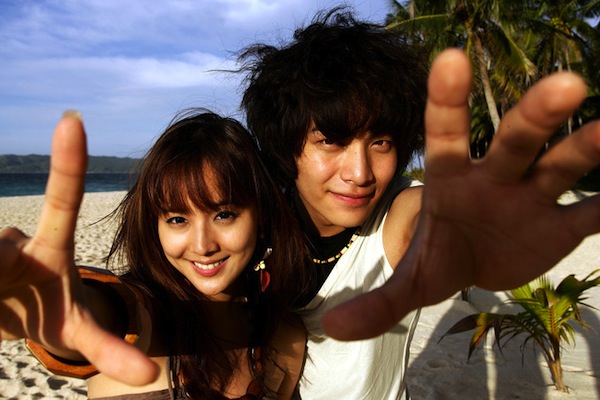 Mimie Jun 14 2016 12:16 am I really really love Eugene, she was so pretty and her acting is so adorable. I was amazed that one of her movies titled "Romantic Island" was filming here in the Philippines... :) Saranghae unnie...<3 Fighting.

Kate Oct 12 2014 6:56 pm I only intended to watch it because of Lee Sun-Kyun, then the movie started reeling with that Boracay, Philippines advert!!! Yay! A feel good movie :)

Hyo Rim Jun 21 2014 10:21 am This movie isn't just about love story... it doesn't only focus on romance, it tackles about life.. so don't be upset if it's lacking in romance, because not all movies are meant to be full-romance just because the title says something about romance... Maybe they named it "Romantic Island" because when they went to the Philippines that's where they found love and share love to others, like the middle aged tandem of wife and husband. He took the assasination back because he cannot afford to leave his wife and daughter because he loves them too much and realized that if he loves his family why would he give them more burden; then the tandem of the popstar and the clerk. they fell in love not because of their profiles, but because they really love each other; and the businessman and the runaway girl. The businessman was too workaholic and was too serious about everything about business and he doesn't get along with his employees and with his father because he doesn't even know how to love and value people, but because he met soo jin, he finally learn on how to love, respect people, and loosen up in life to atleast have fun. while Soo Jin, she came back home although she's already tired of working for her family, she did that because she loves her family and she doesn't want to leave them behind on their own. all these three tandems found and realize what true love while they're staying in the Philippines with those people who made them see, feel, and taste love, so I guess that's why they named it romantic island although t doesn't really focus on romantic things. This story is more on real life situations that really happens in real life people...

Kinoko Jun 15 2014 11:24 am Completely terrible movie. No romance, no action, no drama. I only saw that movie because was Min-Ki in the cast. What a waste of time!

Ree May 25 2014 11:40 pm This movie was severely lacking. Not much romance, comedy or drama. With a minimal plot, great acting talent that was wasted in this movie and a slow pace, this movie doesn't impress.

The only saving grace is the scenic beauty of the island of Philippines.

angela May 11 2014 5:13 am nice movie, it really show the beauty of Philippines but it show as well how's the filipino really are, like the thief and the kiddos that was assigned to kill the koreans, lucky that they're just kids and just follow how there grandfather thougth them how to shot a gun, anyway its just a movie

Cathy Feb 23 2014 1:10 pm so glad I came across this movie while looking for a Korean romcom to watch...surprised to know the romantic island is our country's very own pride Boracay! I love the actors and actresses great chemistry

Marie Aug 23 2013 8:48 pm I was so schocked to see that poster with PHILIPPINES at the start of the movie & immediately guessed the Romantic Island meant by the title is Boracay Island. well i just guessed it right! ^^ was even more stunned to realize they're filming almost the entire movie in Manila & Boracay, not to mention there's Eugene!. I never heard of this before, a korean movie shot in Ph. i thought "No Breathing" was the first, the cast & crew jst recently went to Davao to shot some scenes.

Ronaldo Sep 29 2012 2:29 pm I'm proud to be pinoy. Even me had been surprised that there's korean movie filmed in the Philippines. Anyway, since I'm workaholic and no much time before to watch, it's understandable why I'm not aware of it...hehehe....For Adiya...the title of the song is Otso-otso sung by bayani agbayani

Jon Mar 05 2012 6:57 pm Nice movie to watch on a snowy day! Cute movie and beautiful location. The cast are perfectly matched and enough drama to satisfy drama fans. Worth watching!

Adiya Nov 06 2011 6:00 pm What's the name of the really fun dance song that's playing when Jung-Hwan and Ga-Young are dancing in the club.

mabinogi Oct 20 2010 9:50 pm i just bought a copy of this movie from cd store here in manila, i'm just curious coz it was filmed in the Philippines (manila & boracay) although this was not release in our country (or i myself didn't heard from the news) but thanks to the director of this movie for exposing one of the greatest gift of God to the Philippines (the wonderful white sand of Boracay).. overall, it was a great romantic comedy movie that would add up in my collection... I noticed 3 things in the beginning of the story that was so sad to think about, i feel sorry for my fellow filipinos that even in the foreign films like this we are being seen as 1st manloloko (someone who deceives others for their own gain) although, it was shown that their fellow korean made it to them but we cannot hide the truth that it was happening in the country..the 2nd one was a motorcycle man took their money in just a flash and lastly the rudeness of the jeepney driver who just past them without thinking that they might get wet from dirty canals, hope this would be a wake up call to all of us filipinos to have a good image, not only outside the country but also in our home country...foreigners admired us for having such a paradise resorts and nature blessings but we are not being so proud for it..anyways, di naman lahat ng Filipino tulad nilang mang-gagantso, meron din namang mababait at super hospitable..at yan ang character namin na nangingibabaw sa ano mang lahi sa mundo

FREDDDIE Mar 02 2010 10:15 pm This is absolutely the best smart Korean movie I have ever seen. Pretty ladies and handsome men. Honestly very good scenery! like Boracay, They should have filmed it all over the Philippines. Tourist spots like Luzon, Visayan and Mindanao.

I have a crush on Eugene and Lee Su-Kyeong gorgeous and intelligent women.

krijha Jan 17 2010 2:20 am uhm..im flattered that the setting of the movie “romantic island” is here in my country. ive never heard yet that the korean wants our country to be the venue.. hehe

i have to watch this movie…it’s interesting huh!!!

KC Jan 10 2010 8:55 pm yes micca it's Katrina Halili. anyways, the movie's nice. it so nice that they really included the culture of the Philippines. there's the anahaw fan, the tinikling dance and many more. :)

Daymian Pacayra May 31 2009 5:12 am I love this movie... But Boracay is'nt only the greates places here in philippines.. They should also go to chocolate hills and water falls... and they should also stay in the Shangrila Hotel.. that hotel was so beautiful...

proud to be a filipino...

micca May 16 2009 8:52 am i was shocked when i saw the first part where there's a billboard/poster w/ "PHILIPPINES"..and i guess the lady on the beach in the poster is Katrina Halili(filipina actress)..can someone confirm?is that her? wow, bora is really a nice place..romantic island indeed...:)

Jennifer May 11 2009 10:11 pm I feel like I am the only one who isn't loving this film. By all means, it has very cute couples, and does make you feel ooey gooey good at the end. But have seen other "multiple romance" movies, this isn't the best I have seen. I think what turns me off is that the stories have very little in common. The only thing that is connecting them is the Philippines and the "gun" issue at the end. Instead I think it would have been nicer if they showed them as different shorts having the story play out all the way through.

But don't misinterpret and think this is a bad movie to watch. If you like any of the actors on the poster, you'll love it. Even if you don't, there is a pretty good chance you'll still love it.

Gemma Apr 15 2009 9:28 am OH MY GOD, I JUST FINISHED WATCHING THIS! IT'S ONE OF THE GREATEST-FEEL-GOOD-ABOUT-YOURSELF FILMS I'VE EVER WATCHED! All the cast shines with their acting and faces, it is a true relaxation watching this :) A nice twist to a boring plot, as well as contrast to each pair. I rate it 4.5/5 :D

Ki Apr 12 2009 9:24 pm Having watched a lot of heavy films lately, I did have a craving for something lightweight and fun. The South Korean movie “Romantic Island” fortunately hit the spot just right. The film features three couples that go the Philippines for fun and there are a few surprises thrown in along the way. “Romantic Island” does have the look of a television drama and at times goes down the melo-drama road familiar with TV dramas, but fortunately those melo-dramatic moments makes up only a tiny portion of the film. If you don’t have time to get away, watching “Romantic Island” will at least give you a temporal feeling of excitement.

So what’s to like about “Romantic Island” you ask? Well that exuberant feeling of taking your first overseas trip is palatable throughout the film. The movie also does a good job of bringing out the flavor of the Philippines island. The characters are all likable, especially the younger couples. Someone that stood-out was Lee Su-Kyeong who played Soo-Jin aka Alice. Although I have never noticed her before (she played the sister in serial killer film “Rainbow Eyes), I will make a note of her as she brought out a whole lot of perky charm to the screen. There’s also model turned actor Lee Min-Ki (”A Good Day to Have an Affair”) turning in another on the money performance as the star struck love interest of Eugene.

A few scenes towards the end of the film (involving each couple’s deepest problems) does drag the film down a notch. As stated earlier, those scenes are brief and doesn’t place a complete damper on the film itself. There’s also a surprisingly affective sub-plot involving kids hired to murder one of the Korean vacationers.

Mun Go Nee Apr 05 2009 4:19 am I just watched it via youtube and really liked it. Eugene's quite cute and Lee Seon Kyun's so romantic;I luv his character. Do not miss watching it!