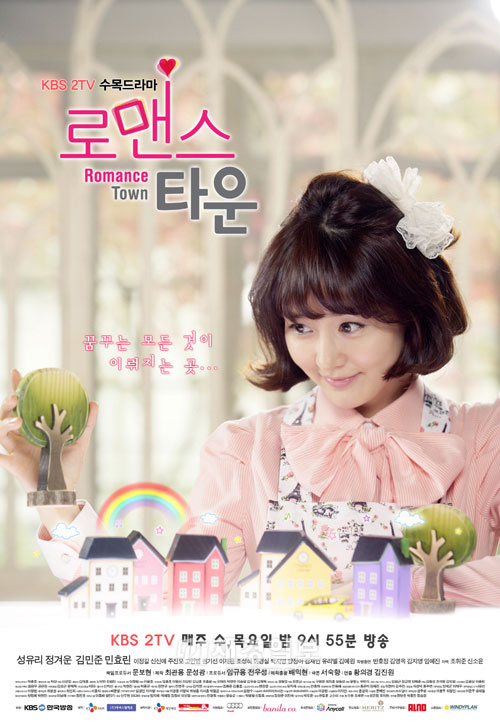 A young woman, whose mother and grandmother worked as a housemaid, finds herself working as a housemaid. One day she wins the lottery and faces a turning point in her life ...

Soon-Geum's (later played by Sung Yu-Ri) mother and grandmother both work as housemaids. Soon-Geum's mother, who never had the opportunity to go to college - vows to send young Soon-Geum to a university so she won't work as a maid when she grows up.

Soon-Geum is a junior high school student, but she isn't interested in studying and is frequently scolded by her teachers for absences. Soon-Geum works part-time jobs as a waitress and also as a dancer at a night club. One night she goes to a night club to check on her friend Shi-A (Kim Jae-In) who is dating an older guy named Young-Hee (Kim Min-Jun). At that time a police raid occurs and she is taken into custody as a minor. At the police station Shi-A, Young-Hee and Young-Hee's friend Gun-Woo (Jung Gyu-Woon) are also there. When Soon-Geum's mother arrives she goes after her daughter with a broomstick. Later they argue with Soon-Geum telling her mom she doesn't want to go to college and would rather work or get married. That night Soon-Geum's father runs off with her mother's savings only leaving a note saying sorry.

Years later, her mother has passed away. Soon-Geum is carrying Shi-A's baby on her back and goes to a room salon to find Shi-A. Gun-Woo also goes to the room salon with his friends and passes out. His friends leave him sleeping in the room salon. Soon-Geum and Shi-A goes into the room where Gun-Woo is passed out. A waiter comes in and mistakes Soon-Geum as Gun-Woo's girlfriend. The waiter asks Soon-Geum to pay the bill for Gun-Woo who lost his wallet. Soon-Geum unable to talk her way out ends up paying the waiter with her rent money. To get her rent money back she goes with Gun-Woo to his house, but on the way there she receives a phone call that her father took her deposit for the apartment where she stays with Shi-A and Shi-A's baby. She leaves her number with Gun-Woo and leaves.

When Gun-Woo arrives at home, his father (Lee Jae-Yong) is there and asks for a favor. Gun-Woo's father recently remarried to a much younger woman known as Trophy (Yang Jeong-A). When they came back from their honeymoon a mini-crisis ensued. A grandmother brought a baby to their home looking for its father. Gun-Woo's father asks Gun-Woo to say that the baby is his, so his new wife won't get mad at him. Gun-Woo is planning to go to New York to study so he won't even have to look after the baby.

Meanwhile, Gun-Woo's stepmother finds a napkin with phone number scribbled on it in Gun-Woo's room. Believing the phone number might be the number of the new baby in their house she calls her for a meeting. Soon-Geum believing she will get her rent money back eagerly agrees to meet. After the meeting, Soon-Geum finds herself working for the family as their new maid. Gun-Woo leaves for New York.

Gun-Woo then arrives back from New York. He remembers Soon-Geum and tells her that he did try to call her. Gun-Woo also learns that head housemaid Yoo Choon-Jak was fired and Soon-Geum was hired in her place. Gun-Woo was extremely close to Choon-Jak and fires Soon-Geum hoping to get her back. Soon-Geum is depressed over losing her job. One day she eats cheap black noodles in a Chinese restaurant when she discovers that she won the lottery - 14 billion WON ($13 million USD)!

lrt Sep 10 2018 5:51 pm Personally ..I like the ending. Soon-Geum is not the only one who can pretend to never receive a money windfall. This drama is all about what money is and isn't. Now you have it and then you don't....and rags to riches...riches to rags. The drama gets better with every episode. Hopefully someone likes you for who you are not what you have. Worth my watch!

Kyblbrd Sep 15 2016 8:39 pm Has nothing to do with romance. Boring and rediculous. Two cute guys and that's all ya got here.

Lee Dec 15 2015 10:26 pm generally, fairly stupid and buffoonish. The scene where some of the protagonists leave the money in the hotel room is contrived and unbelievable. And the actions of these protagonists, in terms of how they attempt to "distribute" the money is fairly despicable and contemptible. Also, their mindless stupidity and lack of general common sense in terms of how they handle their newfound wealth defies belief. It seems unlikely that *anyone* could be so incredibly naive and stupid.

There's a scene where the father blurts out re: his daughter's new found wealth and I'm thinking, "what a f***ing loser.. what right did he have to out her ?" Yet, it's handled as if it were an admirable action.

The cast seems fairly strong and play their parts well, but because the script is so buffoonish and contrived, it largely ruins the drama.

Because this drama is The best drama i've ever seen. A lot value in this drama that can teach us not to became person who are greedy. Because money and Wealthy are able to corrupt people to the worst version of them.

Lie Kwang Wei Feb 05 2014 7:06 am hm, I'm just finished watching this Korean drama. (Note : I'm actually didn't like to watch drama movies, but this one is just something different who catch my attention) Romance Town, actually it has an interesting storyline. Also, the actors are very good in playing their character. Somehow the story is very much alive, and it does make sense to me. very fun to watch. But, I'm just want to give my opinion about Romance Town. It has too short episode! I mean, c'mon, the ending?? it is not a good way to end a story like that. there are a lot of unfinished plot.

1. What happened to the maids after at least 2 years (they can't stay rich forever by just staying at home) there supposed to be a story about their daily life as a rich people, just like Soon Geum who run a family restaurant with her father. what about the rest of them?

2. what happened to Kang Tae Won, Gun Woo's step father after everybody leaves him alone with Kang San?? at least tell a little bit about his activity during his loneliness.

3. And what about Gun Woo? I mean, the ending about him that he is poor and just that?

If they made just one more season, that would be great. the story would be even more interesting if the rich maid do something risky with their money (like gambling or whatsoever) and they make stupid decision. also, Gun Woo's father, it would be interesting if he feels very lonely, and without knowing his second wife... errr, what's her name? Trophy...??? works in there ( I forgot where she is working) and meet with her. awkward, huh? turn out they're getting involved on a very awkward conversation. oh, I almost forgot, and tell what Gun Woo did to his old maid's house? (Yoo Choon Jak's house that she decided to give it to Gun Woo before she passed away). how about that?

sorry, but for me, the ending is not satisfiying. in fact, the ending makes me wonder what happened next to them all?

CW Dec 30 2013 10:54 am This starts pretty slow, it isn't till you get well into the drama that it becomes more interesting. It should be called "The Maids" instead of it's title. This drama explores the idea of greed and touches on slavery. It has quite a bit of humor added to it. I ended up REALLY liking this drama, one of those little gems buried away.

I'm on episode 8 and am fairly ambivalent about continuing to watch it. I LOVE Yu-ri Sung, which is the reason I started watching "Romance Town" in the first place. The problem for me so far is that I *really* dislike the Gun Woo character. When he was fat, he let people walk all over him. Then, later, after he comes back from America, he's turned into a confident, arrogant, jerk.

He's fairly rude and nasty to Soon-Geum, so I can't see why she's into him at all. In fact, the thought of them possibly ending up together at the end makes me a bit nauseous. I think it's a bad sign when you actually DON'T want the two romantic character leads to end up together. There is a third romantic lead, but he seems unsure whether he's attracted more to money or the woman, but the fact that this is even an issue for him basically disqualifies him, in my mind.

I'm not sure how much of this is due to the writing and how much of it is due to the actor.. Of the 8 Yu-ri Sung dramas I've seen so far, this is, by the far, the weakest one. In terms of letter grades, I would give it a C or a C minus.

Also, Soon-Geum's father is too outrageously larcenous. The very fact that he gambled away Soon-Geum's college fund and then continued to try to leech money from Soon-Geum and her mother, strongly suggests that the guy is garbage. But somehow, the fact that he's her father makes it okay for her to continue a relationship with him ? This is crazy beyond belief..

picky Apr 23 2012 12:40 pm As the movie keeps going, I loose my interest because I don't believe that there are such stupid people in this world. The maids are so dumped that they drag 10 billion won around. They are so dumped that they even leave the money in a hotel room. The main actress is showing stuborn, and stupidity as the movie goes on. In all, please don't watch if you have some thing else to do. Otherwise, you'll feel angry because of those stupid people.

black_blood Apr 01 2012 6:11 pm For some reason, I wanted No Soon-Geum to end up with Kim Young-Hee. I was really disappointed because it did not end like that. Kim Young-Hee had a nice character when compared to Kang Gun-Woo. I should have stopped watching this drama when I got the hint that No Soon-Geum will end up with Kang Gun-Woo. In the end, I did not like this drama, not even a bit.

People, don't watch this drama. You will end up hurting yourself.

Donna Sep 04 2011 12:36 am I have discovered KBS and love it. I especially liked Romance Town. The two brothers are so handsome. I fell in love with watching all the characters on the show.

FableCat Jul 07 2011 8:27 am I am watching it at Kbsw channel on tv. Ngeh.. will Sungeum agree with Uhm Soo-Jung's greedy plan..? I will hate Sungeum is she agree. T_T Have to wait next Wednesday to see what happen T_T... Why do they have to end the episode with a suspense hanging...

fifi May 19 2011 9:36 am update pliz...i want to c the current rating.hope the rating will increase...i'll support this drama till the end;D